CATTLE on feed numbers across Australia for the September quarter remained at close to record levels, with only minor seasonal declines recorded in some southern states.

Driven by strong international beef demand and drought conditions across large parts of eastern Australia, total numbers on feed was reported at 1,119,329 head, down 28,064 head or 2.5pc from the June quarter, according to the results of the latest survey conducted by the Australian Lot Feeders Association and Meat and Livestock Australia.

Feedlot capacity across Australia currently sits at 1.365 million head, up about 60,000 head on this time last year. Almost all of that increase has been recorded in Queensland.

“Strong global demand for protein, and in particular high-quality grainfed beef, has certainly helped the feedlot industry sustain production levels through these challenging times,” he said. 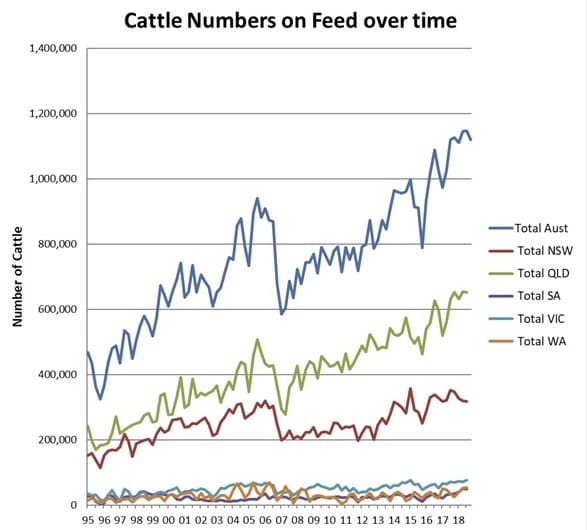 “Grainfed exports to China have increased 45pc year on year to 19,990 tonnes for the September quarter, largely fuelled by the impact African Swine Fever was having on protein availability,” Mr Cheetham said.

In line with robust demand, the Queensland 100-day grain fed steer OTH indicator rose 11pc year-on-year to average 589¢/kg cwt in the September quarter, and steadily increased to be in line with record prices set in October 2016, he said.

The NLRS feeder steer indicator averaged 294¢/kg live weight) in the September quarter, an increase of 4pc from the previous quarter and 5pc above year-ago levels.