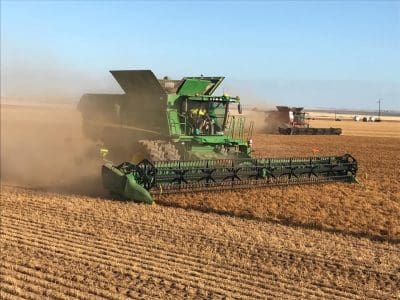 HARVEST contractors are having to make some tough decisions after a bumper season was disrupted by widespread rain and flooding across New South Wales.

The rain has interrupted the normal procession from Queensland, through New South Wales to Victoria, meaning some contractors will have to come back up north later this year or next year. With downgrades from the flooding, many are expecting plenty of feedgrain to come on the market. Moree-based AMPS agronomist Tony Lockrey said about 20-25 percent of the crop around his area had not been harvested and other areas still had more than 50pc left. He said some crops are likely to be abandoned.

“A lot of headers have exited stage left and gone down south, leaving growers working with their own headers at the moment,” Mr Lockrey said.

“There’s a lot of crops that are still under water so won’t get a header near them in the next three weeks. But most of the area is out of water and all that is hampering those areas is some storms.”

“Some growers may end up in the very unusual circumstance of being able to start harvesting their sorghum before the last of their barley, because it’s been good conditions for sorghum.

“With sorghum growing in those paddocks it’s drying it out, whereas the barley paddocks are staying wet because there’s nothing growing there.”

Mr Lockrey said storage was also slowing the harvest down, with washed out roads limiting access for trucks and grain accumulators struggling to find space for different segregations.

“Some chickpeas are getting knocked back on mould, splits or they’re shot and sprung so people are having to find storage space on farm,” he said.

“We had a truck driver yesterday take six hours driving and three hours waiting in line to get around floodwaters and unload – so that slows the harvest up too.

“There’s as much demand for bunker tarps as there are for headers at the moment.”

Toowoomba-based harvest contractor John Darby has been working at Spring Ridge on the Liverpool Plains after a short stint at Burren Junction. 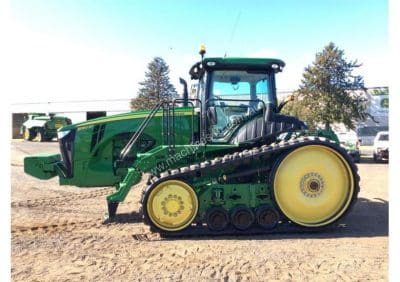 John Darby says there has been plenty of demand for tracked harvesters.

Mr Darby said plenty of headers in the area had been bogged in the past fortnight and there had been a lot of demand for his tracked harvester.

“We have some hilly country where the water has been running off and we have taken off 1,500 tonnes in the past three-or-four days,” he said.

“But there is a lot of flat country at Spring Ridge and I can only see us doing that with the tracked harvester. I can see us harvesting here until January, but I don’t know how long they’re going to keep delaying it because the quality of grain keeps going down.”

Mr Darby said he was unlikely to work south of the Liverpool Plains this year, but was considering heading north again.

“There’s still a lot of wheat around Coonamble and Walgett and I am not sure if they will be able to harvest it if it keeps raining,” he said.

“But if the work is still there and the conditions are right, we will consider heading to northern NSW again.”

“Basically, all good plans have been thrown out the window at this point,” Mr Gribbles said.

“We’re trying to do a bit of wheat this week, but there has been a bit of rain and it was really cold on the weekend – which has slowed us up. I fully expect us to be harvesting past Christmas here.”

While Northern NSW has had most of its canola harvested, Mr Gribbles said the situation in the Riverina was precarious.

“There’s still a little bit of canola to do here because the ground has been too wet, so we started on the wheat. Hopefully the canola is still alright,” he said.

“But a lot of harvesters have a big capacity these days, so when it does dry up it should be back on track reasonably quickly.”