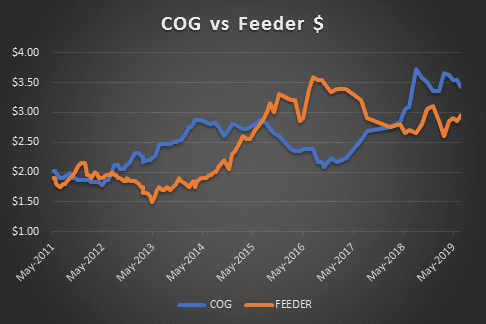 In our seventh monthly trading budget projection for 2019, our standard set of variables (see full list at base of page) based on a typical 450kg flatback feeder steer entering a Darling Downs feedlot today and closing-out after 105 days on feed in October, week four, has produced a negative $19 trading result.

That’s a further advance on an already-improved $32 loss around this time last month.

Apart from a brief spike in May last year, it’s the best outcome seen since a period of positive profit back in 2015. The big difference in May last year, however, was that feedlot rations were still worth only 410c/kg, and feeders were worth 265c/kg.

For this month’s budget, we’ve priced our typical flatback heavy feeder ex Downs at 295c/kg, up 10c/kg since mid-June, reflecting fewer eligible cattle coming forward, and the general saleyards trend in recent weeks. The last time feeder prices reached this level was in trading budgets calculated in November and December last year (305c and 310c/kg, respectively), but then it stopped raining. The recent surge in the Eastern Young Cattle Indicator reflects this movement, reaching 515c/kg on Friday – the highest point seen this year.

At their peak around June 2016, feeders in this report sequence topped at 360c/kg.

While it’s at least four weeks until the next June quarter feedlot activity statistics are reported by MLA/ALFA, there’s no evidence to suggest that numbers on feed have changed substantively since the March figures were reported at a new record industry high of 1.145 million head.

It would take a fairly profound seasonal break across eastern Australia to see any real shift in numbers on feed, and that’s looking increasingly unlikely as we pass mid-year.

While there has been some fluctuation in grain prices since our June trading budget report, we’ve lowered our representative finished ration price this month by $15/t to $460/t. Each feedlot’s grain position will have some bearing on that, however, in the current market.

There has been movement both up and down in grain prices over the past four weeks or so, but certainly most custom feed yards are still extremely full, and $460/t stands as a realistic mark for today’s budget. The sheer numbers on feed is heightening demand for feedgrains, and new season January-plus pricing is around $50/t lower than where it is today, as one trader said, “We’re not there yet. We have to trade through the next few months not really knowing what the winter crop is going to be. A lot of crops are probably six inches out of the ground and holding, but we’re still a long way from harvest. In the meantime we still have to work through this expensive grain.”

One the basis of the above figures, we’ve calculated feeding cost this month at $720/head ($744/head last month), and total production cost (feeder purchase plus feeding cost) at $2154, up $23.

Cost of gain in today’s calculation is marginally lower at 343c/kg (down 11c), based on our standard steer gaining at 2kg/day. This delivers a breakeven in today’s budget of 611c/kg (+7c on last month).

But for higher-performance feeder cattle (see this earlier story) gaining at 2.2kg/day, the breakeven drops to 592c/kg, and for absolute belters at 2.5kg/day, COG plummets to 566c/kg.

While some supply chain managers remain confident that grainfed steer prices will go above this figure in coming months, the sheer numbers on feed at present appears to be keeping a cap on higher grainfed price at present.

Historically, late October/November represents a market peak, and when combined with the fact that slaughter cattle supply is now starting to tighten, there’s more urgency evident from a number of market participants to get cattle tied-up for later in the year. That’s especially so given some of the margins being generated by grainfed processors at present.

Today’s figure of 605 is the highest forward contract price we’ve seen in this report since July 2016 – almost exactly three years ago, to the day. But the big difference back then, was that we were paying 360c/kg for feeders, and the ration price was just $320/t (breakeven then was 632c, representing a $96 loss).

With a forward contract slaughter price at 605c/kg in today’s report, a 611c/kg breakeven delivers a very modest $19 loss on the trading budget exercise for our ‘standard’ beast gaining at 2kg/day, while a heavier-gaining beast (2.2kg ADG), is about $48/head in profit, and the bolters at 2.5kg/day making a hefty $150/head.

As recently as our April breakeven calculation, the indicative margin loss on the standard beast was $83, and minus-$18 on the higher weightgain 2.2kg performer, showing how much progress has been made recently.

Today’s $19 loss on the standard beast is the best result seen since a short-lived $31 profit in May last year, but before then, the losses stretch back to early 2016.