THE rapid pace of change in instrument-based grading technology for both meat yield and eating quality assessment was on display at last week’s SmartBeef conference in Armidale.

“Technology in all these fields is moving very fast, and examples of various objective grading systems are out there being used in different parts of the world meat industry right now,” Teys Australia’s industry and corporate affairs manager John Langbridge told the Australian Lot Feeders Association’s annual gathering. 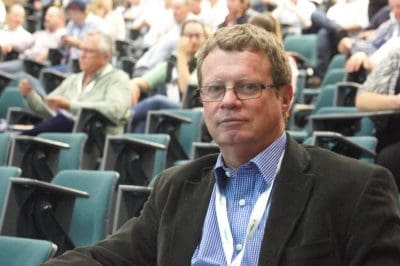 Mr Langbridge used a slide showing two carcases, same weight and fatness, producing dramatically different meat yield and overall value. “Those figures are probably five years old, so that value gap is inevitably much wider today than it was back then,” he said.

“At the moment the industry’s only way to gauge meat yield – based on hot standard carcase weight and P8 fat depth – is quite vague. The margin for error is enormous, and way too variable for cattle producers to make any realistic management decisions on,” he said. “Adding eye muscle area to the equation improves the degree of accuracy somewhat, but it still has a long way to go, particularly in terms of providing reliable data for management decisions.”

But the DEXA X-ray technology cut that margin for error right down, and results become very specific. Currently DEXA scanning is 88pc accurate, and likely to be well above 90pc by the time data starts to accumulate with the DEXA commercial work at Teys Lakes Creek plant in Rockhampton starting early next year.

Progress for the commercial trial of DEXA at the Teys plant is now well advanced – the scanning unit has arrived, with installation in the scanning room starting this week. Early next year, DEXA will be applied on every carcase passing through the Lakes Creek plant, totalling some 1600 bodies daily. At least 200 bodies will be boned out in forensic detail, to provide comparisons, and determine that DEXA is reading ‘true’.

The trial project will roll-out in three stages:

Associated with the DEXA work during the trial will be a brace of other parallel comparisons, including live animal scanning technologies for yield, and alternate camera-based grading technologies.

“The developments over the past 12 months, since MLA’s Richard Norton first announced the DEXA project last November, has been a catalyst for getting the industry thinking critically about what business model needs to develop to stay globally competitive,” Mr Langbridge told Beef Central.

“Objective measurements, whatever form they may end up taking – and feeding that back to farmers, with good information to help them improve their on-farm productivity, is going to be the key. And processors will need to reward those farmers who respond through price signals, because they are not going to react unless processors incentivise it.”

Under a Plant Initiated Project (PIP) supported by MLA donor company and government funds, the Lakes Creek commercial trial would also explore a range of instrument grading systems which focus on eating quality traits, as opposed to marbling.

Several systems from around the world are on their way to Australia for analysis, making assessments on marbling, rib-eye area, fat and meat colour and fat depth.

A second US-developed E+V camera system will also be assessed in coming weeks. The system is already in commercial use in the US, primarily for marbling grading. While it is not currently used commercially to grade meat and fat colour, researchers suggest it is capable of performing that function. 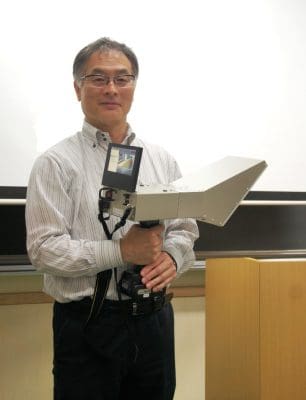 The Japanese camera has been designed primarily to grade highly-marbled Japanese Wagyu carcases, both for abundance, and fineness/coarseness of marbling. What’s yet to be determined is whether the same technology can be re-calibrated to suit more mainstream Australian grainfed and grassfed beef production, carrying much lower levels of marbling. While the Japanese Kuchida camera has been ‘demonstrated’, it has not yet been calibrated to Australian beef grading standards, however.

A recent three-day trial was conducted at Teys’ Wagga plant grading 2500 carcases, using both MSA graders and both Japanese and E+V cameras. Both were looking ‘quite promising,’ Mr Langbridge said.

Part of the latest exercise is to make sure that the US and Japanese cameras can essentially use algorithms that will give the MSA outputs (meat colour, fat colour and depth, rib-eye area, marbling). Australia uses the US marbling score already, so that point is considered covered in the US camera, as is fat depth. The issues under greatest scrutiny are around assessment of meat and fat colour.

Both the Japanese and US systems have the ability to capture individual eye muscle area images (an indicator of yield), as part of the reporting and feedback function.

Mr Langbridge said he believed within the next 12 months, enough information would be gained about both cameras (and potentially, others) to make decisions about applying to AusMeat for approval for measurement of various MSA outputs.

“We could well see them in use commercially inside two years,” he said.

Alternatives to DEXA for yield assessment

In other fields of instrument grading, technology company E+V has also developed camera-based meat yield assessment technology for beef and lamb carcases. The system is already in use in the European meat industry.

This system analyses a series of red visual ‘stripes’ projected onto the carcase to assess depth and shape. The software behind the equipment has been trained against other scanned carcases, where detailed bone-outs have been performed, to strengthen its predictive capability.

The E+V yield camera will be compared for carcase yield predictive capacity against the DEXA X-ray system’s performance during the upcoming commercial trial of DEXA at Teys’ Lakes Creek plant in early 2018. Early yield prediction accuracies are expected to be low, but like DEXA, should improve over time as the equipment is calibrated for Australian conditions.

“While we are spending all that money, it make sense to examine some of the other technologies at the same time. They may not match DEXA’s high degree of accuracy, but the industry owes it to itself to test them, because their performance may well be plenty accurate enough to consider for commercial use.”

One of the key differences in any comparison between the DEXA X-ray yield assessment system and alternatives such as E+V’s camera-based system is that unlike DEXA, the E+V camera cannot be used to instruct robots on optimum cutting lines, but simply provides an accurate predication on meat yield.

That may not necessarily be a bad thing, because there will be a ‘certain number’ of AusMeat beef plants in Australia which because of their smaller size, will have no interest in installing robots in the fabrication area in future. For them, simply providing accurate yield assessment for feedback and possible future value-based payment will be enough.

Another considerable factor in the installation of DEXA is cost. Beef Central understands the current installation at the Teys Rockhampton plant will leave little change out of $3 million. Part of that is being spent on providing elaborate shrouding to protect nearby staff from X-ray exposure, and there is also considerable cost involved in re-configuring the available space to house the installation  – always tight, in any meatworks environment.

All this suggests that ultimately, while DEXA is apparently the industry’s ‘preferred current option’ for yield assessment, a much cheaper, simpler and less intrusive yield assessment technology may be adopted by smaller processors keen to move down the value-based marketing path.

One school of thought that’s emerging is that if different yield assessment technologies are adopted, the feedback to producers (and potentially value-based payments) will carry a ‘degree of accuracy’ statement. DEXA assessment might ultimately be above 90pc for yield accuracy, with further refinement, while the E+V camera system might be 70pc, for example.

“Either way, it will be light years ahead of the current EMA+ carcase weight+fat cover formula, which is only 20pc accurate for yield,” one stakeholder said.

So are there even more camera based systems out there for yield and quality analysis of carcases?

Stakeholders often ask what happened to Australia’s incredibly forward-thinking VIAscan video-image analysis project, developed through AusMeat in the 1990s-2000s. Now under the ownership of Cedar Creek, a ‘descendent’ of VIAscan continues to be used in commercial grading applications on lamb carcases overseas. One of the largest users is New Zealand’s Alliance group, one of the country’s largest lamb processors.

VIAscan uses a colour video camera to captures images of each carcase and via a computer system, accurate colour and dimensional measurements are taken of each carcase and related to important production traits, Cedar Creek says. These measurements provide a timely prediction of yield down to a primal basis and a range of carcase quality characteristics.

Yet another 3D-imaging camera-based carcase assessment system has been developed in the US, and will be scrutinised in upcoming Teys trials.

These emerging systems are not without their problems, however. The US Agricultural Marketing Service, the USDA body responsible for carcase grading, recently wrote to stakeholders about concerns over inaccuracy in instrument grading technologies being adopted for meat quality assessment in the US beef industry.

Concerns arose after new camera technology called Gigabyte Ethernet was adopted in nine US plants that was later determined by USDA graders to be not working properly – effectively, ‘over-grading’ on marbling, delivering higher than warranted payment premiums to producers.

Processors and lotfeeders became suspicious of the system when cattle were producing dramatically higher percentages of USDA Choice and Prime quality grades than previous averages. USDA said it planned to re-program the cameras.

On the flipside, USDA graders have been vigorous in their criticism of such systems, driven obviously in part, by job-protection. There are more than 7000 meat-graders employed by USDA.

One of the research project summaries delivered by university students during the SmartBeef conference focussed on a comparison of accuracy in marbling assessment between manual MSA graders and one of the emerging camera-based instrument grading systems.

The study on a line of Angus, Hereford and Wagyu cross carcases found that MSA graders on average explained 28 percent of the variation in intramuscular chemical lean fat present in the carcases, while the Japan Meat Imaging camera explained 38pc of the variance.