THE conflicting interests of different primary industry sectors in the ‘food or fuel’ debate over subsidised ethanol production were highlighted this week, following the Queensland Government’s introduction of its Liquid Fuel Supply (Ethanol and Other Biofuels Mandate) Amendment Bill 2015 into State Parliament last Tuesday. 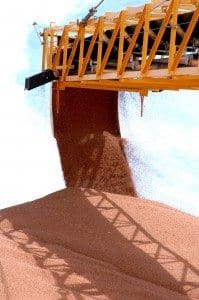 AgForce Queensland, which represents the interests of both grains and beef producers as a State Farm Organisation, issued a statement applauding the decision, while the Australian Lot Feeders Association, representing feedgrain-dependent feedlot operators, was diametrically opposed.

In practical terms, the bill will require that 20 percent of all Regular Unleaded Petrol (RUP) sold in Queensland to be blended with ethanol.

AgForce Grains on Friday congratulated Queensland’s Palaszczuk Government on its introduction of the Bill, with vice-president Arthur Gearon saying it was an initiative that AgForce Grains had been calling for over a number of years under successive governments.

“The proposed mandate will require fuel sellers to meet targets for the sale of ethanol-blended petrol and bio-based diesel,” Mr Gearon said.

“Targets will help to provide surety for the grain industry, as it will provide a good, all year round consumer of Queensland grain. A domestic renewable biofuel industry will bring more diversity and security to the supply of fuel in addition to providing a reliable alternate market for grain grown by Queensland producers,” he said.

While AgForce Grains welcomed the introduction of a two percent mandate, its members wanted to ensure the mandated level increases as the market demand grows, Mr Gearon said.

“We want to work with the Queensland Government to see increases in the mandated level tied into legislation, providing further assurances of market growth and supply.”

AgForce Grains cited a ‘wide range of other benefits’ including:

Mr Gearon said AgForce Grains looked forward to the parliamentary inquiry that will be undertaken following the release of the Bill, and to further working with the Queensland government to build this industry in Queensland.

In sharp contrast, the Australian Lot Feeders Association said the legislation was ‘poor Government policy’ with numerous reasons offered why it should not proceed.

President Don Mackay said it was timely to remind Queenslanders of a few telling facts regarding the issue.

No Regulatory Impact Statement outlining that the legislation has a net benefit to the state has been completed, he said.

“This is because a cost benefit analysis would undoubtedly have determined that the policy has no net benefit, as has been found in NSW, Victoria, WA and by the Federal Government,” Mr Mackay said.

Ethanol mandates lead to increased food prices for consumers, given 57pc of the state’s ethanol is produced from grain. With the mandate forcing grain and molasses towards fuel, not food production, it would artificially drive up beef, dairy, chicken, pork and egg prices, as grain is, on average, the highest cost of production.

Other points raised by ALFA in its opposition to the Bill included:

ALFA president Don Mackay said with the above statements ‘being irrefutable’, it would be interesting to see what the Queensland Government said in its communication program aimed at dispelling the so called ‘myths’ surrounding ethanol.

“While the bill allows the mandate to be suspended if there is a shortage of ethanol (for instance during a drought), the damage by way of artificially higher grain and molasses prices to livestock producers will already have been done,” he said.

“No industry should have a Government-imposed demand for its product, particularly when consumers don’t want it, mandates increase food and fuel prices and the policy costs will likely outweigh any purported benefit.”

“The Qld ethanol mandate will provide benefits to only two ethanol producers in the state, yet will negatively impact on millions of food and fuel purchasing consumers, engine-owners, livestock producers, fuel wholesalers/retailers and tax payers,” Mr  Mackay said.

“It therefore should not proceed,” he said.

Further information on the Bill can be found here.