High-tech feed bins are being used to identify the most feed efficient genetics in the Wagyu industry. 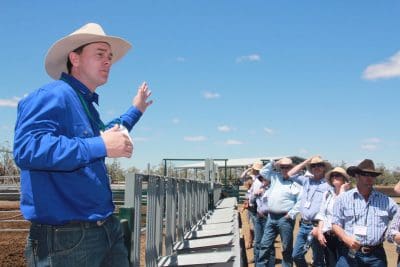 In a breed where cattle typically spend more than a year in a feedlot, genetics capable of producing heavier carcases and higher marbling with less feed are extremely valuable and worth identifying.

Feed conversion efficiency can vary by up to 15 percent between animals.

For Wagyu being fed for hundreds of days, small improvements in feed efficiency can mean hundreds of dollars saved per animal in feed and production costs.

However, the challenge to identify superior genetic converters has been stifled in the past by an inability to accurately measure, on a commercial scale, the amount of feed each individual animal eats during a feeding program.

Lot feeders have had to work on the average feed intake across a mob to assess feed conversion efficiency.

However, individual animal feed intake data is now available and on the way to revolutionising how Wagyu genetics are assessed, thanks to the recent installation of Canadian-developed GrowSafe feed conversion measurement bins in two pens at Stockyard’s Kerwee Feedlot near Jondaryan (pictured below right). 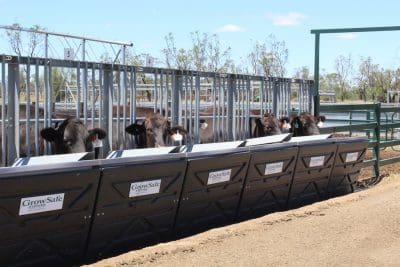 The high-tech bins are mounted on electronic weigh-cells that take 1000 readings every 3 seconds.

They use RFID-ear tag readers to record when each individual animal is eating and the amount of feed each animal consumes.

For the past three months the technology has been used for a ground-breaking sire progeny test conducted by Kerwee for the Australian Wagyu Association, involving 180 steers from Darren Hamblin’s Wagyu herd at Middlemount in Central Queensland.

The 180 steers are the validated progeny of nine high-indexing sires used in Mr Hamblin’s Strathdale Wagyu operation, and are all bred from a common cow herd.

Mr Hamblin keeps extensive data to track the performance of progeny of every bull he uses on key commercial parameters such as average daily gain and carcase quality traits.

He was very keen to pioneer the Growsafe technology, to fill in a missing part of the financial puzzle.

“We could have sires that are equal for growth and carcase traits, but we have not been able to identify which one converts feed to weight more efficiently,” he explained.

It is not just about identifying genetics that eat the least. Some cattle may eat less feed, but will not grow or marble significantly either.

Before this trial, Mr Hamblin said he knew the influence that individual bulls in his herd were having on average carcase weight and average marbling score.

“But I now know information about their performance as far as their conversion goes, and that is what I didn’t know before,” he told a field day explaining the trial at Jondaryan this week.

$900 difference in carcase value between sires

His 180 steers were fed for 90 days from August 4 until early November. The trial showed a $900 difference in average carcase value from the progeny of the nine bulls tested.

“Not only does the lower conversion figure mean it is less dollars of feed consumed, if he eats a bit less to put on carcase weight you also get a double whammy in the value of your carcase.

“The dollars of feeding are going down at the same time that your carcase value is going up, so that is why this is so important to me.”

Hefty price premiums for Wagyu cattle in recent years have triggered a significant growth phase for the breed, both through existing breeders expanding herds and newcomers being attracted to the industry.

In fact Wagyu  numbers in Australia are growing at a faster rate than any other breed, according to the Australian Registered Cattle Breeders’ Association, with 8643 new calves registered in 2015.

The level of interest from new breeders was highlighted by the fully subscribed attendance of 160 people at Monday’s Australian Wagyu Association field day at Kerwee Feedlot.

With larger numbers of Wagyu feeder stock set to become available in coming years, producers at Monday’s field day were advised to develop supply relationships rather than to simply sell to the highest bidder.

Kerwee Feedlot general manager Steve Martin said that with the exponential growth occurring in Wagyu production, buyers would soon be offered up more Wagyu cattle than they had been offered before.

Producers who developed supply relationships and used feedback to meet customer requirements would be best positioned to benefit as Wagyu numbers grew.

“What that growth gives me (as a buyer) is choice, and what I would like to do is to make sure I spend every one of my dollars on stock that are going to do the job,” he said.

“In terms of securing our supply we need to establish quality control.

“At the moment (because of high prices) a lot of people are sacrificing a supply relationship at the expense of price.

Store sellers should be carcase-focused

CQ producer Darren Hamblin said producers who are selling cattle as stores may not care much about carcase quality.

But he said that as an industry it was in every producer’s interest to focus on improving their production quality.

“Because if we don’t raise the value of our product, the Australian brand will cop a hit.

“People will start eating Wagyu that is not good, and we’re all going to feel the pain.”

He said that with more metrics such as feed conversion efficiency data becoming available, buyers will have a much clearer idea of which genetics produce the best commercial outcomes.

Breeders producing the best performing stock will continue to be rewarded when the market is well supplied and buyers have a choice.

“We have the technology to help us understand what we trying to achieve and I think we would be foolish not to use it.” 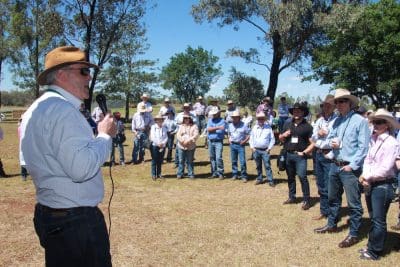 “This breed puts an enormous amount of money down the throats of these cattle, so feed efficiency is absolutely critical for profitability,” Mr Truscott said.

High-ranking Wagyu bulls were in demand, and the early-adopters of the new testing procedure to identify superior sires would be the ones to benefit.