PROFITABILITY has returned in Beef Central’s latest regular 100-day grainfed trading budget calculated this morning, which has produced a +$21 positive trade on cattle entering the feedlot today, and closing out after 105 days in late December. 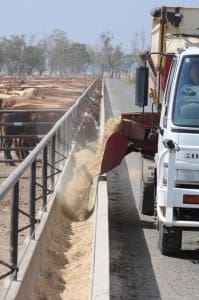 The big turnaround, from a $20 loss reported in our previous breakeven calculated on August 27, is driven by a surging forward grainfed slaughter cattle price, as well as an easing trend in ration pricing.

When combined, those two variables have overcome the ‘downside’ factor of ever-higher feeder steer purchase prices.

Our report is based on our standard set of variables (see full list at base of page) using a typical 450kg liveweight flatback feeder steer going on feed in a Darling Downs feedlot today, and closing-out after 105 days for slaughter on December 30.

The timing of closeout and slaughter at December 30, effectively means an early January kill. Fewer grainfed plants will be in operation at that time, which is reflected in fewer 100-day cattle being placed by lotfeeders in the past few days.

For today’s budget, we’ve lifted our feeder steer purchase price another 15c/kg, reaching 315c/kg, after hitting 300c for the first time in history back on August 27.

The reflects the widespread shortage of heavy feeders fitting our spec right across eastern Australia after two exceptionally dry years;  the traditional market price peak in the south heading into spring; and perhaps the competitive tension in the market over that “heavy feeder/light slaughter” beast between lotfeeders and processors, which is keeping all players honest. The processor competition for cattle fitting this spec is not surprising, with grassfed trade steer on this week’s SEQ grids (230kg dead) making anywhere from 530-545c/kg.

There’s evidence of business being done by lotfeeder on heavier feeders this week anywhere from 300c to as high as 325c this week, with central and southern NSW probably still 10c/kg above rates seen in southern Queensland.

Today’s feeder purchase values our feeder steer at a record $1417, another huge $67/head jump on our previous budget forecast. This time last year, our feeder was worth just 210c/kg ($945), representing an increase of 105c/kg ($572) on the feeder steer investment since then.

At their lowest-ever point in the four years of data captured in Beef Central’s breakeven reports (May 2013), feeders were worth just $670, representing a massive rise of $747 a head since then.

Depending on which programs such cattle are being directed into, there are Queensland feeders carrying some indicus content (greater than Santas or softer Droughtmasters) being traded at cheaper rates, perhaps less 10-15c/kg.

That may be helping some yards with their average feeder buy price, in the absence of more desirable spec cattle.

Another trend is some lotfeeders placing slightly lighter cattle, in the absence of any volume of heavy feeders in the market. Lowering the bottom end of the weight spec is made a little easier when grain (and hence ration) prices are in decline – now $20/t below their earlier record highs.

At a cost of gain in today’s budget of 272c/kg, compared with a beast that is worth 315c/kg liveweight, it looks increasingly likely that younger/lighter cattle (more feed-efficient, at least in theory) will find their way into 100-day programs. It’s been suggested that some lotfeeders might drop their weight tolerances from around 380kg, back to 350kg, as a result.

While currently the imperative is more just ‘bums on seats’, that lighter intake weight strategy is traditionally more likely to apply on certain types, such as those carrying some Euro content, which can be fed-on a little more successfully.

For today’s budget, we’ve eased the ration price by another $10/t to $365/t, in response to recent grain price movements and seasonal conditions in growing areas. Once new-season grain starts to flow onto the market in November/December, it’s widely anticipated that ration prices will drop further.

Another factor is that some yards will have bought some dearer grain in recent months, that they are still working through the system, and which is reflected in ration pricing.

The fact that Queensland and northern NSW feedlots remain near capacity is helping protect current custom feeding ration pricing levels, however, despite the drop in feedgrain price. That’s because there is still little competitive pressure on custom-feedlot operators to lower their margins in order to attract customers. That may change a little if pens start to empty out in coming months.

As a result, there is currently a range of ration prices evident in the custom-feeding market, anywhere from $360 to $390/t, depending on likely performance. Happy days, if you are a custom feedlot owner with a full stock inventory.

All this adds up to an almost unbelievable total production cost of $2095, up another $46 on last time. To put it into context, back in May last year, that TPC figure was $1232 – an $863 rise in production cost in the 16 months since.

Combining the above inputs, it delivers a breakeven in today’s budget of a record 594c/kg – up another 13c/kg on a month ago, and 140c/kg higher than this time last year. Is a 600c/kg breakeven figure on the horizon? That looked implausible only three or four months ago, but it is now absolutely on the cards for the first time.

In spite of the big headwinds caused by record feeder prices, we have today’s SEQ kill forward price for our finished 100-day grainfed steer, exiting the feedlot December 30, at a record 600c/kg, up yet another 25c/kg on three weeks ago.  It values our 356kg dressed weight carcase at $2136.

That price reflects the fact that good slaughter cattle are likely to be very difficult to find by December-January, given the events of the past 18 months.

It also sends a clear signal to stakeholders and supply chain managers that grainfed processors across eastern Australia are desperate to see cattle continuing to be place on feed in coming months, and the best way to do that is through money.

Lining-up today’s breakeven figure at 594c/kg, and today’s processor forward purchase price for December of 600c/kg, it means today’s trading budget comes back at a trading budget profit of $21.36 a head, based on our regular variables. That’s a $41 improvement on three weeks ago, and a rare positive trade in Beef Central’s data-set stretching back four and a half years.

Looking back at our breakeven calculations over the past 12 months, the average trading loss in Australia has been $30 a head, using our standard variables. Within that, results have gone from a few dollars profit to a -$74 loss.

Today’s spot market for 100-day cattle for SEQ slaughter is in a range from about 560c to 570c/kg for better cattle on public grids, so we have split the difference for today’s quote. It’s a dramatic rise in the past three months in line with the broader cattle market spike and kill numbers in decline.

In comparison, cattle forward-bought by processors back in June, for close-out this week, were bought on contracts worth 540c/kg. It means processors buying cattle today in the spot market are probably 25c/kg ($89) on average better off on those forward-bought cattle, than they would be on the same animal bought in today’s spot market.