Yesterday’s September quarterly feedlot survey results have provided some fodder to support the view that there’s an important trend occurring in lotfeeding operations across eastern Australia this year.

Survey data appears to back-up the belief that the rate of cattle turnover (as distinct from the numbers on feed) in feedyards across Australia has declined significantly over the past 12 months.

To try to illustrate this, we have used the past four quarterly industry surveys, and divided the figure for numbers of cattle on feed by the quarterly turnoff of grainfed cattle.

As crude a formula as this may be, it shows a distinct and substantial downwards trend over the past year. The September quarter figure released yesterday shows a ratio (COF/turnoff) of 1.177. For the June quarter, the figure rose to 1.278, and the March quarter was higher still, at 1.448. For much of last year, the figure sat in a range from 1.3-1.4.

We asked around the grainfed industry, and were offered four main likely reasons for the trend in lower turnover in Australian feedlots:

As Beef Central’s regular 100-day grainfed trading budget has illustrated, cost of gain (the cost of putting weight onto a beast on a feedlot ration) is currently considerably less than the purchase cost of the beast itself on a c/kg basis.

Cost of gain in our regular 100-day trading budget has fallen from a record high around 280c in May last year to just 213c/kg last month, especially with the arrival of cheaper new-season grain. That trend is illustrated in this graph, plotting COG versus feeder steer purchase price, on a liveweight basis: 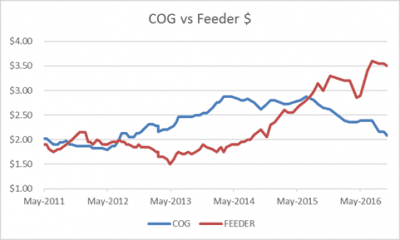 With feedlots frequently being outbid by grass restockers for cattle in an over-heated store market this year, that’s driven a trend among lotfeeders towards feeding younger, often lighter cattle for longer periods, to maximise the lotfeeder’s cost-of-gain advantage.

“And they don’t necessarily have to be lighter cattle at entry to do so,” he said.

“Often times they are normal export feeder weight cattle, just being pushed on to heavier weights. There’s more of that being done, and it will continue, because that COG is cheaper than the purchase cost of the cattle.”

Mr Shearer Smith said there was a threshold, however – an ‘efficiency point’ somewhere around 120-130 days, beyond which many cattle started to lose feed efficiency and run the risk of excess fat cover and weight in grid penalties.

In the case of Grassdale, average days on feed have expanded by about 12pc recently, he said.

“I’d say that cattle now are easily being fed for 10pc longer, on average, that they were 18 months or two years ago in many Queensland yards,” Mr Mort said. “That can very easily reduce a typical yard’s turnover by 10pc.”

2: Shift from domestic to export grainfeeding

In Queensland – the largest lotfeeding state – at least, there’s evidence of a shift in emphasis from domestic 70-day trade cattle to export weights +100 days.

Again, that appears to be partly driven by producers either holding those young cattle to finish themselves as grassfed trade steers, with the abundance of grass that’s about, or finding grass-finishers who are prepared to pay more for young cattle than lotfeeders.

Mort & Co’s Grassdale yard was feeding a lot of domestic trade cattle only 18 months ago, but has virtually none on feed today.

Further evidence of the shift from domestic to export grainfed cattle can be found in recent grainfed beef export statistics released by MLA. The figures show a decline of just three percent, year-on-year for the September quarter, to 65,000t.

That’s surprising, given that grainfed numbers on feed reported yesterday for September quarter were back 13pc, and total grainfed cattle turnoff was back 6pc on the previous quarter. The explanation provided both by MLA and a leading lotfeeder was that that probably represented some shift from domestic weights to export weights in grainfed cattle over the past four or five months, effectively ‘propping-up’ the export beef volume.

The growth in momentum in the Wagyu industry is clearly impacting on turnover in those feedlots that put pens aside for Wagyu longfeeding – anywhere from 350 to 500 days. The topic was discussed in some detail in Beef Central’s earlier Top 25 Lotfeeders report  https://www.beefcentral.com/features/top-25/lot-feeders/top-25-lotfeeders-trends-the-big-get-bigger/

With very large Wagyu feeder numbers anticipated to hit the market in the next couple of years, turnover in feedlots feeding Wagyu cattle is only likely to worsen, some stakeholders believe.

While five or ten years ago, a lot more there was a lot more mid-fed programs being used (150-180 days) among Angus cattle, Smithfield’s Jason Shearer Smith said.

Much of that was happening among the bigger company-owned yards like JBS, Nippon and Stockyard, under program business with large export customers. But much of that business had gradually been wound-back in recent years, due to less demand for that marbling score 2-3 type Angus product.

“But I believe with new markets emerging like China, which wants marbling at the higher end of the trade, there’s been more of a trend again recently back to mid-feeding around 150 days,” Mr Shearer Smith said.

That was also contributing to slower rates of grainfed turnover.

Meat & Livestock Australia senior analyst Ben Thomas said he thought all four factors were likely to have contributed to feedlot turnover decline, to some extent.

“It’s often hard to pinpoint down to just one key factor, but all these sound plausible,” Mr Thomas said.