OUTCOMES have improved in Beef Central’s latest 100-day grainfed trading budget calculated this morning, but results are still well into the red.

The forecast result of minus-$75 on the trade, is based on our typical feeder steer going on feed today and closing out after 105 days in February next year. While bad enough, it is still a considerably better figure than back-to-back record losses of $114 forecast in our two previous budgets in August and September.

In fact trading losses since September last year have averaged well above $95 a head.

This morning’s result is built around our standard set of variables (accessible at the base of this page) based on a 450kg flatback feeder steer entering a typical Downs feedlot today, and closing-out for slaughter after 105 days on February 1, 2017.

There’s been some movement in several variables which has improved the result somewhat in today’s calculation. Here’s a summary.

Feeder steer pricing applied in today’s report eases 5c/kg to 350c, but while that’s drifted a little recently, it’s perhaps not as much as some might have expected. Today’s nominated feeder figure – still just 10c shy of our all-time record – values our typical 450kg flatback feeder at $1575, $22 lower than our previous report in late September.

Evidently there’s still a fair backlog of feedlots looking to secure heavy feeders, despite evidence of an overall decline in numbers on feed across eastern Australia.

Lack of supply of those suitable heavy feeders continues to prop up the market, but it’s reasonable to expect that there will now be more eligible cattle moving into the market, as the oats season starts to wind-down through southern Queensland and NSW, contacts suggest.

A quantity of feeder cattle currently being presented appear to have fair condition on them, on the back of a mild and very wet late-winter/spring period which has pushed cattle forward. That, in turn, may have a detrimental effect in some feedlot performance in coming months. But that’s unlikely to be reflected in price penalties for feeders, in the current environment.

Of interest at present is the contrast in strategies between feedlots producing 100-day cattle, in terms of weights in feeders.

Some are tending to stick with more traditional heavy feeders, +380kg liveweight, while others are continuing to accept much lighter cattle, in the mid to low 300s. It appears many feedyards, particularly larger ones, are not prepared to be more dynamic in adjusting programs to suit the circumstances.

It certainly appears that there are some considerable incentives in inducting lighter than usual feeder cattle at present. But go too low, and lotfeeders start butting heads with backgrounders and restockers who continue to drive a red hot-market for light cattle. That trend was captured in this graph in MLA’s latest September quarterly projections update: 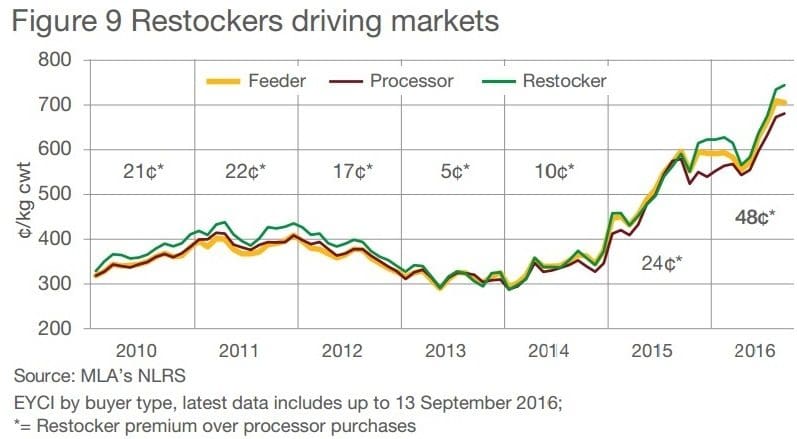 An important consideration at present is cost of gain, which we calculate for the purposes of this morning’s report at 213c/kg.

We’ve prepare the graph, published here, plotting COG against our feeder steer purchase price, all the way back to May 2011 when Beef Central started this regular summary. 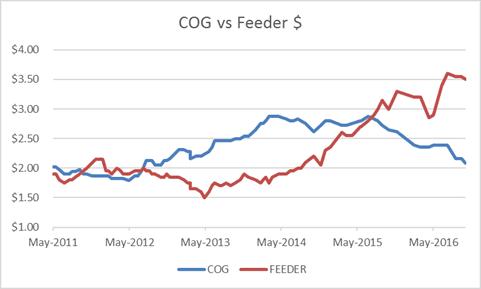 It shows a number of important points:

A spread as wide as it currently is has substantial implications for feedlot operators, unless feeder prices again start to decline, bringing the two back into closer alignment.

Some further historical observations from the graph:

Getting back to today’s trading budget summary, on the strength of recent grain price movements, with a very big crop in front of many growers, we have lowered ration price in today’s budget by $10/t to $280/t.

That’s back $40/t on early August figures, and is the lowest ration cost we have seen since early 2013. In July last year, ration price was $385/t, representing a falloff of more than $100/t in the 15 months since then.

In October last year, feeders were worth 300c, and ration price was $355/t, delivering a total feeding cost over 105 days of $556. The feeding cost difference between then and now is $117, which is represents 26c/kg, based on a 450kg feeder entry price.

The variables described above deliver a breakeven figure in today’s budget of exactly 600c/kg – a drop of 12c since last time, and back 32c from our record-high breakeven recorded three months ago, when feed costs were still based on old-season grain.

Grainfed forward price grids from large grainfed processors this week for delivery in February next year, are currently around 580c/kg – more or less where they sat for our previous report in September, although there is currently some variance in offers.

That means that today’s trading budget delivers a loss on our current proposition of about $75 a head. All that can be said is that that is better than a loss of $114, as it was in our previous two trading budget calculations.

Looking at 100-day grainfed cattle heading for slaughter this week, forward contracts written on those cattle back in July were priced around 580c/kg.

There’s been a sharp drop in some spot grid offers on 100-day cattle for southeast Queensland slaughter over the past four days. Some quotes yesterday were as low as 565c, down 20c on ten days ago. Other offers are in a range from 570-600c/kg.

What that means is that lotfeeders who elected to roll-the-dice and take today’s spot money, as opposed to forward-selling those 100-day cattle back in July, have come out around line-ball on the decision.

In other ‘grainfed’ forward contracts, it’s worth noting that Coles contractors this week are still on 670c/kg, and Woolworths suppliers perhaps 10c/kg less than that, given the HGP difference.

But weakening signs in the Eastern Young Cattle Indicator over the past week, particularly in the south, would suggest those domestic forward contract rates might now start to trend down, also.

We continue to see the inverse relationship between restocker/feeder cattle and slaughter cattle, as evidenced in the MLA table published above, suggesting there could be a continued, gradual correction in the feeder market to bring the two back into alignment. That’s particularly so because feedlots have had a very, very difficult trading period over the past few months, suggesting at some point, commercial sense has to come into play.