CATTLE numbers on feed across Australia have hit a record high according to the December quarterly feedlot industry survey released this morning.

Last year’s drought conditions across eastern Australia saw many larger commercial feedlots pushed to their operating capacity, while many smaller opportunity yards less than 1000 head capacity were re-activated and operating at previously unseen levels. Feedlot utilisation levels reached 90pc in the December quarter – considered to be close to effective operating capacity, when pen maintenance, cleaning and repairs are taken into account. 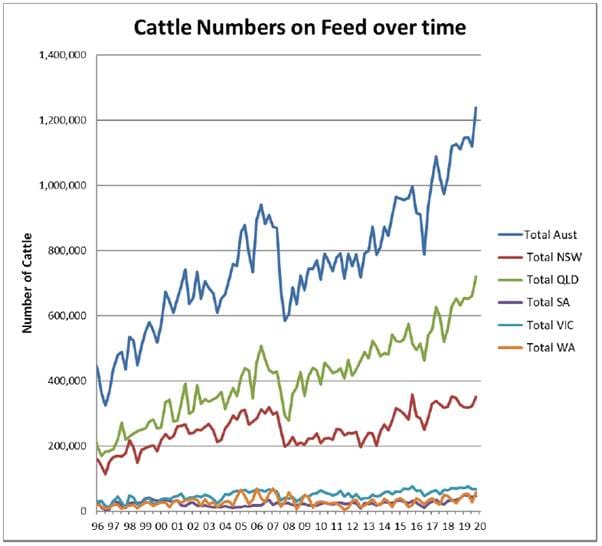 The quarterly survey conducted by the latest Australian Lot Feeders Association and Meat & Livestock Australia showed increased numbers on feed in all states, with Queensland (up 60,000 head on the previous quarter), NSW (up 28,000 head) and Western Australia (up 29,000 head) showing the largest gains.

South Australia and Victoria experienced more modest increases, with South Australia increasing by 3779 head or 8.9pc to 46,367 head, while Victoria increased marginally to 67,255 head on feed.

“Cattle on feed numbers have been above one million head during the past eight quarters, culminating with a historical all-time high exceeding 1.2 million at the end of 2019,” Mr Camm said.

“The feedlot industry continues to demonstrate the significant role it plays in helping supply chain business continuity in the face of persistent and widespread drought conditions,” he said.

Australian grainfed exports totalled 82,520 tonnes through the December quarter, an increase of 5pc from year-ago levels and 2pc higher than volumes in the September quarter, he said.

Within this, grainfed exports to China continued to climb, improving 61pc year-on-year to 23,989t, up 20 from the previous quarter.

However, exports to Japan eased 10pc from the same quarter last year to 33,565t, while grainfed exports to Korea fell 2pc year-on-year to 14,168t. 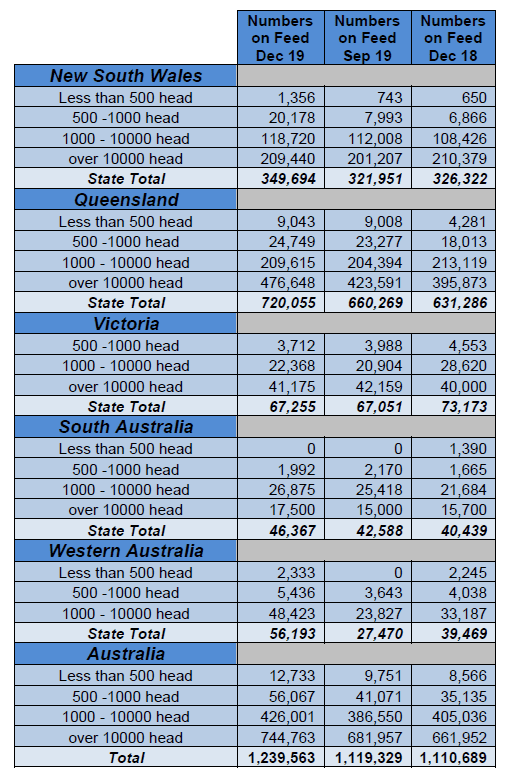