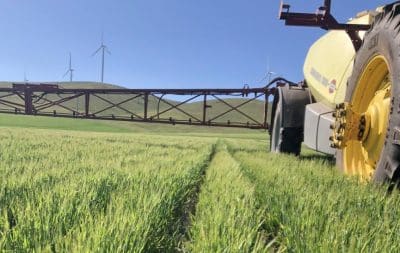 This crop of Spartacus barley at Barunga Gap in South Australia’s Mid North is on track for November harvest. Photo: Tom Michael

DEMAND in southern markets for new-crop export business has closed the inverse on barley and narrowed it for wheat, while in the north, new-crop values have firmed on limited selling.

Nearby wheat markets have softened as consumers limit their buying ahead of expected price pressure likely to hit the market by October when the New South Wales harvest gets going in earnest.

The most aggressive grower selling into nearby slots is coming from southern NSW, where stocks retained or bought for supplementary feeding of livestock are now surplus to requirements amid mostly excellent pasture conditions.

A few early crops of barley on the Western Downs of Queensland and in far northern NSW are now being harvested, and the wheat harvest is about to kick off in central Queensland, with tonnage from both expected to disappear quietly into local markets.

Trade sources report bulk new-crop wheat sales have been booked to China, Indonesia, The Philippines and Vietnam, and new-crop barley is pricing into the Middle East and Thailand.

Consumers in Victoria and southern NSW are buying small amounts of nearby barley, but appear to be waiting for prices to drop a few dollars to advance new-crop buying.

“New-crop has been pretty quiet for the consumers.”

Southern growers appear to be in no rush to sell new-crop barley, and are likely to sell their canola and milling wheat at harvest and store their barley if bids for it fail to firm.

“August rain has been fantastic for crops in the eastern states.

“It’s put us in the box seat in terms of production.

“The current-crop market is coming back, and growers are letting go at these levels.

“In new-crop, we’re finding a little bit of demand…from export and domestic buyers, and there’s enough happening to soak up what the grower is wanting to let go of.”

Small-to-medium feedlots are going into the harvest slot with more grain stored or pre-bought than was expected a couple of months ago.

They are responding to excellent grazing conditions from the Queensland-NSW border through to south-eastern South Australia, which has throttled the number of cattle coming into yards as restockers buy up big.

“I’d say the feedlots would be down 50 per cent on their capacity because cattle are just so expensive,” one trader said.

“In the nearby market, feedlots are buying 100 tonnes here and 500t there, but really, they’re waiting for cattle to get cheaper and for beef prices to get higher.”

This does not appear likely to happen any time soon.

“The feedback we’re getting is that all processors want to drop their grid prices, and cattle booked into meatworks are being pushed back.”

New-crop barley will start to flow into Downs feedlots in reasonable volume by mid-September, weather permitting, and most feedlots are expected to stick with barley until harvest pressure narrows the spread between barley and wheat to less than $40/t.

“There’ll be plenty of barley around once harvest gets going to take us into next year.”

Carpendale Commodities Andrew Jurgs said new-crop values for wheat and barley had steadied in the Downs market, where the inverse was collapsing.

“The market is in an interesting position as we look for growers to start harvesting, and consumers onshore and offshore to start buying more.”

“Growers in north-west and central-west NSW were chirpy sellers through June-July, but the lower prices they’ve seen in August have slowed selling down.”

In southern NSW, the inverse between current-crop and new-crop barley has shrunk to about $25/t, and will get smaller as harvest approaches.

“It’s difficult to find homes for old-crop stocks where growers bought grain for feeding and now don’t need it.”

Basis, or the premium of Australian grain over Chicago wheat futures, is at an historically low level of around $5/t at the NSW bulk export points of Newcastle and Port Kembla, compared with close to $200/t at the height of the domestic drought market in 2018.

China is said to be buying Ukrainian barley for shipment over coming months at a premium to Australian barley, which is looking all the more attractive into other destinations by comparison.