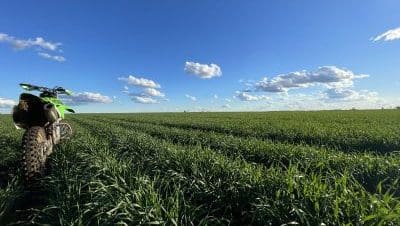 WIDESPREAD rain across much of the Australian grainbelt and softer offshore markets have seen feedgrain prices weaken in the past week.

However, continued demand from export coupled with steady buying from domestic consumers has provided support.

The nearby spread between wheat and barley in southern Queensland has narrowed further this week to around $15 per tonne, compared with more than $40/t in southern markets.

Trade sources across eastern Australia say trucks have become easier to get in the past week, following months of painfully tight logistics.

Some big falls of rain have been seen across southern Australia this week, particularly in Western Australia, where some localised flooding has been seen in the Great Southern region which encompasses CBH Group’s Albany Port Zone.

Most gauges in the WA grainbelt recorded more than 10 millimetres, and many including Northampton on 29mm, Mingenew on 38mm, Hyden on 38mm, Jerramungup on 42mm and Goomalling on 26mm got more than 25mm.

South Australia had handy falls of mostly 10-30mm, with the Murray-Mallee again getting mostly single-digit registrations.

Victoria had mostly 5-20mm with the Mallee once again missing the bigger falls, while some of southern and south-central New South Wales get a welcome soaking.

Highest registrations included Ardlethan with 69mm, Griffith with 47mm, Hillston with 50mm, and Temora with 46mm.

At Young in NSW, Grain Focus broker Michael Jones said the falls have been welcome.

“The western Riverina had good rain, and they needed it.

“It will get them a long way into the season.”

However, their grain selling is being mostly tied to picking up backloads of urea.

“The ports are still driving the market,” Mr Jones said.

“Trucks seem to be a bit easier to get in the past week or two, with urea coming back when grain goes down.”

Mr Jones said up-country end users were booking small parcels of grain for their July-August demand, and facing competition from accumulators of feed wheat and barley.

He said the softer Australian dollar appeared to be helping Australian feedgrain to maintain its export competitiveness against approaching new-crop Black Sea shipments.

Mr Jones said while export values may have eased a little, delivered markets were flat, and supply-side pressure from the grower was not expected.

“Some growers with grain left on farm are creatures of habit, and they won’t let the last of the grain they have to sell go until they’re much further into the growing season.”

“It’s more wheat in Portland and Melbourne, and barley into Geelong.”

He said the competition between domestic and export buyers was supporting the nearby market, but new-crop was looking at an inverse.

“There isn’t an active market in new crop yet; there’s $10 between the bid and the offer.”

He said the new-crop market could well spring to life once growers started looking to sell grain so they could backload urea.

“Selling’s been slow in Vic, but once the crop gets established and growers need some cash flow for fertiliser, and want to pick up some urea for top dressing, that might change.”

Mr Fitzgerald said domestic demand for faba beans has fallen away in the past week or two.

“Fabas rallied in the past six weeks, but demand has softened lately.

“It might be because a few people in southern Vic have been feeding sheep, and now they’ve had good rain they’ll get a bit of feed.

In the northern market, some short covering on barley has seen the Downs market firm to buck the softer trend for the week.

“That’s keeping the old-crop market up, but offshore markets have dropped away, and that’s affecting new crop,” Mr Furse said.

The end to the Queensland sorghum harvest has turned into a long and drawn-out process for some growers.

Rain and damp conditions mean sorghum is being double handled as it goes in and out of driers and graders on the way to export and domestic buyers.

“B doubles are still tight but it ebbs and flows; you can be lucky.”

In Queensland and far northern NSW, growers are racing to harvest the last of their sorghum before a forecast 10-25mm of rain falls in the next day or two.

“Some winter-crop areas are too wet to plant now, and if they get a bit more rain, they might hold some area over for summer crop.”