More rain and flooding in parts of NSW and Victoria is further delaying harvest in districts including Narrabri. Photo: Shaine Maunder, JM Harvesting

COMPOUNDING effects of rain and flooding are driving apart prompt and new-crop prices in southern markets as harvest delays and logistics issues confound any hopes of volume off-the-header business for the rest of this month.

In the northern market, values have softened as new-crop from Queensland and pockets of northern New South Wales provide sufficient volume to cover consumers’ nearby needs.

Grade spreads for milling wheat and malting barley over feed have blown out this week to reflect the impact of rain and unseasonably cool weather on grain quality, and cottonseed prices have shot up in response to logistics problems caused by flooding in New South Wales.

The northern domestic feedgrain market has eased $5-$10/t in the past week as harvest gathers pace in the NSW-Queensland border region and Western Downs, and pushes past the halfway mark in Central Queensland.

Domestic consumers are rebuilding stocks on grain straight off the header, despite some roads, mostly in the wider Moree and Walgett districts, closing due to flooding.

Boggy conditions continue to limit access to some farms and paddocks, but trade sources report grain is moving.

“We can get stuff around, but not in big volume,” one trader said.

Nearby sorghum has bucked the trend by firming $5/t in the past week, largely in response to growers with sorghum to sell being focused on their winter-crop and needing an incentive to find time to outload the red grain.

The rally appears likely to be the result of road and rail closures in place from the Murray River to Wee Waa in the Namoi Valley of northern NSW.

Many districts had a week without rain, but others copped another dousing.

In northern NSW, registrations in the week to 9am today include: Gunnedah 54mm; Moree 4mm; Narrabri 69mm; Walgett 45mm.

Plenty of crops are ripe enough to harvest, but accessing paddocks without getting bogged remains the issue.

The prompt market for SFW wheat has jumped $30/t in the past week in response to ongoing harvest delays to blow out the inverse between here and new-crop to an unprecedented $65/t. 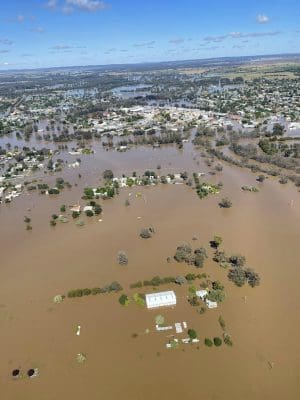 All roads, including the Newell Highway, into the central NSW town of Forbes are cut by floodwaters. Photo: Transport for NSW

A few early crops of barley have hit the bins in south-west NSW and the Victorian Mallee, but December instead of the normal November looks like being the big month for southern barley.

“The difficulty is that people have stock and can’t access it.

“It’s pushed the inverse right out.”

The result has been a run of contract wash-outs, and short covering on what limited old-crop can be found.

The wet growing season means wheat in volume of more than 10.5-per-cent protein is likely to be a rarity in NSW and Victoria, and huge areas of lucerne have been lost to flooding across both states.

As a result, an increased proportion of soy, canola and meat meal can be expected in feed rations in 2023.

Light testweights for barley are also expected, as barley ripens before wheat and has therefore borne the brunt of recent rain.

“Barley is going to be questionable from a quality point of view.

“We’re starting to see F2 and F3 segregations open up as more and more rain falls.”

“That probably kicks barley out of the ration for monogastrics.”

Disease problems in Victoria’s faba bean crop are also becoming more widespread, with off grades now opening to take in product which will not meet export specifications.

While Bendoc was the variety that showed itself early on to be susceptible to chocolate spot, the other two main varieties, Amberley and Samira, are also succumbing to fungal pressure.

“We’re starting to see wash-outs on some faba bean contracts.”

Much of the Victorian Mallee and Wimmera had yet more unwanted rain in the past week.

The barley harvest in the southern Riverina of NSW is running around three weeks later than normal, and one trader said old-crop is hard to access because growers are prioritising flood-related issues on their own farms.

That includes preparing to direct head rather than windrow canola, and readying silo bags as an alternative to carting out of sodden paddocks.

“Roads are horrendous because of flood damage, and access is a big problem for getting grain in and getting feed out,” one trader said.

“Transport operators and the trade are going above and beyond to get stuff where it needs to go, but nothing’s plain sailing.” The last southbound train out of Tocumwal ahead of the line closing temporarily while the latest flood peak passes in the Murray River. Photo: Matt Kelly, Kelly Grains

Kelly Grains is based at Finley in southern NSW, and merchant Matt Kelly said the rail line connecting Tocumwal with the Port of Melbourne is about to close due to the latest flood coming down the Murray River.

The closure is expected to be in place for a week, and follows a similar event last month.

With the Newell Highway, the main north-south artery in NSW, closed due to flooding in Forbes and the Lachlan Valley generally, Mr Kelly said cottonseed from gins in the Macquarie Valley cannot be easily accessed.

“If trucks want to get it here, they have to go via Broken Hill; that’s not viable.”

Mr Kelly said sound-quality wheat can still be expected, but of insufficient protein to get it into Hard segregations, as can normally be expected to dominate in the Mallee and western Riverina.

“We’re expecting to see more APW and ASW because of the cooler season, and with the wetter finish, not much H2 or H1.”

Eastern Australia’s flood crisis is focused this week on Forbes and Eugowra in the Lachlan Valley, and heavy rain in the past week above and below dam walls in central and southern NSW means more releases from catchments in coming weeks are likely.