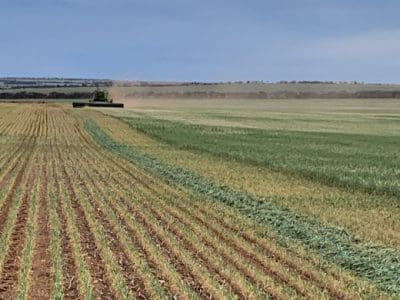 A cereal crop being cut for hay this week at Buckleboo on South Australia’s Upper Eyre Peninsula. Photo: Tristan Baldock

A TOUGH start to spring is cribbing tonnage from the eastern Australian cereal crop as hay-cutting advances on struggling crops, and supports prices for cereals in nearby and new-crop slots.

On the production front, average or better wheat yields in Central Queensland (CQ) are feeding grain into prompt markets with some urgency.

“Early demand from the Western Downs is putting trucks under headers in the paddock as the consumer tries to get some early new-crop cover,” Mr Vaughan said.

Prices to CQ growers for immediate sales equate to around $360-$370/t, and CQ wheat is trading delivered at a $5-$10/t premium over the Brisbane free-on-truck market, which continues to out-turn grain shipped from Western Australia.

“You may be seeing 11-12 per cent protein out of CQ, which would be a lift over what you’d get from ASW-type wheat from WA.”

Sorghum from the Downs and CQ is also trading in reasonable volume in the Queensland market, and is selling at around $305-$310/t on-fa

“There are some prompt bids for feedlots, and from pig and poultry producers, for it.”

Central and northern NSW has continued to price off external markets, with southern NSW up around $10/t in the past week.

The Griffith ASW wheat market for prompt delivery has been trading in limited volume at $360/t, $20/t over new-crop.

“At those values, grain works from southern NSW into northern markets.

“This crop is shrinking before our eyes, and if it stays dry for two or three weeks, things will get tighter.”

“If we don’t get an inch of rain around the Mallee in the next couple of weeks, a lot of crops will be cut for hay.

“In the southern Riverina, things aren’t that good either.”

Mr O’Neill said some crops north of the Victorian border were lacking bulk, but ones in the Mallee were in much better shape.

“If they cut hay in the Mallee, there’ll be a lot of that and not much grain.”

Current-crop wheat is trading at around $340/t delivered central Victoria, but barley is scarce.

“It’s all about execution for that market,” Mr Robinson said.

“That whole market will continue to be fed by grain out of WA for the rest of the year, and it’s moving in unison with those WA prices.”

In the prompt Downs market in southern Queensland, WA wheat and barley from the FOT Brisbane market are trading at $410-$420/t.

Delivered January wheat is holding its value, but new-crop barley is trading at a $30-$40/t discount to wheat, out from $15-$20/t last week.

Trade sources say hay prices have eased in the past week now that hay-cutting is under way and increasing prompt supplies.

“The sheer volume of hay hitting the market out to November is having a bit of an impact,” Mr Robinson said.

Grain by rail and hay by road from South Australia are continuing to make their way into NSW.

While some crops on the Upper Eyre Peninsula and Upper North are being cut for hay, the state’s southern growing regions, like the Wimmera and Western District in Victoria, have potential for at least average yields.

Cottonseed transactions have slowed to a trickle on firmer prices.

The ginning by-product provides valuable fibre and energy to supplementary-fed animals but continued feed shortage has both buyers and sellers appearing to ration their appetite for business.

“Offers are getting hard to find and even though demand is only small volume, still very much dry-weather generated, it’s enough to keep pushing values,” Woodside Commodities manager Hamish Steele-Park said.

September pick-up cottonseed ex Namoi Valley sites was offered at $610/t, compared with $620/t in the Moree region, and $560/t in the Riverina in southern NSW.

The inverse to new-crop 2020 cottonseed gin-spread pick-up was quoted at around $60/t, but the market lacked structure in the absence of sellers.

Those feeding sheep and cattle in drought-declared regions are buying hay and pellets as well as cottonseed, with their decision based largely on freight differentials.

ASX wheat and barley futures traded every day this week, with prices lifting most sharply on Monday and Tuesday.

Values for ASX wheat lifted 5pc over the week, while barley gained 7pc.

The ASX feed barley (UB) January 2020 contract traded 645 lots during the week and the settlement price firmed each day.