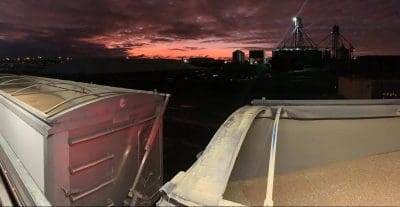 PRICES for feedgrain have fallen to reflect the disappearance of short positions and an improved flow of road transport during a week of very welcome dry weather for most districts.

While grower selling remains quiet ahead of the new financial year starting July 1, the trade appears to be unwinding some positions in the north especially.

Coupled with increased grower selling in the south, this week’s softer prices are encouraging consumers to advance coverage into August and beyond in some cases now that prices appear to have stabilised.

Sources in both the northern and southern regions say grain from the Port Kembla zone is not yet working into the northern domestic market, but this may change as unpriced stocks of sound wheat and barley run down in the north.

However, a number of bulk sites are able to out-turn grain now that skies have cleared.

“Combined with the dry weather, and the better availability, the market is down $10-$20/t,” Mr Carsberg said.

“It is good to see a softening in the market, and the flow of grain to the consumer improving.”

Mr Carsberg said the peak resulted in grain stocks at a number of feedmills across southern Queensland getting to “critically low levels”, largely because of a shortage of trucks, and the impact of rain on short-term grain availability.

Grain sites from Moree and points north are currently supplying the bulk of the grain to consumers north of the New South Wales-Queensland border.

“Farmers have grain, but they’re too busy planting to load trucks at the moment.

“We might see more grain become available on farm in July-August once they’ve finished.”

Trade sources report domestic trade in top-grade sorghum is limited, and Sorghum 2 has been trading in reasonable volume at around $360/t delivered Downs, roughly $30/t below the premium grade.

Downgraded F3 barley is also trading in reasonable volume as growers look to reduce their stocks of off-spec grain ahead of what will be a big early winter crop.

“More end users have pulled out of barley and switched to wheat; that’s been happening for months,” Mr Knight said.

Reid Stockfeeds commodity manager Justin Fay said corn, priced at a similar level to wheat, was attracting strong interest from stockfeed millers, and selling interest from the grower has picked up.

“More is coming to the market from the grower now; they’re past that crucial sowing period,” Mr Fay said.

“All of a sudden, there’s a little bit more flow.”

Barley prices in the south have eased, while wheat has held mostly steady on feed grades.

Key Agri Services broker Matt Noonan said most growers in the Port Kembla and Melbourne port zones had finished planting, and interest on the sell side was rising.

“There are some pockets of resowing, and guys are getting back on to their country now to spray and put urea on,” Mr Noonan said.

“As we see new-crop shape up hopefully okay, anyone with stock will have to look at executing; there’s only another 18-20 weeks before new-crop hits the bins.”

Mr Noonan said grain in both zones was going mostly to up-country and Melbourne consumers, and to export.

“There are more export homes for wheat than barley, but there are a few barley vessels in the back end of the year.

“We’ve got past those four-day weeks in April, and rain, and most programs are back where they need to be.”

Cottonseed values in southern NSW are stronger than those in Queensland and northern NSW, with the oilseed in demand from the boxed market going out of Brisbane, Sydney and Melbourne.

“This is mainly due to the fact the only available packing space for containers is in the south and the export market is where the demand is,” Woodside Commodities Hamish Steele-Park said.

Mr Steele-Park said cotton picking is “way behind schedule” due to the wet and cool season, and pipeline stocks are lower than they would normally be at this time of year.

Grain Central: Get our free news straight to your inbox –Click here