HARVEST pressure in southern Queensland and far northern New South Wales has seen barley values drop by $20 per tonne or more in the past week, but wheat has inched higher to reflect the later-than-normal harvest.

Wheat is also finding significant support from export accumulation at South Australian ports in particular as traders post some shiny bids in south-west NSW and north-west Victoria to compensate for a below-average crop in the drier regions.

In Queensland, registrations in the week to 0900 have been very patchy, and include: Clermont 40 millimetres; Dalby 4mm; Emerald 36mm; Springsure 54mm.

Heaviest falls occurred in the Central Highlands, where harvest is all but over, and rain has bolstered subsoil moisture ahead of summer planting of sorghum.

South Australia, NSW and Victorian growing areas north of the Western District had a mostly dry week, but Western Australia had widespread rain with most gauges in the growing regions catching 10-25mm.

Since yesterday, rain and hail has hit some crops in WA, and SA’s Eyre and Yorke peninsulas.

Queensland’s barley harvest on the Western Downs and NSW border region is nearing completion for some growers as activity turns to wheat.

Northern prices have mostly sagged under the near-term pressure as some growers and grower brokers up their selling into depots and nearby consumers.

“It has dropped in the past two days, and now it’s become convincing,” Mr Coventry said, adding that barley quality and yields seemed to be good in districts as far south as Moree.

“Wheat now is just getting going.”

Mr Coventry said many consumers were yet to start covering their 2022 requirements, but were in no hurry as ample new-crop supply is only weeks away.

“A lot are uncovered for January forward, but there’s a big crop coming.”

Limited road transport for longer hauls is having an impact on prices, and making sellers more likely to take bids offered at local homes as contractors and carriers creep south with harvest.

“It makes it harder for harvest to get cheaper than January, and the challenge of finding trucks is keeping delivered homes up a little bit.”

Another trader said barley had “fallen off the perch” in the past couple of days, and dropped $10-$15/t.

“A few people are throwing up some large tonnes to the market, and buyers are being selective.”

“Wheat’s not as volatile, and there’s ongoing business to the ports happening.”

Grain Central understands off-season work on the Bellata-Moree rail line is winding up and it will be handed back to operators on Monday as scheduled.

The line will be operational during harvest and the months following to allow new-crop grain to be railed to export terminals.

This will free up trucks that have been carting grain, mostly to Brisbane, while the line has been closed for upgrading associated with the Inland Rail project.

SA bids shape up in south

In South Australia, Australian Grain Export trader Tyson Hewett said port bids for wheat and barley were stronger than comparable ones into Victorian terminals, and had turned the usual harvest scenario on its head.

“Victorians would normally enjoy a premium from the domestic market, but this year, the South Australians are enjoying an export premium.”

“The world wants our grain, and Australia is well priced.” 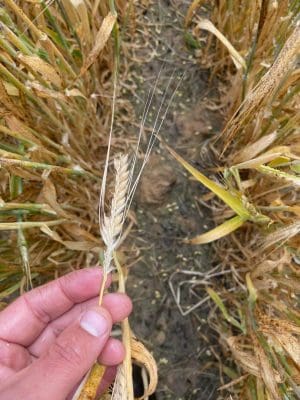 Mr Hewett said most domestic consumers were buying hand to mouth, and this was supporting the last of the current-crop pricing.

“Wheat is two to three weeks away and there’s very little around in South Australia, so some is coming from western Victoria to bridge the needs.”

Of all the states, South Australia has had the driest of growing seasons, and a hailstorm this morning has impacted yield prospects on some crops.

It means export accumulators are looking to the Victorian Mallee, and even into NSW, to supplement grain it is buying close to Port Adelaide’s four points of export for new-crop shipments.

“SA is at a hefty premium because its crop’s not going to be that large,” Mr Kelso said.

“A lot of grain from western Victoria will go out of SA.”

Showers and storms are on the forecast for Victoria and eastern SA today, and Mr Kelso said was one reason growers had not yet engaged to any great degree in forward selling ahead of the start of the Victorian harvest  in two or three weeks.

This is bolstering nearby markets ahead of new-crop.

Looking at the Australian market generally, Mr Kelso said new-crop bids have eased a little on the firming Australian dollar, and some grower selling, as well as Australian basis which has weakened in response to rallying global values.

“Grower bids are dropping but they shouldn’t drop dramatically, and flat prices are still pretty good.

“The consumer is starting to see early signs of harvest pressure, and wondering if we will get offgrade wheat.”

Also in Victoria, Pearson’s Group trader Reagan Stroud said some late current-crop selling from growers was hitting trade bids in the nearby market.

“Growers always find a couple of hundred tonnes at this time of year they want to clean out,” Mr Stroud said.

Adding to their readiness to sell are the improved yield prospects in north-west Victoria and into NSW thanks to some late rain.

“Some growers north-east and north-west of Swan Hill said they thought they’d be cutting some crops for hay.

“Now some of them are saying they’ll get grain from them.”