CATTLE on feed across Australia during the October-to-December 2018 quarter decreased by 15,977 head or 1.4 percent from the record set in the September quarter, according to the latest quarterly grainfed industry survey.

Conducted by the Australian Lot Feeders Association and Meat and Livestock Australia, the survey showed numbers at the end of December at 1,110,689 head, delivering the first full calendar year where cattle on feed have remained above the one million head mark.

Feedlot industry capacity remains at slightly above 1.3 million head, suggesting occupancy levels remain high at around 85 percent. In operational terms, 90 percent occupancy is considered as high as the figure can get, given downtime for pen scraping, maintenance and other issues.

The modest decrease in numbers seen last quarter was mostly evident in Queensland and New South Wales (see graph below). Compared with the September quarter, Queensland decreased by 20,788 head or 3.2pc to 631,286 head; while NSW eased by 5.9pc to 326,322 head.

These declines were somewhat offset by mostly seasonal gains in Victoria, South Australia and Western Australia which were up 6.8pc, 17.1pc and 60pc from the September quarter to 73,173 head, 40,439 head and 39,469 head respectively. 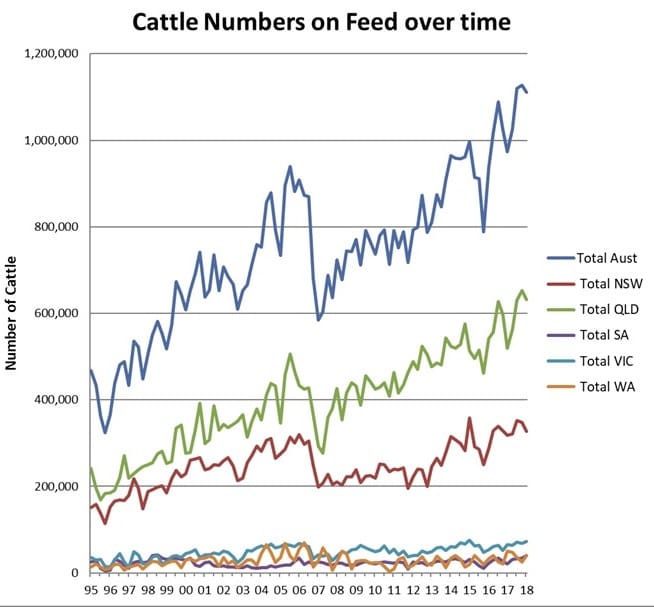 While larger feedlot categories were largely unchanged from the September quarter, the survey showed that smaller opportunity-type yards nationwide tended to reduce operations during the December quarter, faced with high grain and roughage prices brought on by drought. Numbers in feedlots less than 500 head declined 26pc since the September quarter to less than 8600 head; while yards 500-1000 head in capacity declined 21pc to 35,000 head.

Australian Lot Feeders Association president Bryce Camm said 2018 was a significant year for the grainfed production system, which has played an important role in managing seasonal variability and enabling the continued delivery of high-quality beef to global customers.

“There are no surprises that challenging east coast drought conditions and its impact on cattle turnoff through 2018 have been a dominant driver for feedlot utilisation, which sat above 85pc for the majority of the year,” Mr Camm said.

“Grain prices stabilised during the quarter, however consecutive years of poor harvests in the eastern states saw prices for wheat and barley double over a two-year period, with wheat and barley averaging $443/t and $423/t ex-Darling Downs; an increase of 37pc and 33pc year-on-year respectively,” he said.

The Queensland 100-day grainfed steer over-the-hook indicator rose 11pc year-on-year (or 54¢) in the December quarter to average 561¢/kg carcase weight, which was supported by a favourable A$ and robust export demand, Mr Tolmie said.