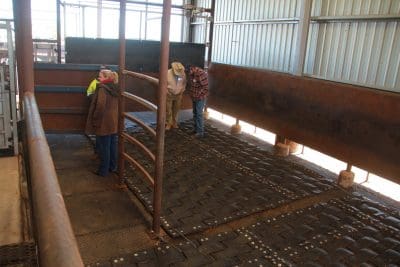 The Bud Box at Grassdale incorporates a small barrier for handler safety (centre). Click on pictures to enlarge.

Most of the initial cattle handling infrastructure developed at Grassdale when it was built in 2007 used Temple Grandin-based designs, including solid-sided curved races and crowding tubs.

However, Mort and Co’s livestock managers opted for a more simple Bud Box pen leading into a new race and crush when the feedlot was expanded from 35,000 head to 54,000 head two years ago.

The Bud Box is a design developed by the late Bud Williams, a widely known and respected American cattleman who became a founder and instructor of low-stress stock handling techniques. 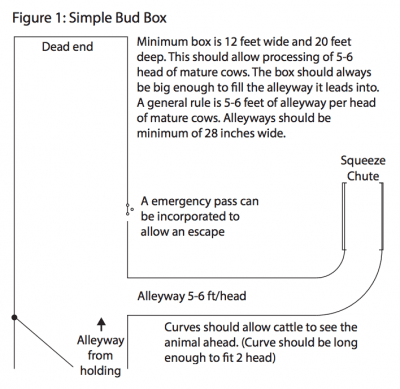 The ‘box’ essentially comprises a rectangular pen of specific dimensions (typically 6m x 3.5m or 20 feet x 12 feet) that encourages the smooth and efficient flow of cattle by working with their natural tendency in confined spaces to seek to return from where they came.

The entrance to the race is placed at a right angle close to the point of entry into the box. As cattle are brought in and move toward the back of the box they then then seek to move back toward the point of entry. The handler is positioned in a way that encourages the cattle to walk around them and move single file into the race (more details and explanations of Bud Boxes here and here).

Advocates of the process say the simple system is more economical to build and can work very effectively but must be laid out correctly and is more dependent on a trained or skilled operator.

Grassdale feedlot manager Brad Robinson said the introduction of the Bud Box had required some adjustments in staff training. 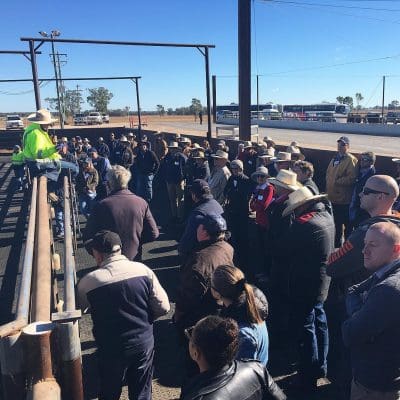 Livestock Supervisor Rick Young told the RNA Paddock to Palate field day audience at Grassdale this week that the Mort and Co livestock team has developed nine cattle handling principles that all staff are taught to ensure they can handle cattle effectively, regardless of which part of the operation they are working in.

“We came up with a system approach,” he explained.

“There’s a lot of jobs we do here, so rather than train every person at every single position we have come up with nine cattle handling principles.

“If they apply those nine principles, it doesn’t matter if they are in a small facility, a large yard, a paddock, loading trucks, whatever, those nine cattle handling principles will allow them to handle cattle appropriately”. 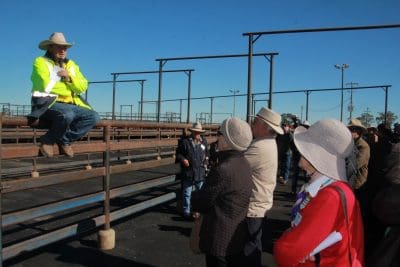 Mr Young manages a livestock team of 37, who start with various level of skills, and oversees a very high turnover business that handles very large daily volumes of cattle.

Last month alone, for example, the team handled 90,000 head around the yard, and put 53,000 cattle through the processing sheds. The newer shed has a Bud Box, Thompson Longhorn pneumatically adjustable-width race and a hydraulic Warwick Cattle Crush. 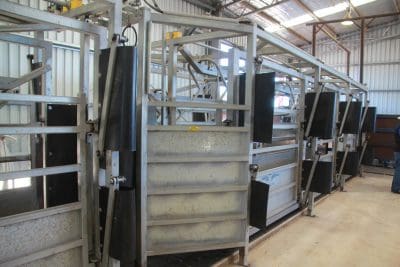 The width of the race in the Grassdale cattle processing shed can be easily pneumatically adjusted to suit the width of the cattle being processed and prevent turnarounds.

“When you’re doing those sort of numbers, you have to make sure you are handling cattle well, that it is safe for staff and good for cattle welfare,” Mr Young said.

“Over the years we have learned that good cattle handling can be taught, and over time if you keep teaching it, it becomes a culture and it leads to good performance. Our cattle handling culture results in good health, high ADGs and high dressing percentages. It is just part of the culture of what we do here.”

The time savings have been significant.

“In the other system from the time we lock them in and they’re under pressure to the time they’re out the other end takes about 28 minutes.

“In regards to our new design, incorporating the bud box, from the time we go out there to get them from the holding pen and put them through the crush is just over two minutes.” 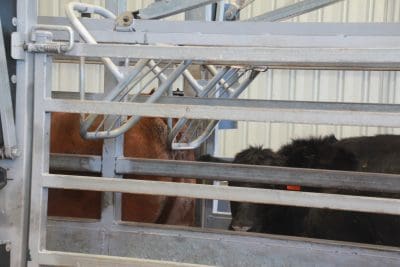 These anti-backing bars can be easily raised or lowered to suit the height of the cattle being handled, and prevent cattle from walking backwards in the race, another major time saving feature.

The time saving means cattle spend less time moving through the system and has dramatically reduced incidents of damaged feet.

Also aiding that has been the application of interwoven recycled rubber tyre flooring imported from the US throughout the cattle handling areas of the new facility. 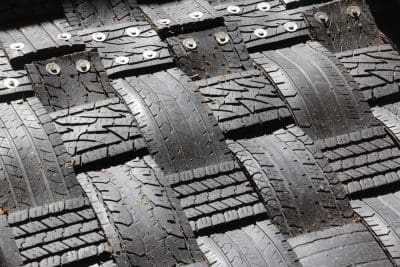 Interwoven recycled tyres provide a softer footing for cattle in the prcessing area.