THERE’S been some substantial shifts in variables factored into Beef Central’s latest regular 100-day grainfed trading budget, but the outcome has not shifted as much as some readers might anticipate.

Essentially, there’s been reductions in the value of ration costs applied to the formula as a result of cheaper grain, and a higher exit price for finished 100-day grainfed steers by year’s end, but these have been largely offset by higher feeder steer purchase prices.

In our calculation carried out yesterday, using our standard, chosen set of variables (see full list at base of page) we have registered a loss of $52 on a 100 day GF ox closing out the feedlot in the last week in December.

That’s a modest improvement on the $66 loss recorded in our last breakeven calculated three weeks ago (August 22).

In line with the general shortage of quality heavy feeders now being experienced, and perhaps also the broader trend in cattle pricing witnessed over the past three weeks, we’ve applied a feeder steer buy-price in today’s budget of 210c/kg for our flatback 450kg feeder animal.

That’s up 10c/kg from last time, and is now getting close to our all-time high feeder price of 215c/kg, recorded back in January 2012, when it hadn’t forgotten how to rain. Keep in mind, though, that our quoted ration price back then was only $250/t, and breakevens only 412c/kg.

The feeder steer price bottomed in May last year (2013) when it hit 150c/kg briefly, meaning his price has risen $270 a head since. 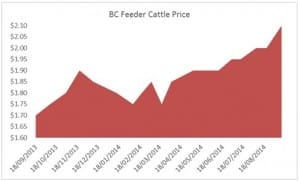 As this graph shows, feeder prices have been trending upwards throughout the year, save for a brief setback in March when dry conditions pushed more cattle to market, before late March rain arrived. Feeders have on average lifted 5c/kg per month since January.

There’s evidence in the market currently of prices as high as 215c/kg for feeder steers meeting our spec, but there’s also more lower-quality and sub-optimal weight category cattle currently going on feed at cheaper prices. That means average buy-price for ideal feeders, when factored across all cattle purchased, is probably closer to the 210c/kg we’ve quoted.

Given the pronounced shortage of heavy feeders that lies ahead, the latest movement in the A$ value, continued extraordinary US beef demand and other factors, Beef Central still sees big upside for feeder steer prices in coming months and into next year. That’s going to be supported, also by the potential for ration prices to continue to move lower, discussed below, and likely further upside in kill values.

Dare we say it: Is a 300c/kg feeder steer a possibility sometime over the next 12 months? We’ll be the first to remind you we raised the prospect, should it occur. Just for the exercise, a 450kg feeder at that price would put $1350 into the producer’s bank account.

New season grain (still perhaps a month away) is perhaps sub-$300/t, down about 20pc from its peak earlier this year of $370/t.

But in contrast, feedlot ration prices as reported in Beef Central’s regular grainfed trading budgets have declined nowhere near as much, falling only around $15/t from its peak of $385/t ,to $370/t today.

There’s two main reasons for this.

The first is continued high occupancy levels in feedlots. It means custom feedlot operators do not have to try so hard to attract business, and have retained a higher margin on ration prices. Once feedlots start to show a few empty pens, however ration pricing will inevitably respond, as they are forced to become more ‘competitive’ to attract business.

Rain will determine if/when that happens.

The second factor is that some feedlots are still working through grain that was bought earlier, at considerably higher prices.

The clearance of those stocks, and continued reduction in demand for feedlot space will likely see that ration price fall away further, market participants tell Beef Central. That occupancy trend wasn’t reflected in the recent ALFA quarterly survey, but that report was already well out of date by the time it was released in early September, referencing the state of play back on June 30. There’s already talk of a few custom feedlots lots holding pen vacancies in the first couple of weeks of September, which has not been seen for some considerable time.

At a ration price in today’s budget of $370/t, today’s trading budget it represents a total feeding cost over a 105-day program of $579, back $18/t on our previous calculation.

All that delivers a breakeven on today’s budget of 460c/kg, up 11c/kg on last time, and a new record for this data-set. Looking back at this time last year, our feeder price was 175c/kg, ration price was $330/t, delivering a breakeven of 396c/kg.

Based on Southeast Queensland direct consignment processor quotes provided yesterday, our forward price for 100-day flatbacks going on feed now and closing-out on December 26 (theoretically, being slaughtered early January, because of Christmas holiday closures), is at 445c/kg, up 15c /kg on last time.

Our quote is based on splitting the difference between current quotes ranging from 440c to 450c/kg in the market. It’s easily the highest grainfed ox price we’ve seen seen since Beef Central started this analysis series back in 2011.

It reflects the general view that international beef markets will continue to firm; 100-day ox may start to get scarce as lotfeeding activity declines, and that the value of the A$ is starting to soften a little and may continue.

All that means the difference between today’s breakeven figure and the forward 100-day price delivers a trading budget result in today’s calculation worth minus $52/head on a feeding program starting today, and closing out in late December. That’s $14/head better than our previous budget.

While our chosen ADG figure of 2kg/day remains a good, and relevant mid-point gauge of feeder performance across the industry, it’s always worth pausing for a moment to look at the impact on results from better-performing cattle.

Springtime is often the best part of the year to produce optimum gain performance, and certainly there are yards that have recorded some impressive recent figures. Note that we purposely do not include seasonality in our formula’s gain performance.

There are still plenty of feedlot cattle gaining significantly below 2kg/day, but let’s look briefly at some better performers. Adjusting ADG in our equation to 2.2kg/day, at the same intake rate of 15kg/day, reduces cost of gain to just 250c/kg, and the breakeven figure reduces from today’s 460c/kg to 446c/kg. That delivers a trading result close to breakeven.

If we take the ADG performance to the extremes of figures currently being recorded for selected mobs, at 2.5kg/day, it pushes the cost of gain back to 426c/kg, and drives the trading result into $72/head profit.

Looking back at 100-day cattle that went on feed back in late June, and forward-bought for slaughter this week, they were selling for 430c/kg, on a breakeven of 438c, against a spot market today of which is pretty much the same. That means processors would be breaking-even in comparative terms with the same cattle bought in the spot market this week.