Big swings evident in grainfed trading budget, but outcome much the same

WHILE there have been some huge swings in variables applied in Beef Central’s 100-day grainfed trading budget since our last calculation five weeks ago, they have largely cancelled each other out, delivering a profit result that’s little changed since our April 23 report. 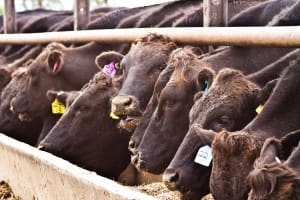 It’s left today’s trading budget at a minus $3.50 profit proposition, little changed from our previous April 23 breakeven, which reported a +$3 result. Those findings are based, as always, on our standard set of industry variables (see full list at base of page).

Cattle entering the feedlot today will close-out in the second half of September, when it’s reasonable to assume that there is going to be some growing tightness in the slaughter market.

For today’s budget, we’ve applied a feeder steer purchase price of 270c/kg liveweight – easily a record for this dataset, and a solid 15c/kg rise since our late April report. There’s some evidence of business being done in a range from 270-280c/kg range for flatback steers hitting our specified weight ex Downs this week, reflective of the broader cattle market.

That price values our 450kg feeder at $1215, easily the highest ever reported in this regular summary, going back four years or more. This time last year, for example, the same steer was still only worth 190c ($855), meaning he is worth $360 more today, or in percentage terms, 42pc more.

While the industry is now coming into the seasonally lower period for feeder cattle pricing, on top of the first blast of winter this week, there has been absolutely no sign of price weakness in the market at all yet.

What’s also still evident is the abnormal price discount for lighter cattle over heavier feeders, which goes against conventional price trends. The discount of anything from 10-15c can only be due to the degree of uncertainty among producers who are now asking, “are these higher feeder cattle prices sustainable?”

The last time people were paying 240c for feeders, they ended up selling them for 160c, and seasonal conditions this year are still far from ideal, meaning there is an element of wariness there in paying too much for young cattle.

For somebody with oats, it is perhaps a good time to buy, but for young cattle going back into pasture, there is an understandable reluctance emerging, especially given recent El Nino forecasts.

For today’s budget, we’ve lifted ration price another $5/tonne to $375/t, with some evidence of pricing in the feedlot market as high as $385, based on current and recent grain pricing.

It’s now pushing back close to our all-time record ration cost of $385/t, recorded just over a year ago. Again, the El Nino forecast is serving to push those grain prices higher.

The fact that Queensland and northern NSW feedlot remain near capacity partly explains that ration price, with custom feeders not having to ‘take a hit’ on their ration margin in order to attract business. In essence, there’s still not a lot of competitive pressure on custom feedlots in terms of how they price their ration to customers.

Most of that grain currently in use has a lot of freight on it, coming from the south into Queensland, which is being passed-on in full by lot operators to their custom-feed clients.

At this week’s designated ration price, it represents a cost-of-gain, using our chosen variables (2kg/day ADG, for 210kg gain over 105 days) of 280/kg, up 4c from last time, and again, not far off our all-time record set last year.

All that delivers a total production cost (steer purchase plus custom feeding price, freight, interest, contingency, levy and induction costs) of $1909 – a hefty $78 rise on last time, and again, easily a record for our breakeven reports.

The above inputs deliver a breakeven in our latest budget of a breathtaking 541c/kg, a 22c/kg rise on our previous calculation, due to the sharp rise in feeder cost and modest rise in ration charge. It’s 19c/kg higher than any breakeven previously seen for Beef Central’s regular report.

This time a year ago, the breakeven figure was still at 438c/kg, the equivalent of $330/head lower, despite a ration price back then at $380/t.

A sure sign of where processors see cattle supply during the back-half of this year is today’s forward price for our finished 100-day grainfed steer, exiting the feedlot September, week-three. The figure has jumped from 520c/kg in our last report five weeks ago (and 505c/kg eight weeks ago) to 540c/kg today.

That current forward price values our theoretical 356kg carcase at a huge $1905 – another $70 rise on last time. That price rise clearly says that there is widespread expectation among processors that cattle are going to get very tight from late August on. Putting some lolly out there will serve to help secure supply, and there is no sign of resistance to such prices yet.

Given a breakeven at 541c, and today’s processor forward purchase price of 540c, it means a pretty much line-ball profit result (minus$3.50 to be exact) in today’s trading budget.

Today’s spot market for 100-day cattle for SEQ slaughter this week is around 510c/kg on public grids, another 10c/kg rise on five weeks ago, and 25c/kg higher than early April.

In comparison, cattle forward-bought, three and a half months ago, for slaughter today, were making exactly the same money, meaning processors are no better or worse off on forward purchases made earlier at 510c/kg compared with today’s spot market.

US feedlot margins are falling deeper into the red, while packer margins improve

Here’s some comparative figures out of the US industry, published last week, to provide some contrast to these figures.

US cattle feeders’ woes continued as margins fell deeper in the red, according to the Sterling Beef Profit Tracker. After climbing US$34 per head the previous week, margins dropped more than US$11 per head last week, with per head losses on fed cattle averaging US$183.15.