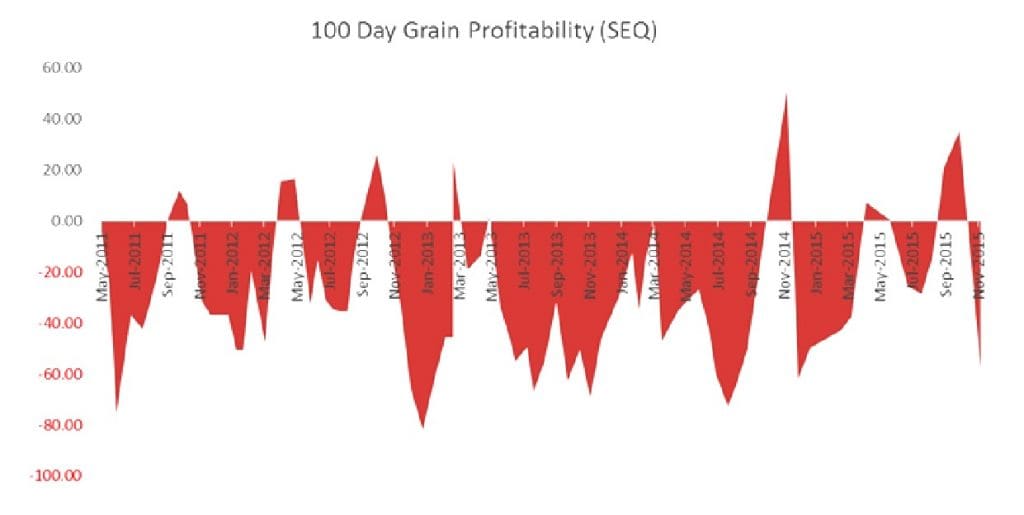 The figure of minus $59 represents a precipitous drop of $94 on our previous profit forecast published back on October 15, when we were still reporting a positive trade of $35 a head.  But a lot of water has passed under the bridge since then.

In essence, what’s happening is that the major integrated processors are currently very aggressive on feeder cattle, but much less so on slaughter cattle price, leaving a big hole to fill, and causing some ‘vacancy’ signs to go up in some feed yards that previously were full to pussy’s bow.

Today’s budget is formulated on our standard set of variables (accessible at base of page) using a typical flatback 450kg feeder steer going on feed today, and closing-out after a 105-day Downs feedlot program on March 9 next year.

To refresh readers’ memories, our previous breakeven in mid-October applied a feeder price at 300c/kg, but a month before that, it was quoted at 315c/kg.

Since mid-October, however, the market firstly dropped, and then recovered very quickly, to the point where we’ve inserted a record 330c/kg figure into today’s budget as representative in the current market.

That values our 450kg flatback at $1485 at induction. Looking back at this time last year, the same steer was valued at 205c/kg, or $922. It makes today’s steer worth $562, or a breathtaking 61 percent, more, year-on-year. Worth keeping in mind is the fact that our feeder steer only hit the 300c mark for the first time in our August 27 budget.

The record price reflects an absolute tightness in supply of suitable heavy feeder cattle, illustrated by the numbers of ‘sub-optimal’ lighter cattle that have been fed over the past 12 to 18 months. Numbers remain tight, despite the fact that quite a number of lotfeeders of dropped the lower end of their tolerance for entry weight.

The arrival of new season grain supply has pushed our quoted feedlot ration price $5/tonne lower to $350/t in today’s budget. Back in July at the high-point, that price was $385/t, representing a $35/t slide since.

That delivers a total feeding cost of $548, down a few dollars from last time, while cost of gain is also marginally lower at 260c/kg.

The cost of gain and feeder purchase figures mentioned above suggest feeding lighter cattle, longer, still looks attractive, reflected in the fact that current delivery specs for many yards are still fairly broad, with some accepting 100-day entry weights down as low as 330kg.

A cost of gain in today’s budget of 260c/kg, compared with a beast that today is worth 330c/kg liveweight, means the COG is currently at a significant discount to steer purchase price. Consequently, subject to maintaining conversions and cattle performance, owners will continue to reduce the cost of production on longer feeding programs, starting with lighter cattle. Some lighter cattle might currently be fed out to 120-130 days to maximise this advantage as a result.

If forecasts of a decline in cattle numbers on feed across eastern states is delivered in coming months (see this morning’s quarterly feedlot survey report article), it’s reasonable to assume that there could be further decline in ration costs in coming months, purely on the basis of lotfeeders having to compete a little more vigorously on custom feed cost, by reducing their margin.

With many large commercial yards close to full for the past 12-18 months, there has been little compulsion on custom feeders to sharpen their pencil on feed costs/margins. It’s meant some yards have reportedly made up to, and even beyond $80-$100 a head on feeding 100-day cattle for custom-feed clients in the past year. We’ll explore that topic in more detail in an upcoming separate story.

All the above variables add up to a total production cost in today’s steer of $2140, a stratospheric $130 higher than our previous budget just four or five weeks ago. To put that into context, back in May last year, that TPC figure was just $1232 – a $908 rise in production cost in the 17 months since.

Combining the above inputs, it delivers a record breakeven in today’s budget of 607c. That’s 37c/kg higher than last time, and the first time the figure has eclipsed 600c, having previously peaked at 594c/kg in our mid-September budget.

This time last year, the breakeven figure was at 450c.

Forward pricing from competitive SEQ grainfed processors for March delivery is currently around 590c, but has fluctuated a little between 560-590c in recent scrutiny. That’s down from a high point around 600c earlier, but some meat market prospects have deteriorated since then, and the A$ has risen a couple of cents, US.

There’s also evidence that several large processors have bought pretty well earlier (perhaps around 570-580c), on the basis of some lotfeeders wanting to cover price risk on their cattle for February-March delivery.

Looking back at 100-day cattle that went onto feed in August, for slaughter this week, their breakeven was 568c/kg, whereas forward slaughter price rates at the time were around 560c/kg. On today’s spot market for 100-day cattle at between 560c and 570c, processors are basically ‘wiping their face’ on cattle forward-bought earlier, versus the spot market.

‘Disastrous’ profitability in US

If readers think results here in Australia look ordinary, spare a thought for our US cattle feeder colleagues, who this week reported record losses of US$525 on cattle exiting the US feedlot system, after 150 days on feed. That’s as a result of some extreme high prices for feeder cattle recorded earlier (US$1700, or the equivalent of A$2430), and a US meat market which has continued to deteriorate badly over the past two months. Today, those same US feeder cattle are worth $400 less (about 25pc) than they were just five months ago, with a 750lb (341kg) feeder steer today worth $1300. While that suggests the worst might be behind them for US feeders, meat prices have also moved sharply lower. Beef trimmings have dropped 28pc in value in the past year, while a WIB price recently quoted US360c/lb, down from US393c/lb a year ago.

Here’s a comment on this topic filed this morning from Beef Central’s US correspondent, Steve Kay (pictured left):

“The losses began in January because cattle feeders paid record prices for replacement cattle (calves and yearlings) last fall and extremely high breakevens have plagued them ever since. More recently, the collapse in the live cattle futures market in September and November forced cash prices far lower each time than anyone expected.