One view is the market will lean towards slaughter cattle because China lacks the stock feed resources necessary to support an imported cattle feedlot industry.

It already imports millions of metric tonnes of soyabean, corn, dried distillers grains and hay from all over the world to feed its massive domestic pork, poultry, dairy and beef cattle industries.

However one of Australia’s largest livestock exporters is confident China will become a future feeder cattle market.

Wellard Chief Business Development Officer Scot Braithwaite said initial sea shipments will involve slaughter-weight cattle as the trade gears up, but the company expects it will move towards feeder cattle shipments within 12 months after the first sea consignments.

“The cost of feed up here is very expensive, but you also have to remember that cows are very good at eating by-products.

“With 1.4 billion people here there are enormous by-products available.”

China has also just de-regulated its corn market which should result in much lower domestic prices. Prior to this Government price support for farmers meant that corn prices in China were typically twice the price of international markets.Quotas also previously prevented domestic feed mills from importing import large quantities of corn and/or feed wheat.

“With the cost of freight in the world at the moment it will cost you $30 a tonne to get corn out of the US or soyabean out of Brazil, so you are basically feeding at world prices.”

The Australia-China cattle export protocol was signed over 10 months ago, but so far only two air-consignments of slaughter cattle delivered under the new trade. 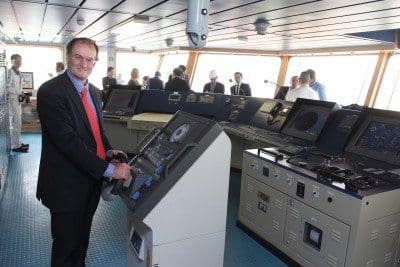 Mauro Balzarini at the helm of the Ocean Shearer at the ship launching ceremony in Dalian, China, last month.

Wellard CEO Mauro Balzarini confidently predicts the market may soon be taking one million Australia cattle, a “drop in the ocean” he says compared to China’s own production.

“China slaughters about 40 million cattle a year, so one million will not make a big difference here,” Mr Balzarini said.

So why hasn’t there been more trade yet?

One hold up both Mr Balzarini and Mr Braithwaite point to is the need for brand new infrastructure to be built before the trade can commence in a large way, under the requirements of the new protocol.

The trade agreement has been designed to supply beef to China’s heavily populated coastal areas without impacting too heavily on domestic cattle producers inland.

It requires that imported cattle must be quarantined, fed and slaughtered within 50km of the port at which they arrived.

Both requirements mean importers have little choice but to build new feedlots and abattoirs to handle Australian cattle. They can use existing facilities, some of which are of a high standard, for imported cattle, but if they do, they can not use the same infrastructure for local cattle.

It is hard to tell for sure how much infrastructure is being developed, but there is talk of a handful of different projects underway, some by existing Chinese meat companies and others by China State-Owned-Enterprises.

Wellard says it has also now started work towards building two new feedlots and an abattoir near the port of Tianjin (the main port near Bejing) in conjunction with its Chinese joint venture partner Fulida.

“They are preparing the ground, there is no building yet, but it is happening,” Mr Balzarini said.

One reason for building two co-located feedlots is protocol related.

The agreement stipulates that if one animal from a previous consignment remains in a feedlot when a new consignment of cattle arrives, the new consignment cannot be discharged into the same feedlot. This applies both pre-export in Australia and post-import in China. 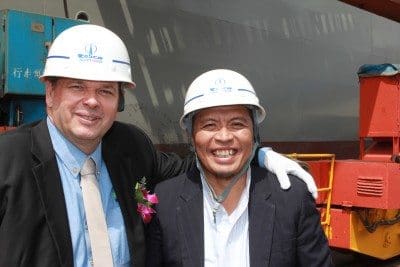 Wellard is also looking to build a new cattle pre-export-quarantine facility near the Victorian port of Portland for the specific purpose of handling cattle for China. As previously mentioned, the protocol requires that cattle assembled in Australia for export to China must not be mixed with another consignment in pre-export-quarantine.

The type of cattle likely to be imported will be 380-400kg Bos Taurus (or Simmental-infused cattle similar to China’s own herd) aged 12-14 months from southern Australia. China has placed significant and costly conditions on cattle imports from northern Australia due to its concerns around Bluetongue virus, even though the BTV strain evident in northern Australia causes no disease in cattle. The protocol effectively requires that northern cattle would have to be trucked south into a BTV free area and quarantined for at least 60 days before they could be shipped from Australia, adding considerable cost.

The protocol also stipulates that imported feeder cattle must be fed and slaughtered within 90 days of arriving in China.

The Wellard abattoir development will cost about $15 million. Construction costs in China are about one seventh of what it costs to build in Australia.

Wellard is confident it can get at least one and possibly more sea shipments to China before the end of this year. 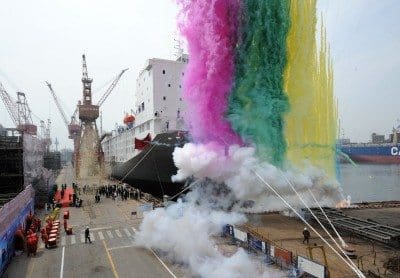 A curtain of colour explodes from canons during the official naming ceremony for the Ocean Shearer in the Cosco Shipyard at Dalian.

Despite the onerous conditions contained within the protocol, Mr Braithwaite said it will still be commercially viable to export beef cattle to China. The tougher conditions had effectively deterred the less committed parties.

“It has certainly sorted them out over here,” he said. “Everyone wanted to import cattle over here, until they realised how much it was going to cost to make it work.

“There is also a huge influx of frozen carcase beef coming in from Brazil and Uruguay, and that has slowed some of them down as well.”

If and when the trade does start to reach large numbers, it could absorb significant shipping capacity. A single run from ports in Southern Australia to ports in Northern China will take between two to three weeks at a time.

Wellard feels it has an advantage in this regard with the large ships in its fleet.

“A small ship will probably be not ideal for that trade due to the distances involved,” Mr Balzarini said. “Initially smaller ships will work because people don’t want to start too big, but when the market is operating, maybe in two years, I think the big ships will have a big advantage.”