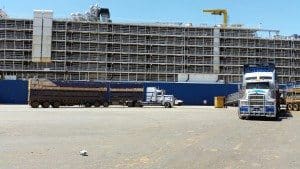 In a new statement to the ASX, live exporter Wellard Limited has confirmed it is one of four Australia exporters to have now received ESCAS (Exporter Supply Chain Assurance System) approval in China from the Australian Department of Agriculture and Water Resources (DAWR).

In the same statement it has also announced that it has begun sourcing Australian and New Zealand dairy heifers to fill a new contract for 20,000 dairy cattle for Sri Lanka (more below).

ESCAS approval is required before an exporter can deliver slaughter cattle to China under the trade protocol signed in July 2014.

The identity of the four exporters has not been publicly disclosed.

With its statement to the ASX on Friday Wellard has now confirmed they are one.

Elders’ North Australia Cattle Company is also likely to be another, as it is understood to be well advanced with plans to send a first sea-shipment of cattle to China under the feeder/slaughter cattle protocol.

Wellard’s approval was received for a supply chain in northern China.

Wellard said the approved ESCAS application is the first of several it has submitted for assessment in China by DAWR.

“The DAWR ESCAS approval of the Chinese supply chain is an important step for Wellard to commence export of slaughter cattle from Australia to China,” said Wellard CEO Mauro Balzarini said in the statement to the ASX.

“Following an independent audit, the ESCAS approval demonstrates that our Chinese customer will meet the animal welfare, traceability and audit standards required to receive Australian livestock.

“We are in active commercial negotiations with a number of parties so that Australian beef farmers can capitalise on the opportunity created by the large Chinese consumer market and the live cattle access arrangements negotiated by the Chinese and Australian Governments.”

Wellard expects that it will commence exporting beef cattle to China in the first six months of 2017.

Wellard also said it has begun sourcing an initial 5000 Australian and New Zealand dairy heifers after a contract to supply 20,000 dairy cattle and technical management services was renewed by the Sri Lankan Government.

Following the completion of an incoming Government review of a program previously agreed between Wellard and Sri Lankan Sri Lankan Department of Economic Development, the Sri Lankan Ministry of Rural Economic Affairs has provided approval to Wellard to ship the first heifers next year.

The contract extends Wellard’s penetration in the dairy market in Sri Lanka, and follows two previous projects totalling 4,500 heifers which were landed in Sri Lanka between 2012 and 2015 and the results have exceeded expectations.

The new heifers will be placed with local farmers to help build their incomes and to improve the domestic supply of fresh milk to Sri Lankan citizens, reducing the country’s reliance on expensive,

The program with is being principally financed by the Australian Government’s Export Finance and Insurance Corporation (EFIC) with Rabobank.

“Wellard is proud to be part of this program with the Sri Lankan and Australian Governments. It will have a positive impact on many Sri Lankans and will particularly benefit rural communities with modern, intensive management practices, to help Sri Lanka reduce its reliance on imported powdered milk in favour of fresh milk self-sufficiency,” Mr Balzarini said.

It is anticipated that 3000 of the 5000 high performance genetics heifer will be supplied by Australian dairy farmers, with New Zealand supplying the balance. The bulk will be sourced from South Australia, Victoria and New South Wales.

A timeline for the consignment of the remaining heifers will be agreed after successful delivery of the current shipment.