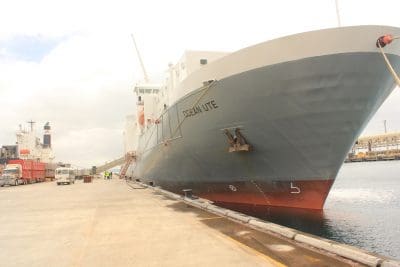 Wellard says it is in the early stages of planning a new vessel to replace the MV Ocean Ute.

In announcing its FY2021 results to the ASX today Wellard has also revealed plans to design and develop a new vessel.

The reduction in revenue was attributed to issues with an extended dry dock of the M/V Ocean Ute, the sudden suspension of the live cattle trade from New Zealand due to the tragic sinking of the Gulf Livestock 1, a 30 percent drop in northern Australia’s cattle export trade to South East Asia compared to FY2020 levels, and additional crew change costs caused by COVID_19 restrictions.

Helping the company to offset those impacts was a significant increase in demand for its vessels to transport breeding cattle to China, from Australia, New Zealand and South America.

That compared to nine voyages the previous year.

Executive chairman John Klepec said demand for these routes is expected to remain strong in FY2022 “with numerous voyages chartered”.

“As the pricing of Australian-sourced breeding cattle has increased due to supply constraints, quality alternative sources such as Uruguay have been utilised by exporters,” he said in his annual report to shareholders.

Mr Klepec said the increased activity in shipping to North Asia helped keep vessel utilisation rates high during a fall in live feeder and slaughter cattle exports from Australia to Southeast Asia, which fell by 30 percent.

“The fall in numbers was caused by the reduction in the supply of cattle marketed by Australian producers who are in a herd rebuilding phase after a period of prolonged drought, and consequently high Australian cattle prices rendering imports of Australian cattle financially problematic for their overseas buyers.

“Australian cattle prices remain the highest in the world at the time of writing.”

Mr Klepec said the pricing dynamic of Australian beef is causing considerable issues in the traditional markets of Indonesia and Vietnam which are price-driven, with alternative sources continuing to build material market share.

“Only when the volume of Australian beef increases, as it will when the local herd rebuild is completed and there is surplus stock available, will we know whether the loss of market share in Southeast Asia is entrenched.

“Our expectation is that this will not occur until FY2023.”

Commenting on Wellard’s second successive annual profit Mr Klepec said the result was attributable to “effective commercial contingency plans, good underlying cost containment and excellent utilisation of Wellard’s vessels throughout the second half of the year”.

He said the result demonstrated that last year’s profit was not a “one off event”, and reflected previous changes to Wellard’s debt structure, operating cost base and business strategy.

The company’s three vessels had been chartered from the commencement of FY2021 right through to mid-November and early December 2021.

“With good inquiry beyond that timeframe, we are entering the new financial year with positive operational and financial momentum,” he said.

“As a result, we are now turning our attention to growth and renewal opportunities, particularly with the Wellard livestock fleet, and looking carefully at how those opportunities can be funded without stressing the Wellard balance sheet.

“It is critical that there is continued investment in the livestock fleet so that innovative, modern vessels with state of the art technologies provide the best animal welfare outcomes for the livestock in our care.”

In its statement to the ASX the company said it has commenced the process of identifying a replacement vessel for the M/V Ocean Ute, and has commissioned an initial technical study into vessel design and specifications.

The new build would likely be powered by alternative fuels or a combination of fuels, and be capable of steaming at more than 17 knots.

At present, alternative fuels were not widely available, and were unlikely to be available in some of Wellard’s load or destination ports, so a dual-fuel system was required.

Rather than taking on high debt to fund a new vessel Wellard said it will look to “off-balance sheet funding alternatives” for the construction of a new vessel.

Other developments listed in the statement include:

Wellard said COVID-19 continued to increase operating costs for Wellard, but has had little impact on demand for its vessels.

The biggest impact on the Company’s operations remains the restricted ability to undertake crew changes.

Pre-COVID-19, crew joining or leaving vessels were flown to and from convenient international ports to meet the vessel or to return home.

Now, its vessels must transit via Manila on their ballast voyages to complete crew changes.

“This increases ballast voyage sailing times, which has both a direct and an opportunity cost to the Company.

“There are also longer berth times at each port of call to comply with COVID-19 procedures.”

It noted that Meat & Livestock Australia has forecast that the number of cattle exported live from Australia will grow by 30 percent in FY2022 and a further 13 percent in FY2023, which would be “a positive development”.

Wellard said that in FY2021 its fleet matched its FY2020 performance figures, once again recording one of the highest success rates in its history, achieving a 99.9 percent success rate for the 186,985 head of cattle loaded during the period.