Wellard’s MV Ocean Drover which has been listed for sale recently delivered 9265 Angus heifers from Montevideo to Lianyungang, China.

WELLARD Limited has announced a major management reshuffle and ‘strategic refocus’ just weeks out from the release of its full year results for the 2017-18 financial year later this month.

Under the changes announced to the ASX today:

The Wellard statement said the company is undergoing “a strategic refocus in respect of its livestock and charter divisions”.

“Wellard’s strategic themes remain the same, with a principal goal being to continue to rebuild the company’s balance sheet. The company will remain both a cattle trader and a charterer,” the statement said.

“In the immediate short term, Wellard will concentrate its charter division primarily on the South American live cattle export market to Europe, whilst its live cattle export division will narrow its focus to trading Australian-sourced cattle to the South East Asia market, where Wellard has been the dominant supplier.” 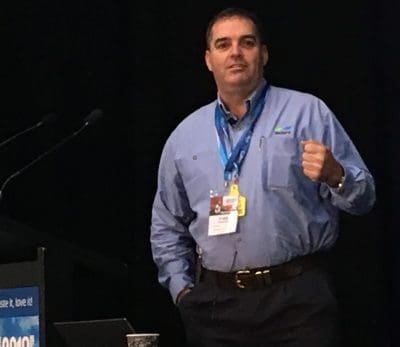 Fred Troncone speaking at Beef 2018 in Rockhampton in May.

The statement said that in refocusing the strategy, the Board and Mr Troncone “concluded that this should be implemented by a new senior manager” and consequently Mr Troncone will leave Wellard. Mr Klepec was requested by the Board to manage the operations role until a permanent replacement is identified.

In the statement Mr Klepec thanked Mr Troncone and “recognised the significant contribution he had made to Wellard at both a Board level and subsequently as Executive Director – Operations, particularly in helping stabilise the business during difficult market conditions, and in relation to a very successful costs out program”.

Mr Klepec said Wellard planned to release its financial results in the second half of August.

“When we released our financial results for the first half of FY2018 Wellard provided a detailed outlook for the remaining six months of the financial year. There have been no material changes between the outlook and the trading conditions that occurred in that time,” Mr Klepec said.

He said Wellard vessels enjoyed strong bookings to the end of calendar 2018.

“With cattle prices in Australia stabilising at lower, more attractive levels, the Company is receiving increased interest from South East Asian markets and is looking at regaining market dominance in this core trade,” he said.

Shipment from Uruguay to China

Mr Klepec said Wellard had recently exported and transported its first ever shipment of cattle from Uruguay to China. The shipment of 9265 Angus heifers was the largest recent consignment shipped between the two countries, and achieved a voyage success rate of 99.9 per cent for the 30-day voyage from Montevideo, Uruguay, to Lianyungang, China.

“The success rate achieved on this voyage is further evidence that with modern ships and expert onboard management livestock can be safely and successfully transported across large distances,” said Mr. Klepec.

The Wellard statement also noted recent media reporting regarding the potential sale of its livestock vessel, the MV Ocean Drover.

“Wellard will consider selling the vessel if any offer provides a superior return on equity for shareholders on a long-term basis compared to operating the vessel itself.

“The company will make the requisite announcement to the market if a transaction is agreed.”

The statement said Mr Klepec’s existing Chairman’s and associated Director’s fees are currently $235,000 per annum, and he will receive an additional monthly fee of $31,000 until 31 December 2018 in respect of the additional interim duties which he will provide on a consultancy basis.

Mr Klepec will revert to the role of Chairman following this interim engagement, the statement said.