Wellard adds a ‘ute’ to its livex fleet 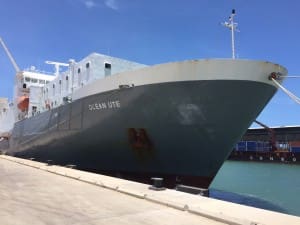 Buying a ute wouldn’t normally rank as news for one of Australia’s largest livestock export companies, but this is a ute with a difference.

Wellard Rural Exports has announced the acquistion of a live export vessel which it has named the “Ocean Ute”.

The name is a nod to the workhorse role played by the farm ute which has served generations of Australian farmers.

Wellard CEO Mauro Balzarini said the company had been viewing an addition to its stable of workhorses for some time, but had been unable to find the right one, until now.

“Like any Australian rural-based business, we recognised the value of owning a ute and quite frankly I wish we had been able to buy this ute sooner given the huge number of uses for it,” Mr Balzarini said.

“It will be invaluable to our business going forward and I’m looking forward to getting behind the wheel.”

Mr Balzarini said although Wellard traditionally bought new vehicles, the ability to purchase an older model at the right price that suited the Company’s immediate needs proved the deciding factor.

“It will fit right in with our other vehicles once I arrange for a new paint job,” he said. “It has the power to weight ratio that we require and with its fuel economy it will be able to cover large distances with a large payload without the need to stop for fuel.

“The ute has been put to work quickly given current seasonal conditions have created an immediate need for it, though when we get a chance we will stick it up on the hoist to give it a good once over so that it can continue to rack up the miles safely.”

The MV Ocean Ute is the fourth ship in the Wellard fleet, joining the Ocean Swagman, Ocean Drover and Ocean Outback.

The MV Ocean Ute was converted into a livestock carrier in 2010.

The MV Ocean Ute is classified by Bureau Veritas.