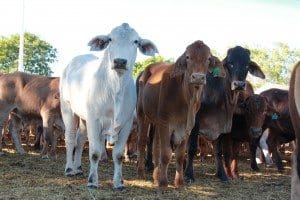 Live export prices could be coming under downward price pressure for the first time in several months as dry conditions push a wave of cattle forward ahead of the upcoming first round mustering season.

Driving the growth has been strong demand from South East Asia for feeder and slaughter weight cattle versus a tight supply of suitable steers and heifers, reflecting successive years of low prices and drought conditions across northern Australia.

With dry-season musters for the new live export season set to start in the next month or so there is some talk that drier than expected seasonal conditions are now prompting cattle producers to lock-in prices before mustering starts, which is contributing to an improvement of supply relative to demand.

“There are plenty of 2016 cattle coming forward for contract and that is putting downward pressure on values,” one export industry source commented this week.

Beef Central’s inquiries to exporters, agents and producers in recent days suggest that prices for feeder cattle for immediate delivery are still strong, while prices for heavier export cattle to fill ready-for-slaughter orders appear to have taken a slight hit of around 10c/kg compared to rates being offered last month.

The general consensus seems to be that prices could come under pressure if drier seasonal conditions continue.

“With the uncertainty in the north there is definitely a wave of cattle on the move,” one regular live export buyer, who asked not to be named, told Beef Central.

“Even those who had a bit of rain, the feed is only short, and they have a lot of weaners coming on.

“So they are saying, ‘well, and with the prices going around, they are the best prices we have ever had, we can quit last year’s steers and get $1000 and make room for some weaners.”

“Two years ago they wouldn’t have got half of that for a bullock.”

One current live export order for delivery to Charters Towers in the first week of April is quoting $3.45c/kg for feeder steers, and $3/kg for heavy feeder slaughter steers. Other orders are reportedly being quoted at around $2.90 for slaughter cattle.

That pricing reflects little movement in feeder steers, and is in fact up by about 5c/kg on the prices being quoted last month. Prices for slaughter cattle were being quoted at around $3.10/kg last month.

Wellard Rural Exports’ Scot Braithwaite said prices for slaughter cattle had started to ease but a 10c/kg lift in the Rockhampton grid had seen the price stabilise reasonably quickly.

Feeder cattle were coming forward as expected as Easter approaches, he said.

“Very strong pricing out of Darwin has encouraged some producers to try and take advantage of the current rates on offer before the season cranks up in the Territory and Kimberley,” he explained.

“On the demand side we think that strong Indonesian orders coupled with plenty of shipping capacity will keep prices for feeder steers reasonably strong.”

A north Queensland livestock agent said he felt that there had been little actual movement in live export pricing so far but believed an easing of prices could be imminent if seasonal conditions remained dry.

“Weather plays a very significant role and people are trying to protect what grass they have got from a management point of view.

“They are not selling all their cattle but are probably selling 60pc. “