MOST “ag tech” in the livestock industry is focused on the paddock, but one piece of smart technology has been delivering a range of gains for the sector on the open ocean.

One year ago Livestock Express installed new “smart navigation” systems in 13 of its modern livestock carriers.

All ships in the fleet were already equipped with electronic chart display and information systems (ECDIS) for safe navigation.

However, the company was reliant on emails and telephone calls to monitor the progress of a particular voyage, operations manager Graeme Stephan explained.

“We had no direct view or control of our ships. we could never see what they were seeing, because you couldn’t share screens or send plans and routings,” he said.

The installation of Wärtsilä Voyage’s Fleet Operations Solution (FOS), a dedicated ship-to-shore connection for navigation, enables the company to directly monitor what is happening on the vessel from the shore.

“From an animal welfare and customer service perspective it gives us much more insight as we can now see real-life the actual plotted route of the vessel and run the forecast as a video which shows how the weather will change in the next week and where the ship is forecasted to be on those timings.

“Ultimately it improves our level of control and safety significantly and from a cost perspective allows us to optimize routings, minimize fuel cost and make better predictions on arrival times in port.

“This last point is of particular importance to exporters as to optimise their cattle deliveries and times in the pre-export facility.”

Mr Ephraim said information showing planned routes and weather forecasts could also be shared with authorities to keep them up to date on the management of the voyage and the welfare of livestock.

Whilst weather monitoring and tropical storm warnings have long been used, the FOS system made it much clearer from the shore side which helped to improve guidance of the vessels.

“We can also go back historically, up to a month, showing vessel performance as well as weather conditions on route, inclusive air and sea temperature. 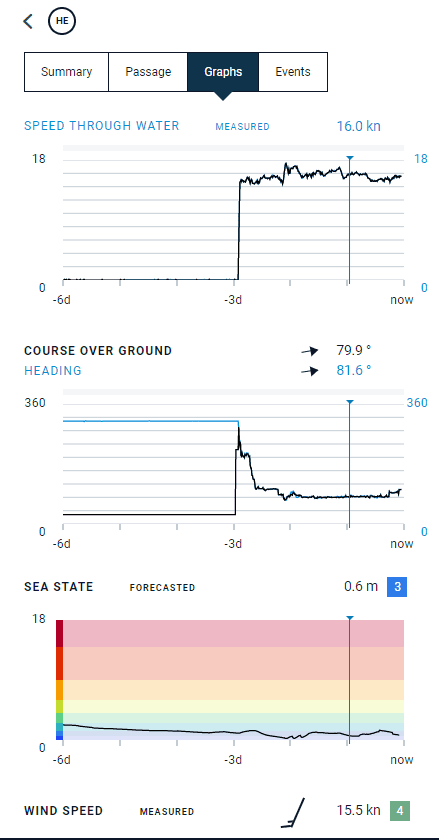 “This allows us to go back in time and link weather events more directly with voyage outcomes from an animal welfare perspective as well as from the perspective of weight performance during voyages.

“Our newer vessels are equipped with motion sensors that track the rolling and pitching of the vessel which again can be brought in the picture for analysis.

“New technologies provide new opportunities to improve and raise the bar in terms of voyage management and stakeholder transparency.”

The FOS enables the shortest safe route to be identified, which has led to advantages in time and fuel efficiency.

As an example of performance gains being realised, Livestock Express recently optimised navigation on a regular route between Vietnam and Australia.

FOS’s Voyage Benchmarking tool identified that the vessel was sailing too far west of Borneo. The company performed a safety check on the potential shortest route generated by FOS, deemed it safe and instructed crew to sail closer to the Borneo coast. As a result, the vessel has reduced fuel consumption on that route by around 10 percent.

There is no global regulation governing livestock exports by sea, but many national authorities set their own rules.

The Republic of Ireland is a recent example visited by Livestock Express vessels that typifies regulatory requirements, Mr Stephan said.

“One of the requirements if you are carrying animals from Ireland is that you cannot travel in areas of above certain wind forces and sea heights. You must report the weather from the vessel back to them each day. We can approach the authorities and show them our intended route and so on. They are happy with that because it is a proactive, visual plan.”

A similar case with New Zealand authorities, especially the Ministry for Primary Industries (MPI), is relevant as well.

“We send screenshots of what we’re doing that day as well as where we plan to sail in a week’s time, plus the track of the storm and how it’s moved or is going to move. I don’t think anybody had done that before from New Zealand.”

There are several advantages to using an integrated navigation solution such as FOS.

In a sector where animal welfare is critical, any tool that improves navigation is valuable.

But it is the enhanced visibility that FOS provides that allows the same tool to be used to train operators and to safeguard regulatory compliance – a triple win for digital navigation.