THE search for 40 missing crew members from the capsized Gulf Livestock 1 vessel in the East China Sea remains suspended with no clear timeline for resumption, according to media reports as Beef Central’s daily news email was sent out this afternoon. 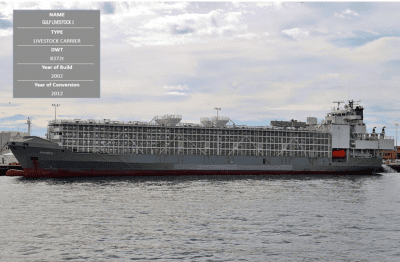 The search was suspended due to bad weather on Saturday as a second typhoon disrupted the region.

Two surviving Filipino crewmen have been rescued, while another died after being found unconscious on Friday.

The Gulf Livestock 1 sent a distress call about 180km from Amami Oshima island south west of Japan in the early hours of last Wednesday morning as Typhoon Maysak lashed the area.

Among the 43 crew members on board were two Australians, Queensland veterinarian Lukas Orda and Sydney man William Mainprize, who was working as a stockman on the ship.

There were also two New Zealanders travelling on the vessel, named by NZ media as father of two Scott Harris, who was on his maiden voyage, and Lochie Bellerby.

The ship was carrying almost 6000 dairy heifers from New Zealand to China. The exporter transporting the cattle was Melbourne-based Australasian Global Exports.

The New Zealand Government said in a statement it has suspended consideration of all cattle exports from the country, as it tries “to understand what happened during the ship’s fateful journey”.

Australia’s Federal Agriculture Minister David Littleproud has also stated he will be “carefully monitoring the outcomes of any investigation into this incident” – more below.

According to reports from the Japanese coast guard, the two rescued crew members said the vessel experienced a loss of engine power in the storm before it capsized.

Ship sailed toward eye of the storm

Typhoon Maysak reportedly reached typhoon strength on August 29 and intensified to become the strongest typhoon so far in the 2020 in the Western Pacific with winds of over 145 miles per hour.

Analysis of the ship’s movements by global satellite analytics firm, Windward, shows the ship was heading toward the eye of Typhoon Maysak when it issued its distress call at 1.40am on 2 September and contact was subsequently lost.

Satellite analysis from Windward, as reported by Forbes.com over the weekend, indicates that the Gulf Livestock 1was the only vessel heading into Typhoon Maysak.

An analysis of other vessels in the East China Sea revealed that all other vessels had moved away from the worsening storm, Forbes reported from the Windward analysis.

“Although crew had reported engine failure, an important area of inquiry would be the decision and tools to sail into the eye of a major typhoon. An analysis of other vessels in the East China Sea reveal that all other vessels had moved away from the worsening storm,” the report said.

The Gulf Livestock 1 was originally built as a container ship in 2002 and was powered by a single diesel engine. It was converted into a livestock carrier in 2015, when it was renamed from the ‘Rahmeh’.

Several reports in recent days have drawn attention to the ship’s history of mechanical issues.

The website Equasis, which collates ship safety information from both public and private sources, stated that in December 2019 Indonesian authorities logged issues with the ship’s propulsion and auxiliary machinery. The issues included “deficiencies” with the propulsion main engine and gauges, thermometers.

A report to the Australian Government in June 2019 lodged by an Independent Observer 2019 noted the vessel’s departure was delayed for a week because of “stability and navigation issues identified by the Australian Maritime Safety Authority (AMSA)”.

AMSA’s website also showed Gulf Livestock 1 was detained by the Australian authorities for three days in May 2019, because of issues related to its navigation Electronic Chart Display and Information System.

Another incident reported in September 2018 by German maritime tracking site FleetMon related to delays caused by the need to fix a mechanical problem that required the delivery of spare parts.

In July this year the Philippine Navy said it had to provide assistance to the ship after it experienced engine trouble south of the Philippines.

The vessel’s sister ship, the Jawan, experienced severe stability issues near Portland in December 2018, and was ordered by the Australian Maritime Safety Authority to undertake stability rectification work in Singapore before it could reload with Australian livestock.

Beef Central has asked the Australian Maritime Safety Authority if the Gulf Livestock 1 was ordered to undertake the same stability rectification works at the same time but has not yet received a reply from the shipping regulator.

Australia’s Federal Minister for Agriculture David Littleproud said the Australian Government’s thoughts are with the families and friends of the two Australians reported missing as a result of the tragic sinking of the Gulf Livestock 1.

“On behalf of the Australian Government, the Department of Agriculture, Water and Environment and the broader Australian farming family, I would like to express our shared concern for the welfare of the Australians and all the crew still missing following this terrible incident.

“I know just how distressing the news of the sinking of the Gulf Livestock 1 and the potential loss of life will be for the tight-knit livestock and veterinarian community, both in Queensland and across Australia.

“We also extend our thoughts to the families and nations of the 40 other crew members reported missing as they come to terms of yesterday’s events.

“The livestock ship was carrying 43 crew as well as 5,800 dairy cattle from New Zealand to China when it capsized in rough seas off the Coast of Japan.

“We understand that the Japanese Coast Guard, who is rendering assistance, has located one crew member and we remain hopeful that more crew will be found.

“The incident underscores the risks that are sometimes involved in conducting our agricultural trade both domestically and internationally and that these risks extend far beyond the farmgate.

“I will be carefully monitoring the outcomes of any investigation into this incident.”

He said the Department of Foreign Affairs and Trade is providing consular assistance to the families of the two missing Australians.