This sleepy river crossing on the Thailand-Myanmar border near the northwestern Thai town of Mae Sot is the only significant site where live cattle and buffalo from Myanmar are imported into Thailand.

120,000 head of cattle and buffalo walked across this shallow crossing into Thailand during 2014.

The simple fact is, the cattle movements across this peaceful river scene are so strategically important that they are one of the strongest single factors influencing the price of all live cattle trading across continental South East Asia and the southern border regions of China.

Any factor with this much impact on prices in the region will also have the capacity to affect the demand for, and therefore the price of, cattle in Australia. 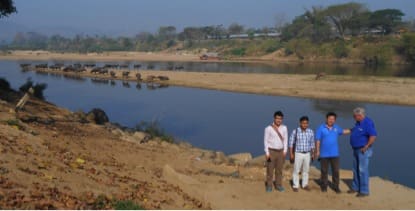 The Moei River is the border between Myanmar and Thailand in this area.
Thai quarantine officials, Vinai Suwanidcharoen and Shaun Coutts, Coopers Animal Health, NT.

This trade is jointly regulated by the ethnic rebel group, the Karen National Union (KNU) in southeastern Myanmar and the Thai Quarantine Department.

The sheds that can be seen on the top of the far (Myanmar) riverbank in the photo above are the quarantine facilities where all animals are inspected and vaccinated for Foot and Mouth Disease (FMD) on arrival.

The sheds hold about 1000 head with an all in – all out management system.

After 10 days on the Myanmar side, all of the stock are walked across the river and enter a similar facility on the Thai side where they are held for another 11 days.

On the 21st day in quarantine, every animal is individually inspected (see photo below) for physical signs of FMD (mainly blisters on the tongue). FMD blood testing also contributes to the disease screening during the quarantine period.

If the entire group is free of all clinical signs and the blood testing indicators are negative, then they are all released to move to the Mae Sot sale yard about five kilometres away.

There are three more similar pairs of joint quarantine facilities within a few kilometres of this location which, when combined, can deliver the current demand of about 2,500 head per week to the Mae Sot sale yard.

Local Thai livestock bring the weekly sale numbers up to about 3000 cattle and 1000 buffalo. 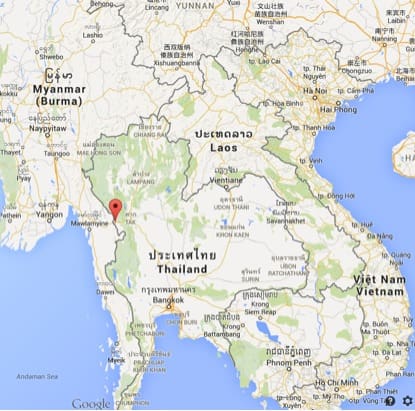 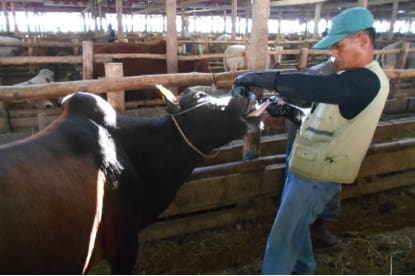 Final individual FMD tongue inspection in the Thai quarantine facility prior to release to the Mae Sot sale yard. Fortunately these cattle are very quiet and well behaved.

The general consensus from various sources is that Myanmar has about 14 million beef cattle with draft power being the main use for the cattle as the local Buddhists majority are not big beef eaters.

Many of the male cattle are castrated to improve their performance as draft oxen. This provides a large potential supply pool on the Myanmar side of the border which are legally banned from export by the national Myanmar government.

The eastern border region where cattle cross into Thailand is however controlled by the KNU who effectively operate as the local government authority facilitating the trade in live cattle while deriving an important source of operational revenue.

They even have their own “Department of Agriculture” working closely with the Thai officials.

My advice is that cattle inside Myanmar under the control of the national government are worth about 50 Baht per kg live weight because they cannot be legally exported.

Once they enter the Karen supply chain, which facilitates their quarantine and transit into Thailand, their value rises to 100 Baht (AUD$4) per kg by the time they clear quarantine on the Thai side. 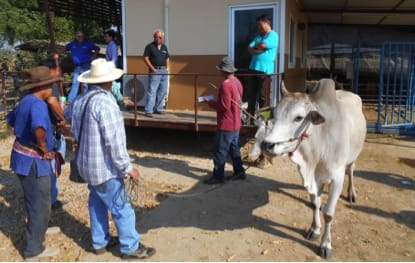 Mr Ra Wat from Loong Chow Farm, the largest feedlot in Thailand (black shirt) negotiating to buy the grey steer at the Mae Sot sale yard. The sale price agreed was 103 Baht per kg. The weight was then confirmed on the walk-on scales in the upper right of the picture. Cattle sold at Mae Sot are a mixture of feeders and fats. Guess 50/50.

About 40% of cattle and buffalo (which must be fat) are transported directly from the sale yard to the “Golden Triangle” Mekong River ports in the north of Thailand where they are shipped to south western China via the Mekong discharge ports upstream in northern Myanmar.

Another 40% are distributed throughout Thailand for a mixture of local consumption and fattening in local feedlots for later shipment into China via the same Mekong river route.

The remaining 20% are trucked across Thailand and into Vietnam via Laos (destination Hanoi) and Cambodia (destination Ho Chi Minh).

All cattle are halter led and individually cared for by their Myanmar stockman who is responsible for 8 to 10 head per man.

There is capacity to increase these export numbers substantially if that is required but the officials advise that will result in a rise in prices as more cattle transit the border.

As the current price is around AUD$4 per kg live weight at this remote western Thai border outpost and additional numbers will attract even higher prices, it would appear that Australian live cattle imports represent an attractive alternative source despite all of the associated shipping costs and ESCAS compliance requirements.

China has sucked so many live cattle out of continental South East Asia that the only remaining sources of significant numbers of live feeder and slaughter cattle in the broader region are overland from Myanmar via Mae Sot and from Australia by ship.

The fortunes of the cattle traders at this apparently insignificant river crossing are now inextricably linked to the live cattle trade from northern Australia.

Happily, the regional demand is so great that the numbers available from both Myanmar and Australia will never, ever be able to satisfy the collective needs of all of these interconnected customers.

The price of live cattle in Mae Sot will be one of the most important drivers of the price of cattle and beef for all of Asia and therefore Australia.

While technically, we are competing exporters, neither of our finite supply pools has the slightest chance of satisfying the growing regional demand.

We will always be unrelated but happy partners providing scarce supplies to a region which will constantly demand more cattle and beef from a limited supply base. 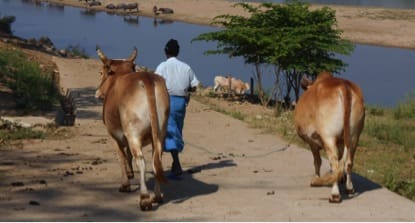 The Mae Sot cattle traders would be astonished to learn that the price of their cattle and buffalo as they wade through the river will be directly affected by the seasonal conditions in northern Australia and that they will experience a significant increase in prices when the rain finally comes to the drought stricken areas of Queensland and New South Wales causing the numbers flowing out of northern Australia suddenly contract.

It really is a small world.