For the Bahasa Indonesia version of this report click here

Slaughter cattle prices continued to increase during September with the indicator rate moving up to Rp43,000 per kg with a range of Rp41.5 to Rp44,000.

Even with a slightly weaker exchange rate, the AUD price has pushed through the $4 level for the first time since May 2017. Despite high levels of imports during July and August (60,000 and 70,000 respectively) the supply of cattle is still not sufficient to satisfy demand.

This situation is reinforced by the fact that there are still some feedlots selling short-fed cattle to keep their customers in beef.

September saw about 44,000 cattle imported into feedlots so the peak of supply is over and the market is expected to slowly reduce import numbers up until the end of the year as the bulge in recent imports works its way through the supply chains.

The graph prepared by MLA below shows that imports are up slightly when compared to this time last year.

It is interesting to note that at this time last year, slaughter steer prices and demand were weak (Rp40,000) and heading for even lower levels (see price graph above) while even with higher levels of imports this year, prices are higher and on the rise.

Certainly there are no other factors in the Indonesian market for fresh beef at the moment other than raw supply and demand so perhaps real demand for fresh beef is actually rising.

Could this be a general rise in consumption due to population growth and improved buying power or a switch back from Indian frozen buffalo to fresh beef? Or both?

Either way it is a very encouraging trend. 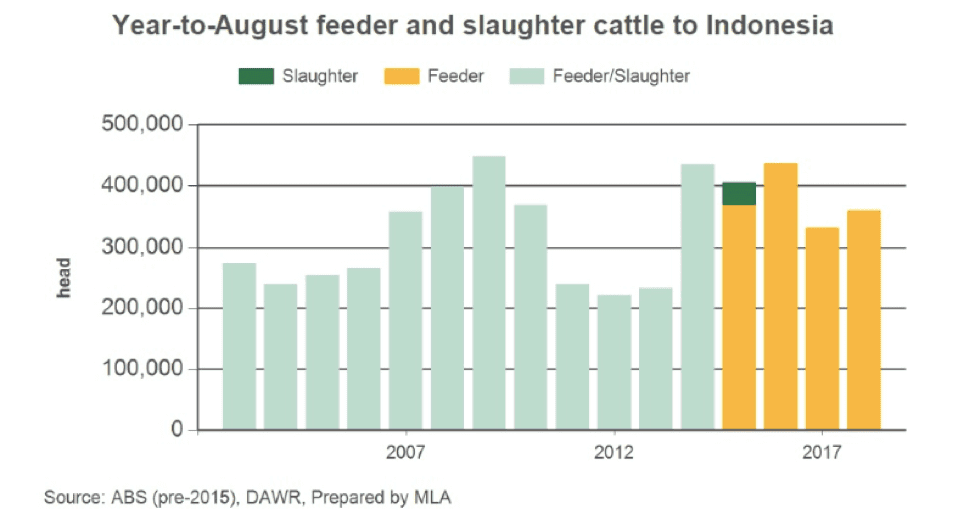 The Pasar Blimbing wet market in Malang, East Java where the prices at this modest stall were a little cheaper than other parts of Java with mixed cuts at Rp100,000 per kg and loin cuts at Rp110,000.

The Indonesia-Australia Comprehensive Economic Partnership Agreement (IA-CEPA) negotiations were formally concluded on the 31st of August 2018.

While a great deal was made about the benefits to the live export trade, the reality is a little more sobering.

Firstly, the agreement does not come into law until it has passed through the parliaments in both Australia and Indonesia and the timetable for this is optimistically estimated to be about one year. See notes from a press release below.

Knowing how activities in the Australian parliament don’t always go to plan or schedule, it could easily be 2021 before the deal is actually legally in place and any benefits begin to flow.

Under the agreement, the live cattle trade has been granted duty free status (down from 5pc) and a 575,000 import quota in year one with an annual increase of 4pc until the volume reaches 700,000 in year 6. While the 5pc tariff reduction is most welcome, there may not be any industry after January 2019 when importers are finally audited to determine their performance in respect to the Indonesian government 1 breeder to 5 feeder rule.

Importers were recently advised that failure to comply would result in the cancellation of their import permits for a period of 12 months.

As almost no importers will come even close to complying then it appears possible that the numbers of imports for 2019 could be approaching zero.

My experience in Indonesia tells me that this situation will be driven right to the wire at which time the pragmatic politicians, bureaucrats and importers will find a compromise position where the trade will be allowed to continue in some fashion.

“Although IA-CEPA is not far away from being signed, the actual deal will not take effect until both Governments have completed their domestic processes and transposed the agreement into law. As part of this process, enabling domestic legislation will need to be enacted by the Australian Parliament, which will include an inquiry by the Parliamentary Joint Standing Committee on Treaties, as well as changes to various regulations. Similar steps would occur in Indonesia which may take up to a year to finalise.” Bintang Supermarket in Seminyak Bali. This popular western style supermarket has a well presented beef cabinet with all product from locally slaughtered Bali cattle. Product quality appeared to be excellent. Beef from Bali cattle tastes exactly the same as meat from other breeds of cattle. Prices were similar to other supermarkets around Indonesia.

Prices are rising in Vietnam with rates in the north moving much more strongly than the south. 550kg Slaughter steers in the north were selling from Dong70,500 to Dong75,000 while similar cattle in the south were bringing Dong68,500.

I have averaged these figures to produce a September indicator rate of Dong70,000. Slaughter bulls and heifers have followed the trend of the steer rates in both north and south.

The stronger market has led to an increase in import levels by about 15% on last year with import totals to the end of August at 132,000 head. This increase has led to the feedlots now operating at about 60% of their capacity which represents a further increase over last month.

Feeder steer rates in Darwin are relatively steady at from AUD$3.00 to $3.05 which should encourage importers to continue their strong buying patterns.

Slaughter cattle rates have risen in both Beijing and Shanghai, a movement that was expected as a result of the African Swine Fever (ASF) outbreak. Beijing rates rose to Y27.4 in September while prices in Shanghai have moved from Y26 to Y28 per kg live weight for slaughter steers. These prices are for western breeds of cattle such as Simmental and Limousin crosses. The local native Yellow cattle attract a premium price of Y36 per kg or AUD$7.29 per kg live weight. Southern Yellow cattle are small, sturdy animals with good heat tolerance and parasite resistance. They have been used primarily for draft animals, but are now being selected for meat production, as well.

My agents advise that the ASF outbreak is gradually being brought under control with the rate of spread slowing down. China has about half the world’s pig population so the impact of disease control measures including travel restrictions on pigs and pig products in the infected areas has resulted in the price of pork increasing significantly. It appears that many supermarkets have taken this opportunity to reduce the price of beef in order to increase the rates of beef consumption despite the fact that the prices of local slaughter cattle has risen. I assume that the beef being offered at attractive prices is imported frozen product. 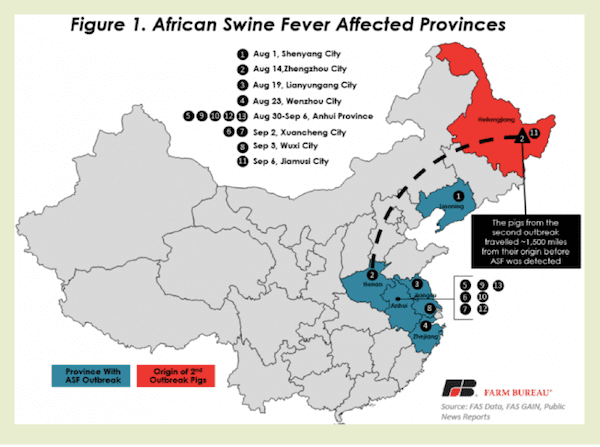 Map from Market Intel : showing outbreaks from the first on the 1st of August to 6th September 2018. The latest information I have suggests that there have been a total of 16 separate outbreaks up until the 16th of September.

The slaughter steer and beef prices remain firm with the general economy still surging ahead with rising employment, wages and consumption. 2019 may well see an increase in live cattle imports to the Philippines.

Prices have weakened slightly on last month with steers at THB92 and bulls at THB95. This may be an indication that cattle are once again flowing through the Myanmar border now that the flood waters in the east are receding.

I visited Scotland during September and naturally took the opportunity to call in to some butcher shops to see what they had to offer.

The shop in the photo below was owned and managed by John G. Renicks (in the photo) who happens to hold the title of “World Scotch Pie Champion 2012”.

I am a big pie fan so I tried his pies and they were excellent and well worth his award. Scots like their offal with Haggis still a firm local favourite. Haggis was traditionally prepared using the rumen of a sheep as the casing to hold the mixture of offal, oatmeal, spices, meat, onion and fat. Today these ingredients are enclosed by a large synthetic sausage skin.

Despite the fact that the description may not sound particularly attractive, the end product is outstanding and is in fact the Scottish national dish.