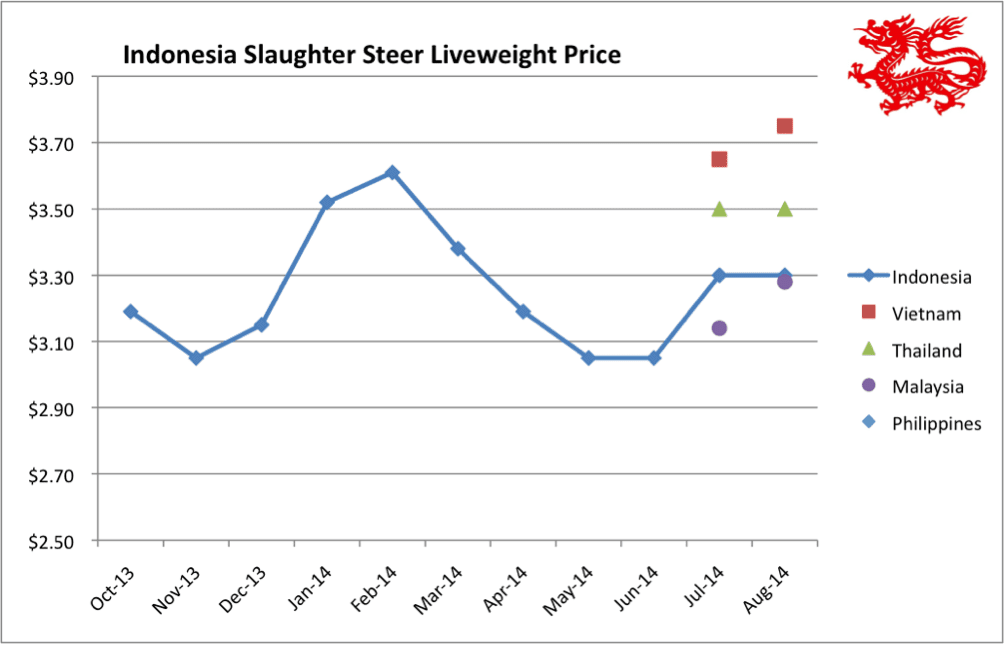 The August beef market in Indonesia has been notable because of its very unusual stability.

The absence of forces driving the market in new directions can probably be attributed to the transition period between governements.

The “caretaker” admininistration has not changed any significant policies for some months so business has been doing what it does best and importing the numbers it thinks it can sustainably sell into the market. The very orderly presidential election process certainly contributed to the general stability of the entire nation.

The construction of new abattoirs and small feedlots continues, raising the question of how many more cattle can Indonesia import to sustain this new capacity.

While there is little doubt that the domestic market can consume all of the product that they will produce, there is an equally clear understanding that the capacity of Australia to continue to supply increasing numbers of live cattle is seriously limited.

The “elephant in the room” that everyone prefers to ignore is the Indonesian breeder herd which continues its slide down the slippery slope.

This is probably the single most important livestock policy issue that the new administration must address. The “Kevin Rudd” $60 million, Red Meat and Cattle Partnership initiative has the potential to assist but has only just begun to get organised so it will be well into 2015 before we see any significant inputs from this project.

Interest in the importation of Australian live cattle keeps on growing with the number of importers and ESCAS approved facilities continuing to expand. When I asked an in-market person to give me a simple description of the market last week, the word they used was “gangbusters”.

Exporters are increasing their engagement with the market by providing higher levels of in-country support to importers and processors in the form of permanent staff and visiting consultants.

Live cattle prices have edged up a little with the AUD price rising about 10 cents during the month although this has only translated to a small rise in the wet market prices so far.

The large gathering of importers and exporters in Hanoi last month was futher evidence of the potential in this market for continued growth. Local cattle numbers are not significant while traditional supplies of Thai and Myanmar cattle coming into Vietnam via Cambodia and Laos continue to both shrink and become more expensive as Chinese agents generally offer a more lucrative destination.

On the down-side, diplomatic relations between China and Vietnam remain strained with the possibility of restrictions in the cross-border “grey route” for beef and livestock representing a very serious threat to the future expansion of this market.

No change in live cattle prices with fat steers for local consumption selling for AUD$3.50 while slaughter steers for live export to the north can achieve AUD$4.60.

One of the key determinants of Thai cattle prices is the volume of feeder cattle supplies arriving from Myanmar.

The majority of imports into Thailand from Myanmar arrive in the north western border town of Mae Sot. At this border crossing, cattle are quarantined and vaccinated twice for Foot and Mouth Disease before being released.

With the Thai national beef herd in serious decline, the volume of cattle supplies arriving from Myanmar is a key driver of prices in the entire region.

Cattle released from quarantine in Mae Sot end up as far away as Kuala Lumpur, Hanoi, Ho Chi Minh and Kunming. The photo below was taken last week in Mae Sot and shows a mixture of Myanmar and Thai cattle in a saleyard holding area. 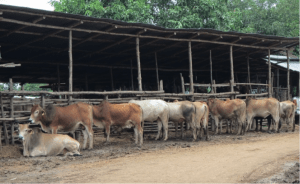 Thai and Myanmar cattle at a sale yard in Mae Sot, NW Thailand.

Prices in Malaysia were slightly firmer during August even though sales volumes have weakened following the festival month of Ramadan. Some butchers are only killing on the weekends. The small increase may be a result of the rising price of live Thai cattle which are currently selling for $4.10 per kg, up 10 cents in the last two weeks.

Thai cattle are the favoured item for the Muslim festival of Korban where male animals, mainly cattle, sheep and goats are slaughtered with the meat distributed to the poor.

Thai cattle can be led by their nose ropes which makes them easier to manage at the mosque where the majority of the slaughter takes place. Australian cattle are not available for this purpose due to the ESCAS regulations.

While Korban is not until October, traders like to stockpile animals in prominent locations where potential buyers can see them for the month leading up to the festival day.

Cattle prices remained steady during August with the big news in the market being a 5pc drop in the price of live pigs.

As this translates into lower prices for pork in the retail market it will put even more pressure on the beef price which is already the lowest in Asia.

The Philippines is in danger of disappearing completely from the Australian live cattle customer list when the season breaks in Australia and prices spike.

Anyone looking for the Philippines price point on the graph at the top wont find it because it is so low, it’s off the bottom of the chart.

The recently announced health protocol for feeder and slaughter cattle exports from Australia will provide Cambodia with a fresh supply of cattle to service the main market in the capital which is currently slaughtering up to 600 head per day.

The cattle slaughtered in Phnom Penh tend to be the lesser quality animals while the better types are exported to Vietnam. Local feedlots are relatively basic and feed resources are not as plentiful as some of our other Asian customers so slaughter cattle will probably be the preferred item to begin the trade.

Even though this cost structure looks as though it should deliver good profits to the importers, the administrative costs of importing through the port of Sihanoukville are extremely high.

With shipping costs to Cambodia similar to those of the Philippines, the capacity for Cambodia to pay more for our cattle will put further pressure on supplies available for the Philippines.

The new Darwin abattoir is also likely to be adversely affected by this new and potentially higher priced market for slaughter cattle.

A new 1000 head beef feedlot company has recently been established near the city of Hohhot which is the capital of the Inner Mongolian Autonomous region in North China.

At the moment they are fattening local bulls sourced from the traditional beef cattle breeding areas of the north west and have big plans for expansion. (See photo below)

These animals are fed to a target weight of between 600-700 kg and sold for a similar price per kg as the feeders.

Using an exchange rate of 5.74 RMB to AUD$1, this means that these feeders are selling for the equivalent of AUD$6.97 per kg live weight.

Consider the margins they could make if they imported high performing Aussie feeders for AUD$5 per kg live weight.

Simmental bulls in the feedlot near Hohhot, North China.