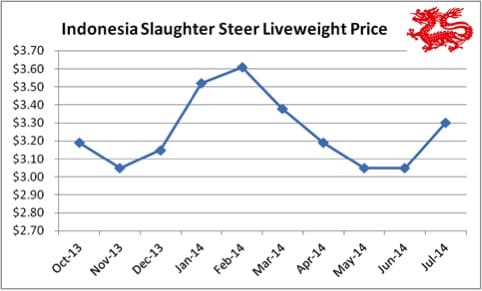 Ramadan had its traditional affect of causing prices to spike at the end of the fasting month. Importers were finally able to unload their overcrowded feedlots at the same time as achieving improved prices. Live slaughter cattle prices for the Jakarta market began the month at around AUD$3.00 rising to $3.30 by the end of the month. These rises could have been greater if the feedlotters were not holding such large inventories. Prices were up to $3.50 in north Sumatera where cattle feedlot capacities were at more normal levels.

The real winners during the Ramadan price spike were the wholesale and retail butchers who were able to put retail beef prices up from about $8.70 per kg at the beginning of the month to as high as $12.40 at the end during the festival peak.

Forecasts for the remainder of the year remain foggy as government policies relating to cattle and beef imports won’t be known until the presidential and ministerial appointments are resolved. It could be another 3-4 months before the new Minister officially announces import policies.

The volume of box beef supplies remaining in storage and on the water continues to be a mystery resulting in another unknown factor potentially affecting the supply side of the market.

Local cattle numbers were noticeably down at abattoirs throughout Sumatera during Ramadan. This may have been because imported cattle were plentiful and at a lower price but local opinion suggests that it is also a function of the domestic herd continuing its rapid decline.

New feedlots and abattoirs continue to be developed at the same time as existing importers expand their abattoir supply chains to facilitate the current open permit policy. If this policy remains the same with the new government then the critical factor for the trade is likely to become the capacity of Australia to supply customers requirements.  A good wet season in Queensland and the NT should be the trigger to take northern Australian cattle prices to highs not seen for decades.

I am writing this report in Vietnam where the import business continues to expand at speed. Exporters are very active here either supporting their existing customers or assisting new customers to develop their ESCAS supply chains. Yet more exporters are actively planning to enter the market.

Prices remain strong at around AUD$3.65 per kg for slaughter steers (Hanoi area) which is the highest domestic slaughter price for any of our S. E. Asian customers.

The Vietnamese beef market has many different driving forces when compared to our other customers :-

During this trip I have appointed two new agents in Vietnam to provide market reports in Hanoi and Ho Chi Minh so accurate information should begin to flow once again.

Last week I visited northern Thailand where I watched live cattle being loaded onto boats for a two-day journey up the Mekong River to Myanmar. My previous report that cattle were shipped up river on barges to China was not correct. They are in fact exported quite legally by riverboats to Myanmar. See photo below. After discharge and resting on the Myanmar side of the Chinese border they are then trucked across into China – another not so legal “grey route”.

The urgency for Thailand to open its doors to imports of feeder cattle from Australia may not be as great as I have previously reported. The main reason for this is the relatively consistent flow of live cattle coming out of Myanmar. These animals are legally imported at a number of locations along the border followed by a 21-day government supervised quarantine period during which all cattle are vaccinated twice for Foot and Mouth disease. After release from quarantine these cattle are fattened in Thai feedlots before being sold either into the local slaughter market or north to live exports. The capacity for this significant flow of cattle (and other livestock) to continue appears quite secure.  This complex issue of a potentially endless cattle supply via Myanmar is the subject of another story. 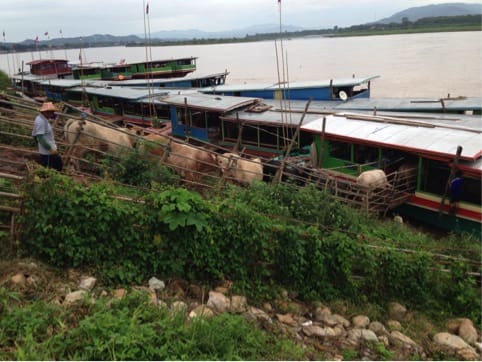 Cattle being loaded from northern Thailand for live export to Myanmar.

This month a new agent has been engaged to provide monthly market information from peninsular Malaysia.

This market is quite a mature one with a relatively small population of keen meat eaters favoured by high net incomes. The result is a very high level of per capita consumption of the full range of meat products. High incomes and a broad ethnic diversity ensures that there are a large number of viable market segments across all levels of species, quality and price.

Malaysia was one of the pioneers of live cattle imports with large numbers being shipped from northern Australia to all parts of Malaysia in the 70’s and 80’s. Towards the end of this period, reduced government subsidies, higher volumes of Indian beef and ample supplies of very cheap live imports from Thailand resulted in the end of the trade.

While cheap Indian buffalo beef is still in plentiful supply throughout Malaysia, the traditional preference for freshly killed “hot” meat from the wet markets is once again increasing live imports from Australia. At the same time, live cattle from Myanmar (via Thailand) have become even more expensive than Australian imports.

No significant changes in the market once again with the main theme reported from the agent that the population seems to continue with an up-beat mood with stable government policies leading to stable food prices.

The Philippines consumer pays the lowest price by far amongst all our S E Asian live cattle customers as a result of low average incomes, extreme price sensitivity and highly competitive pork prices. The majority of live exports to the Philippines are cull cows and bulls hence the relatively low prices.