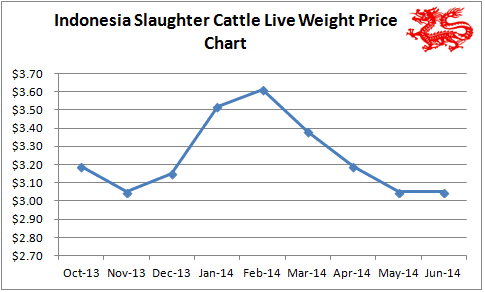 The live cattle price collapse has finally hit the bottom. While feedlots generally remain quite full, the commencement of Ramadan on June 28 has given hope to importers that strong demand is only a few weeks away. The Ramadan consumption pattern is complex in that while this is the fasting month, Muslims tend to spend a lot more on food after their fast is broken each day at about 6 o’clock in the evening. This expenditure increases to quite high levels in the last two weeks of Ramadan followed by major celebrations for Lebaran which is the annual holiday equivalent to our Christmas. During this three week window, consumption increases dramatically and prices of almost everything reach their annual peak.

The destruction of the national cattle herd is further confirmed by the opening up of official feeder cattle imports into the province of East Java, traditionally the powerhouse of Indonesian cattle production. Two major feedlotters now have permits to send Australian feeder cattle into this region although the government still imposes restrictions with a maximum 500 head per permit allocation while cattle can only be sourced from stock which have already been imported into West Java.

Q 3 import permit numbers have finally been advised at 167,000 head but importers are still unsure of their plans for the future. The main reason for this is that regardless of the outcome of the Presidential elections on July 9, nobody knows exactly what the policy of the new President and his government will be. Both candidates have generally nationalistic policies with only a few vague statements about the livestock industries to provide any guidance for future planning. Add to this the subsequent coalition horse-trading and the reshuffling of the senior bureaucracy and it may be that the new government’s policy position in relation to cattle imports will not be clear until sometime in Q 4.

The unpredictable box beef market adds a further unknown to the beef price equation as it is simply impossible to predict how much meat is in cold stores, when it will be released and at what price.

Official Thai government figures suggest that the national cattle herd is in the order of 6 million head while well informed industry sources confidently claim that it is between 1.5 and 2 million, representing a dramatic reduction over the past 5 years.

Large outflows of live slaughter cattle continue with destinations in both China and Vietnam.

From the northeastern Thai river port city of Chiang Rai, traders continue to ship about 10,000 live cattle per month on barges up-river to the Chinese provincial city of Xishuangbanna on the Mekong (see map below). Thai cattle also cross the Mekong river at Nong Khai to Vientiane in Laos where they are trucked onwards by road to either China (Xishuangbanna) or Vietnam (Hanoi). Sources suggest that this road trade accounts for about 12,000 head per month. The price differential is dramatic with farm gate prices for slaughter stock in the Bangkok area of AUD$3.50 per kg while the price delivered to the northern border at Nong Khai is AUD $4.60.

Domestic supplies for southern Thailand are supplemented by imports from Myanmar but these cattle continue to be harder to source with strong competition from Chinese buyers operating inside Myanmar.

Australian live-export companies are already active in Thailand, visiting potential customers in preparation for the opening of the feeder cattle trade. 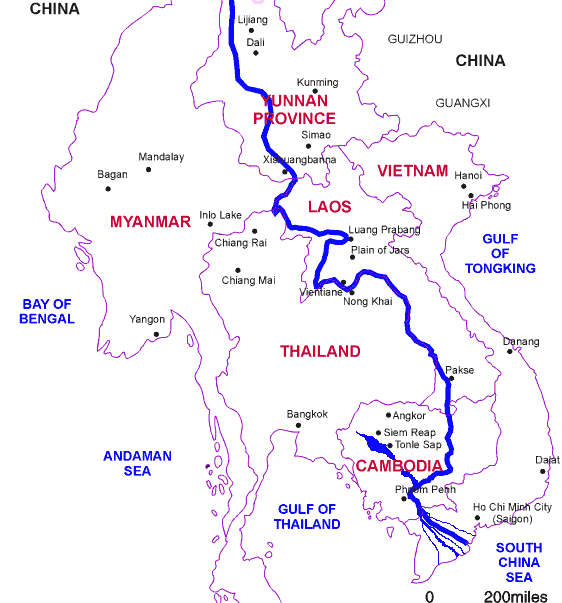 Map: The path of the Mekong river from China to Vietnam.

No significant changes in the market this month. I am writing this report from the Philippines this week and visited a local supermarket to view the meat offerings. When you ask a local what meat they prefer if there is no price differential they almost all say that they prefer pork first, then beef then chicken. In one supermarket shelf there was a large presentation of chicken, pork and beef side by side. Any mum with limited spending power would buy pork every time as it is cheaper than beef by at least 20%. If things are a bit tight then chicken wins the day at half price again.

Another one of Australia’s livestock exporters is about to enter the market to service a newly established importer so business continues to expand in this market.

The largest exporter to Vietnam has installed CCTV cameras in every one of their many slaughter facilities.

The disputes between China and Vietnam over offshore islands continue with potential to seriously disrupt the cross-boarder grey channel trade in beef and livestock.

I recently met with a Cambodian farmer group when they visited Indonesia to learn how imported Australian feeder and breeder cattle are managed under intensive, high rainfall conditions. More than 80pc of Cambodia’s 15 million people are small farmers with rice as their main crop. Cattle play an important role providing draft power and income from the sale of surplus stock. In recent years, strong demand from Vietnam and rising domestic demand has reduced herd numbers to the point where some corporate farmers are looking to import both breeders and feeders. In the first instance these animals are being supplied from Thailand. Live slaughter cattle prices of close to AUD$4 per kg live weight are resulting in a very high kill rate for the local herd. Slaughter weights are down to an average of close to 300 kg live weight as a result of a combination of poor genetics and strong demand. 600 head of local cattle are slaughtered every night in the capital Phnom Pen.

Wet market beef prices are around AUD$8 per kg and double this figure in the supermarket.

Snapshots from Singapore and Beijing

I visited Singapore last week and my daughter was in Beijing so here are some one-off reports on retail beef.

Singapore removed all livestock industries from the island about 20 years ago so everything is imported including beef which is primarily sourced from Australia and New Zealand. The “wet” markets are more like smart farmers markets and the prices are virtually the same as supermarket rates. Rib Eye @ AUD$27 per kg with Rump @ AUD $15.40.

The presentation of locally slaughtered product in a mid-level Beijing supermarket was of a much lower standard than Singapore while their prices are also a little lower. Rib Eye @ AUD$20 with Rump @ $13.

These figures are converted to AUD$ from their respective currencies which are changing every day so the actual prices here are corrupted slightly by foreign exchange fluctuations. The AUD$ figures presented below should be regarded as reliable trends rather than exact individual prices.