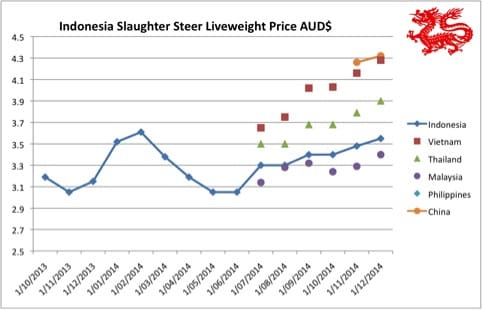 Retail meat prices have firmed slightly during the Christmas/New Year holiday season, although these modest increases have not been passed back to importers.

The slaughter steer price (above) is a little higher than last month, only as a result of weakening of the AUD against the Rupiah.

This price is also averaged between the two major pricing centres of Jakarta ($3.44) and Medan, North Sumatera ($3.74) with the latter having live cattle prices at almost 10pc higher than Jakarta.

Indonesians love public holidays with national days off for Christmas Day, New Years Day and the Birthday of the Prophet Muhammed (3rd January).

As at the time of writing (January 11) Indonesia’s Department of Trade has still not released the first Quarter permit allocations.

Rumours are flying in all directions about what the outcome will be with the general consensus being a similar number to last year at around 130,000 head.

Other commentators are tipping that some importers who failed to utilise the 80pc minimum of their 2014 permit allocation may be penalised with drastically reduced permit numbers. Further rumours from the box beef importers suggest that there may be significant reductions in permits for secondary cuts of beef and offals.

Some supermarkets have begun to react to these rumours by stocking up with locally produced product.

Slaughter cattle which originated from Australia are still banned from entry to East Java. As a result, the local slaughter cattle prices have climbed to Rp42,000 per kg or AUD$4.13 per kg live weight.

Both importers and exporters will be in very difficult positions when the season does open as importers wont be too keen to buy the very expensive wet season Australian feeders, while the exporters will be doing everything they can to keep their ships moving to avoid heavy demurrage penalties.

The most likely approach will be for exporters to try to find new customers outside Indonesia and divert vessels to them instead of having long-term charter vessels dropping anchor in Darwin harbour.

Government and Industry members of the Breeding Cattle Working Group, Indonesia-Australia Partnership on Food Security in the Red Meat and Cattle Sector met in Jakarta at the end of November. The group visited a number of cattle breeding project sites as part of their assessment of which projects would be funded using some of the $60 million allocated by Prime Minister Rudd in July 2013.

I visited a palm plantation in East Kalimantan (near Balikpapan) in mid December (see photo below) where local farmers are financed into ownership of Bali cattle which are grazed under oil palm trees in a state owned palm plantation. This is a very successful local government initiative with close to 6000 Bali cattle grazing within the 6500 hectare plantation. About half the cattle graze full time while the other half return to the farmers homes each night. The result is an increasing Bali cattle population and greater wealth for low-income farmers.

This project will be expanded during 2015 with an importation of breeders from northern Australia as numbers of Bali cattle are not sufficient to keep the expansion going at the required pace. Domestic prices remain steady while the Vietnamese Dong has continued to strengthen against the AUD.

Local fuel prices have declined by 12pc during December providing a significant boost to individual spending power at the same time as reducing one of the important cost contributors for imported cattle and beef products.

A strong economy combined with lower fuel prices and virtually nil imports of live cattle from the traditional suppliers in Laos and Cambodia auger well for the continued growth of the Vietnamese live cattle trade for 2015.

Thai importers are busy with ESCAS audits of the first supply chain for imported Australian cattle with two more in the process of upgrading.

With imports from Myanmar and exports to China continuing at a steady pace (about 15,000 per month), Thai abattoir operators are investigating their options for slaughtering Australian cattle and re-exporting the beef to China.

The Thai Department of Livestock Development is considering the possibilities of a cow-calf and backgrounding operation in Myanmar with young stock imported into Thailand as another means of addressing their domestic cattle shortages at the same time as reducing disease introduction risks.

Once again, little change in the Malaysian market with the slight price increase resulting from currency fluctuations only. The floods, which hit the East coast of Malaysia this month, have had a significant affect on chicken prices but none on rates for cattle and beef.

The optimism continues in the Philippines with a small but significant rise in prices for cattle and beef as well as a strengthening of the Filipino Peso.

The Philippines has had a rare year of good fortune with no major natural disasters combined with strong and steady economic growth.

Large numbers of guest workers continue to repatriate US$ into the domestic economy while farmers have had a run of kind seasons and good harvests.

Add the Christmas holidays and lower fuel prices to this and the Philippines ends 2014 with the brightest outlook for many years.

No change in the reported prices with a weakening AUD against the Renminbi (about 2pc during December) accounting for the increase in slaughter cattle prices since last month.

Unofficial reports suggest that the herd has been declining over the past few years as smaller, less efficient farmers leave the industry which is experiencing a reduction in raw milk prices.

12 million dairy cows might be expected to produce approximately 20pc culls per year or about 2.4 million head. Combine this with say four million male calves suitable for the feedlot and the contribution that the dairy industry makes to China’s national beef supply is quite significant.