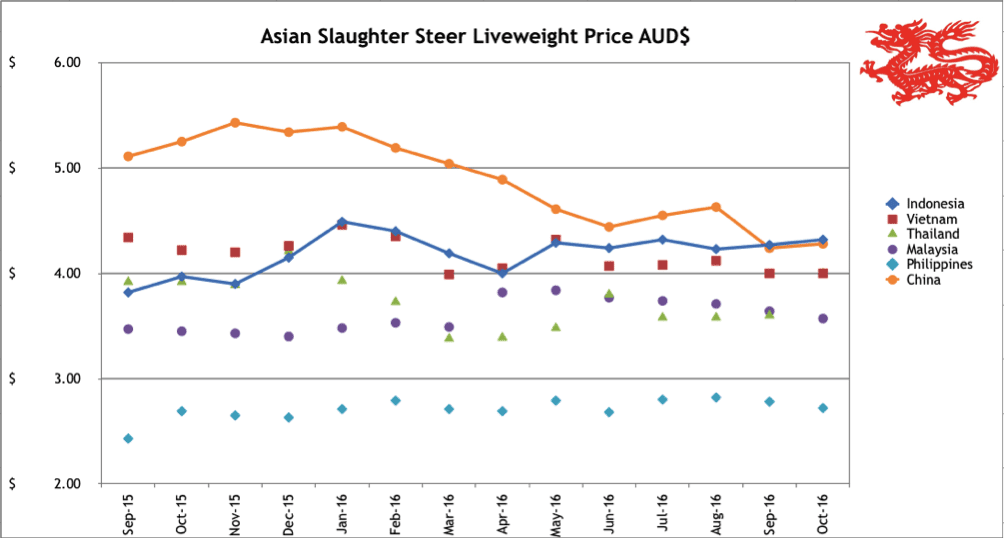 Live slaughter cattle prices have firmed a little to Rp43,000 per kg as feedlot inventories continue to dwindle.

It will be interesting to watch the tug of war between raw supply and demand and the wishes of the Government of Indonesia as feedlot supplies gradually dry up towards the end of December.

The long running dispute between the government and importers regarding mandatory breeder imports has meant that an insignificant number of feeder cattle were imported into Indonesia during September and October.

With most importers only getting their T3 permits around the first week of November, this means that their first shipments are unlikely to arrive until late November. The result will be a very large hole in domestic fresh beef supplies in January/February at least.

The Minister of Trade has won his battle with live cattle importers who have virtually all agreed to his demands to import 1 breeding female for every 5 feeder cattle.

Essentially importers were refused import permits for feeder cattle until they agreed to the breeder requirement.

This represents financial disaster for importers who largely have no resources or experience for the efficient management of large numbers of breeding cattle.

The winning stroke by the Minister was to delay the performance audit of breeding cattle imports until the end of 2018.

From the importers’ perspective it must have seemed like an easy choice – don’t sign and go broke now, or sign up and go broke some time after the beginning of 2019.

The practical implications of this “plan” are daunting to say the least. Assuming a normal import season of say 600,000 feeders, this would mean that the mandatory, matching breeder imports must total 120,000 head, i.e. simply impossible.

In the event that Indian beef does result in the halving of Australian cattle imports to say 300,000 in 2017 then the breeder requirement for this period would be 60,000 which is equally impossible from both a pure supply perspective as well as a wide range of practical logistics considerations.

In a further initiative to increase cattle and beef production in Indonesia, the Ministry of Agriculture has announced the “Special Acceleration Program in Increasing Pregnant Cattle and Buffalo Population / Mandatory Pregnancy program (Upsus Siwab).”

The key feature of this project is that the government will provide 4 million doses of beef cattle semen free of charge to encourage farmers to mate their cows and get more calves.

As a second phase to this breeder boosting initiative, the Minister has also announced that if the cow fails to become pregnant then it can be eligible to be utilized as a feeder/slaughter animal and enter the beef production supply chain.

The government estimates that these shrewd initiatives, announced on the 10th and 11th of October, will result in an increase in new pregnancies to 1.4 million head in 2016 and 3 million head by 2017. No time to lose! Cattle producers in Australia will be watching this very clever project with great interest as they also need to increase their breeder herd as quickly as possible following the disastrous three year drought. Why didn’t they think of such a cracking idea?

Buffalo beef is beginning to make its mark around West Java where it is now a common sight in many of the larger wet markets of Jakarta and Bandung.

Traders report that sales are good and they are happy with the new business. The expectation that domestic customers would reject frozen product in the wet market does not appear to be as serious as originally predicted.

What is much harder to quantify is the impact on the bakso ball market because the meat for these products is purchased wholesale with no way of determining just how much frozen Indian buffalo has displaced traditional supplies of fresh and frozen product. One experienced industry observer told me that the total cold storage space in Indonesia is in the order of 350,000 tons.

This includes space for meat, dairy, fish and a wide range of other perishable products.

With the government announcing that it intends to import about 100,000 tons before the end of the year, the question arises, is there enough space to store this product between importation and sale?

If the capacity of the cold stores (chilled and frozen) is say 350,000 then it would be fair to assume that this amount of very expensive infrastructure would not be constructed and managed with a spare capacity for an additional 100,000 tons of new frozen product business.

Obviously, this amount of product doesn’t arrive all on the one day and some may be sold before the later consignments arrive. Indian buffalo will also displace other beef imports that will no longer arrive so that space will also become available.

No change since last month in slaughter cattle prices (indicator price Dong 68,000 per kg live) although this is unlikely to continue for much longer as numbers of Australian cattle begin to dry up in Vietnamese feedlots.

This month, even more and larger importers have been excluded from access to Australian cattle as a result of restrictions by the Australian government.

Importers who have been found to have breached their ESCAS supply chain obligations can have their cattle supplies cut off by the Australian Department of Agriculture refusing to provide export permits for traders to supply these specific importing companies.

The number of Vietnamese companies that have been blocked from receiving Australian cattle has been steadily growing over the last three months.

As the time-lag for feedlots to process their stock and send them to slaughter is often 3 to 5 months, Vietnamese consumers can expect to see a significant reduction in slaughter cattle exiting feedlots from about January onwards.

And there is more bad news for Vietnam as a result of the “resolution” of the import permit stand off in Indonesia.

Now that Australian exporters have the ability to supply to both Vietnam and Indonesia, the capacity for Vietnamese importers to hold their CIF prices down because they were the only possible destination has largely vanished.

When this factor is combined with the ending of the majority of long term shipping charter contracts, exporters are finally in a position to offer to do business with their potential importing customers on a purely commercial basis. i.e. if there isn’t a satisfactory margin in the deal then they are no longer obliged to do it.

There is a small but significant positive for both exporters and importers in this context as shipping companies are suddenly obliged to charge freight rates which reflect real supply and demand in the market place.

With the reduction of flows of cattle into Vietnam as above and the modest import permit quota into Indonesia for T3 coming at the same time as long term charters have generally ended, shipping space has suddenly become the only seriously over-supplied factor in the complex live export equation so rates are tumbling.

With Aussie CIF prices remaining high and ESCAS restrictions on inflows of cattle regardless of the price, the stage is set for live cattle to enter the market from new sources.

If the CIF price from Australia rises by about 50 US cents per kg live weight from the steady rates of the last 2 years, as some traders predict, then the sums will begin to add up for imports from South America or Mexico or both.

I would not be the slightest bit surprised to see Mexican or South American slaughter cattle in Vietnam abattoirs within the next six months.

Thailand will also become a beneficiary of this sudden price rise from Australia as they have recently been about 20 cents per kg more expensive so have only been in demand from those Vietnamese processors who did not have access to Australian ESCAS supply chains.

If the price goes up by the predicted 50 cents this will mean that Thai (and Burmese) cattle will be available at a 30 cent discount from today’s rates or more likely, Thai traders will be able to increase their price and numbers by up to 30 cents and still only match the new CIF rates.

Those cattle that can be exported to Vietnam and China are achieving Baht105 – 115 per kg while those treated with Beta-agonists are restricted from export to China and these are bringing 85 to 88 Baht per kg live weight from domestic butchers.

As noted above, when the numbers of Australian cattle start to shrink in Vietnamese feedlots, the price of Thai/Burmese exports to both north and south Vietnam is likely to rise sharply.

The Malaysian exchange rate continues to slip while the live cattle price remains steady. Frozen Indian buffalo beef remains plentiful in both wet and supermarkets at RM18 and RM20 per kg respectively. These convert to AUD $5.75 or Rp57,500 per kg for the wet market which is quite a bit cheaper than the government price of Rp65,000 in Indonesia.

Prices for live cattle in the Peso were stable during the month of October.

The second week in October in the Philippines was “Meat Consciousness Week”.

During this week the government focuses on meat safety issues and the presentation of clean product in public markets.

Government agencies are cracking down on unsanitary market conditions and promoting the use of Accredited (refrigerated) Meat Vans. “It’s all about temperature” is the slogan used by the regulatory authorities.

Beef prices in both wet and supermarkets are edging up slightly following the trend of recent months.

Live cattle prices have stabilised with similar rates reported this month as last month. The increase in the AUD price above is purely a currency effect.

My agents are reporting very low prices once again for Brazilian and Argentine beef priced as low as Y39.6 or about 1/3 of the normal market rate. They also advise that the quality of the product appears poor with significant drip of bloody fluids into the vacuum packaging.

In response to a question about the change in demand for beef considering the general economic slow-down, the following was the response from my agent in northern China :-

“Even though the economic growth rate has slowed down, the demand for beef is still very strong. The Chinese domestic herd of beef cattle is continuing to decline, however, the medium and large-scaled cattle farms (> 50 cattles) increased year after year. As you know, even though China now has a protocol with Australia for importation of live cattle there have been no significant numbers imported. The reason maybe attribute to the preference for beef importation but not live cattles, as the feeding cost so high in China. In addition, there are more and more countries and regions (Australia, Brazil, Canada, New Zealand and Uruguay) imported their beef to China, the low price would be the priority selection for importation.”

I have also just been provided with the figures below from a recent official Chinese statistical update :-

I was visiting Brunei last week and took these photographs of beef in one of the rural supermarkets.

The majority of cattle slaughtered in Brunei are sourced from Australia.

The Brunei dollar is locked to the Singapore currency so $1 Brunei is equivalent to AUD$0.92 cents at today’s rate. Buffalo beef which in this case appears to be fresh.