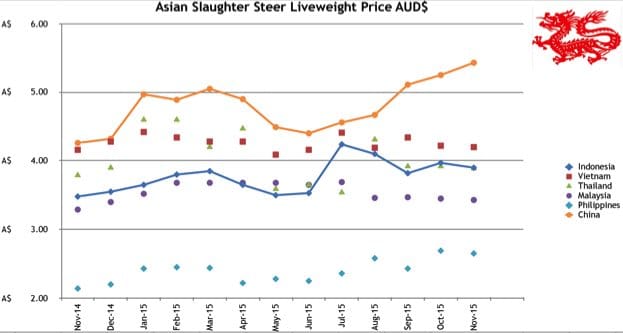 No joy at all for Indonesian importers during November as the retail demand for beef remains stagnant. While retail prices remain relatively high they disguise the real situation which is very weak buyer interest and very low product flows.

As of the first week of December about 160,000 head of feeders had been imported from the Q4 total permit allocation of 200,000. All of these cattle have been purchased in Australia at extremely high prices leaving feedlotters wondering what they need to do to force prices up.

In the past, domestic demand backed off following retail price increases but after a wait of about 2 to 4 months demand returned and consumers paid the new higher prices. After the traditional price spike at the end of Ramadan and Lebaran (Rp42,000+) during late July this year, live cattle prices eased downwards and remained at a relatively low figure of about Rp38 – 39,000 per kg. Everyone expected that this would lead to a steady rise in consumer demand but retail buyers have stayed away and butcher volumes have collapsed at both the wet and supermarkets. Admittedly, retail prices have not reduced to the same degree as the live slaughter cattle prices giving butchers a better margin but prices are still at “reasonable” levels historically and still failing to attract customers back to beef.

The only real twist this month is that prices in North Sumatera are now cheaper than Jakarta rates, a puzzling reversal of the usual position.

Just to confuse the rationale for retail pricing further, the very high-end beef sales appear to be the only hot area of consumer demand. Last month I had a craving for a good rib eye on the BBQ and visited my local meat shop/restaurant combination on the outskirts of Jakarta. I very reluctantly paid AUD$72.50 per kg for a 250 gram steak. In the same display cabinet were large quantities of other high priced products which seemed to be walking out the door and onto plates in the restaurant which was almost full during my visit. I don’t think I will ever have the beef cravings to the extent where I will pay AUD$160.00 per kg for Wagyu tenderloin or AUD $95.00 for lamb chops! – see photos below. I love lamb chops but not enough to pay $95 per kg.

About 6 months ago the Indonesian government allocated large sums of money for provinces to purchase breeding cattle (Australia is the only option for supply).

The first shipment has been delivered to Balikpapan in East Kalimantan during November with further shipments planned for Lampung and elsewhere in the new year. This project is initially for distribution of breeders to small holders as a combination social project in low-income rural areas as well as boosting numbers in the national beef herd. The government hopes that once the small holders achieve good results that this will encourage larger industry players to continue the process through commercial imports. The best options for breeder imports are through integration with palm oil plantations.

This new focus on breeders is occurring all across SE Asia with the governments in Thailand, Cambodia, Laos, Malaysia and Vietnam all providing a range of incentives to encourage private enterprise to import breeding cattle.

Given the very low herd numbers in all of these countries, it heralds the beginning of a whole new trade for breeders which will build over the coming years into a business that will marry up very nicely with the feeder and slaughter cattle trade.

The Ho Chi Minh price remains around 68,000 Dong with discounting becoming much less, suggesting that the market is sorting itself out and panic selling at any cost is largely over.

The Hanoi price continues to hold at around 71,000 D. While the pressure of oversupply remains the main feature of the market, importers appear to have resolved themselves to working through the backlog in a more orderly fashion. With larger numbers of feeders being diverted to Indonesia to fill the expanded Q4 permit allocation, reduced numbers entering Vietnam will be giving importers comfort that oversupply will work itself through in the not too distant future.

During a visit to Vietnam last week I was fortunate enough to visit one of the larger feedlotters near HCM City. The feedlot that I visited demonstrated that the Vietnamese have made exceptional progress since the trade began in earnest. The Vietnamese feedlotters, after only 3 years of feeding serious numbers of Australian cattle have reached a point that took the Indonesian industry about 10 to 15 years to achieve (as an average). Given the need to continually improve their performance to keep up with commercial pressures, I expect that the better Vietnamese operations will catch up with the best Indonesian feedlot performance in 3 to 5 years time.

As a result of the collapse in numbers of the regional cattle herd in continental S.E. Asia and the constant disruptions to flows resulting from Foot and Mouth Disease and other issues, traditional live cattle supplies from Myanmar and Thailand via Cambodia and Laos can never hope to develop the capacity to consistently supply volumes of live cattle needed to provide the product required by the Vietnamese domestic beef market. Even if South American feeder cattle are imported (and this seems a long way off yet), the difficult logistics with this supply line will restrict numbers to well below what is needed for domestic demand so Australia looks set for a very long term supply relationship with Vietnam.

While many aspects of Vietnamese life are racing to catch up with the west, there are still some traditional uses for cattle which are retained because they suit certain tasks like delivering heavy loads in tight spots where trucks can’t operate. See below two photos taken by George Black who works for Elders in Vietnam. Photos by George Black: Two bulls pulling about a ton of dirt. Dumped the load and not a hydraulic line in site.

The Thai cattle market is weakening with reductions in the flow of live cattle exports to China. My sources advise that the Chinese buyers are becoming more particular about what cattle they buy and are tending to buy direct from the better farmers to ensure that they get the cattle quality they want and a disease free status they can rely on. This reduction in total export numbers has forced some cattle prepared for China back onto the domestic and Vietnam export routes resulting in an overall weakening in average prices.

The South American import option is looking like a very long shot at the moment and will take some years to evolve given current re-export options and pricing structures.

The next sales of live cattle from Australia to Thailand are more likely to be breeders than feeders.

Once again, little change in Malaysia except for a continuing weakness of their currency. Retail frozen Indian buffalo beef continues to sell for about 50% of the price of other beef products.

I passed through Johor Baru last week (Malaysia’s southern city adjoining Singapore across the causeway) and observed some spectacular construction under way. I was advised that this enormous building site, less than half of which is shown in the photo below, is a Chinese investment constructed on land 100% reclaimed from the sea. Surely the new high-end tenants in this complex will consume a lot of beef. This photo shows only a small part of this massive retail, commercial and residential development constructed on reclaimed oceanfront.

Happy days continue in the Philippines with beef prices rising slightly in both the wet and supermarkets. My reporter continues to marvel at the positive atmosphere in the country with good seasons, low fuel prices and an extended absence of natural disasters. Food, jobs and cash are more plentiful than usual and the locals are making the most of it.

Live slaughter cattle prices have reached 25Y for the first time since I began reporting from China 12 months ago. In November 2014 the Beijing price was 24Y while the Shanghai price was 18Y. Today’s rates are 25Y and 17.5 respectively. Retail prices in the wet and supermarkets have also risen slightly to keep them above prices reported 12 months ago. This limited information combined with the general background information coming out of China of a slowing economy leading to a slow reduction of legal imports combined with a selective crackdown on illegal imports (live and processed) could mean that demand in China has once again outstripped supply.