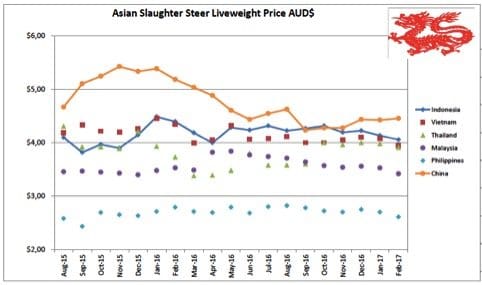 Live slaughter prices appear to have reached their bottom and turned north with average rates for February edging up a fraction to around the Rp41,500 per kg live weight.

There also appears to be a general sentiment that the “new” supply and demand equation which includes Indian beef has reached a point where the instability caused by Indian supply has now been factored into the market (after capturing about 50pc of the business) and is no longer a disrupter to current day to day trading.

The price of $4.06 above is a little misleading as the Aussie $ has risen so quickly during February that it has made the Indonesian price appear to be on the slide again rather than the reverse.

The most significant news of the month has been Indonesia’s Constitutional Court ruling that Indian buffalo beef imports must stop as they were breaking the law that stipulates that imports can only occur from countries or zones that are officially free from Foot and Mouth Disease (FMD) as certified by the OIE.

Indian buffalo beef does not comply with these requirements as OIE does not recognise any zones of FMD freedom anywhere in India. This information is freely available on the internet at : http://www.oie.int/animal-health-in-the-world/official-disease-status/fmd/list-of-fmd-free-members/

In the short term the effect is zero because there is an estimated 50,000 tons of Indian buffalo beef currently sitting in BULOG and private cold stores within Indonesia and it would appear that the court ruling has no impact on the continuing distribution of product already in the country.

The big question now is, how the government will react to this ruling. In my view, the political will behind this importation is so strong that a way will be found to restart Indian imports while meeting the necessary legal requirements.

For example, there is a clause in the law that allows imports from lesser disease status areas in times of “emergency” such as natural disasters or sudden price rises.

I am sure that the government will find the necessary legal triggers to allow imports to recommence once again in the not too distant future.

In the meantime, the cold stores are holding large stocks so there is no particular urgency to get this done today allowing the political actors plenty of time to find the best solution to this short-term snag.

President Widodo visited Australia during the end of February and amongst other issues announced a number of new policies relating to the cattle trade including the increase of average weight of imported cattle from 350 to 450 kg and the extension of import permit cycle for live cattle from every 4 months to annually.

The 12 month import permit is a major win for everyone as it will prevent the silly waiting period for new permits every 3-4 months which has led to huge and unnecessary shipping bills which translated directly into more expensive imports for Indonesia and large financial losses for exporters.

The affect of the 450kg rule is not quite so clear. On the one hand, it definitely allows exporters to a much wider range of cattle to select from which would usually have the result of lower prices.

On the other hand, importation of cattle ready for slaughter only works if there is a trading margin and at the moment this is certainly not the case.

Unless the CIF price of heavy cattle imports can be forced down so low that it reaches a level below the current live weight sales price then there won’t be any joy. e.g. Today’s feedlot gate price is about Rp41,500 per kg live weight or using the conversion above AUD$4.06 per kg.

In order for an importer to find a trading margin it will be necessary to import for quite a bit less than $4.06 to allow for shrink, taxes, freight and a myriad of other charges which importers must factor into their margins after arrival.

Just for the exercise, lets say that all of the additional costs post arrival add up to about 10% of the CIF price or 40 cents.

Let’s also assume that the cost of sea freight and other exporting expenses are in the order of AUD$1 per kg. This means that the 450 kg animal needs to be purchased in Australia for $4.06 less $1.40 or $2.66 per kg to go close to breaking even.

So unless the prices of fat cattle in northern Australia take a significant tumble there doesn’t look to be too much business to be done here.

The 450kg change also came with an extension of the maximum age of imported feeder/slaughter cattle from 30 months to 48 months of age, so this is likely to rule out the return to the trade of aged cull cows which might have been able to match the required price reduction but consistently end up creating welfare problems all along the supply chain. Cull for age herd bulls are also excluded by this 48 month rule.

Another technical complication in respect to this policy change is that there is an existing law that all imported feeder/slaughter cattle must be retained in the feedlot for 120 days and as far as I am aware this law has not been changed at this time.

In spite of all this market turmoil, great beef continues to be available and sometimes in the least expected locations.

Last month I was in the East Kalimantan mining town of Balikpapan and had one of the best steaks I have eaten for a very long time. I was so surprised and delighted at the quality of my meal I spoke to the hotel staff who happily told me that the sirloin steak was from Australia (supplied by wholesalers ex Jakarta). Despite the fact that the steak was frozen and thawed for my meal it was still magnificent. Quite a testament to both the quality of Aussie beef and the training of the local chefs and food service supply chain staff. It was so good I went back the next night and had another one and it was just as good. If only they had some decent red wine. Someone had trained the chef and kitchen hand to know exactly how to produce the best eating steak from a frozen cut. 10 out of 10. Well done! 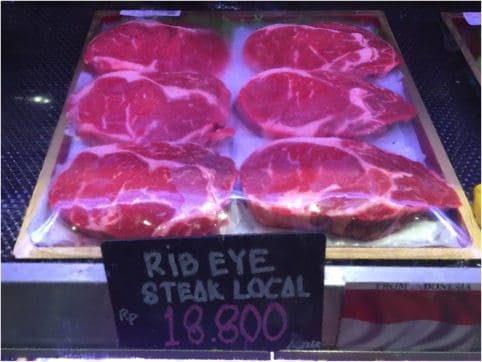 This locally produced (from Aussie feeders) rib eye looks pretty good and is selling at my local supermarket for a very reasonable AUD$18.80 per kg. And next to the local Rib Eye is this Tasmanian offering for more than double the price. I think I would pay the extra to get this one.

Demand and prices have backed off just a little after the Tet new year festivities.

In the north, imported slaughter cattle are selling at around D71k per kg live weight while bulls remain firm at D73 to D75k. Any overfat cattle are either heavily discounted or simply rejected by butchers.

In the South steers are selling for D68-69k which is about the same as last month while bulls are trading for D70 -71k.

Over fat cattle are currently discounted to as low as D60,000. I have used D68.5k again for this month’s indicator price.

There has been lots of talk of a ban on Australian live cattle as a means of retaliation for Australia banning Vietnamese prawn imports.

My source in Vietnam advises that in his view the retaliation will not be a direct ban but something more subtle like restrictions on cattle vessels which transit in third countries prior to arrival in Vietnam as well as a possible slow down on the issuing of import permits.

“White Spot” is a viral disease of prawns and until recently it was common in SE Asia (including Vietnam) but not present in Australia.

A recent outbreak on five farms near Brisbane led the Australian government to introduce a temporary ban on imports designed to protect the local industry.

Vietnam, China and Thailand are our major sources of imported prawns with a value of $620 million for a total of 48,000 tons imported during 2016.

The ban only relates to fresh product because cooked, marinated and crumbed prawns cannot carry the white spot virus. White Spot is not dangerous for humans but is quite deadly for prawns.

Naturally, Vietnam would be very concerned about the sudden loss of such a large and lucrative market although tit for tat restrictions by their government would not appear to be a very productive means of changing the biosecurity policy of the Australian government. Prawn infected with White Spot virus. No prizes for guessing the origin of the name.

Domestic prices remain steady with another slight reduction in the AUD rate due to a weaker Baht.

No change again for this market except for the relentless decline of the Ringgit falling almost 7pc since October and no sign of a slow down in sight.

A similar situation here with political concerns over the President’s policies causing significant weakness in the currency. The Peso has declined 4pc against the AUD over the same period from October 2016.

This continues the slowly increasing trend despite the ongoing drought conditions in Inner Mongolia which I would have expected to be helping to keep the prices weak until the drought breaks rather than allow them to rise.

Is this a similar situation to Australia recently where demand was so high it still allowed drought affected cattle to achieve a high price? 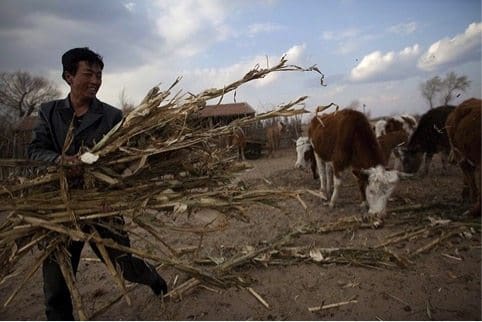 Photo from the internet: droughted cattle in Inner Mongolia.

The continued cull of smallholder dairy cows in the Shanghai area has once again weakened the price there from Y17.6 during the New Year festival last month to Y16.4 this month. With about 20 million dairy cows in China it might take quite a long time for the surplus cull cows to be eliminated from the system. 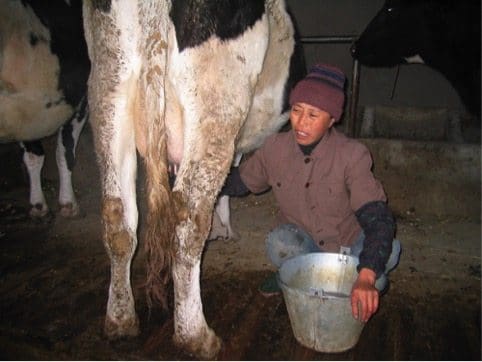 Small holder dairies in China are slowly going out of business.