Onboard perspective: Cruising with cattle during Covid-19

AS a result of the multiple cruise ship Coronavirus disasters, the Australian public quite understandably sees ocean going vessels as one of their most serious threats for future infections. In the case of cargo vessels including livestock carriers, the reverse is the case.

Visiting a port for loading or discharge represents the only opportunity for the crew to become infected with the outcome being a spectacular human and commercial disaster for both the crew, the charterer and the owner of the vessel.

The recent experience with the MV Al Kuwait in Fremantle is a good example.

In the event that someone onboard the ship infects a land based person during contact in port, that infected person will be quarantined and monitored once a diagnosis is confirmed, contacts will be traced and dealt with after which life goes on. If hospitalization is required then there will be well prepared facility not too far away.

In the event that a crew member is infected by a land based contact, the situation is far more serious. Assume the crew infection occurs in port A. The ship sails off towards port B and the symptoms appear in the crew member say 4 to 5 days out to sea. In the meantime, the infected person will have transmitted the infection to several other shipmates before symptoms were observed and effective quarantine measures could be instigated. Ships accommodation areas are relatively small, high density spaces so opportunities for transmission are plentiful. It is quite feasible that 10% or more of the crew could be infected before a suspect case is identified and control measures could be instituted. The total crew on my current ship is 37.

In advance of entering a new port the ship must report its health status along with all the other usual information required by the onshore authorities. What will be the response when it advises the port authority that there are a number of cases with Covid-19 like symptoms onboard? At best there will be delays to permission to enter the port until appropriate measures are taken to protect those land based contacts as well as preparing to deal with any crew that might need hospitalization. The vessel may be sent to anchor offshore while medical assessments are completed and a course of action decided. Delay, delay, delay. Sick crew members will be taken ashore to isolation or hospital while the vessel must wait at anchor while the infection plays out in the rest of the crew. This could take weeks. Business is halted, lives are disrupted and no clear end to the mess can be identified. Ships are such an expensive asset that this down-time is hugely disruptive and may even threaten the viability of the business.

The owners and officers of the vessel have already considered all of these potential scenarios and have very logically instituted extremely strict protocols to protect the crew from land based infection. By default this also provides highly effective protection for land based persons from the crew.

The ship protocols include :-

When all these measures are combined, the Australian public can be very confident that the crew of livestock vessels represent a negligible risk to the health of land based populations while they continue their vital work of exporting our livestock to ensure essential food supplies continue to flow to our international customers.

Spare a thought for the existing crew who have for the last 3 months been blocked from entry to any county in order to travel to the nearest international airport to fly home after their contract term has finished. Crew changes are not possible so everyone is forced to remain onboard until the pandemic situation improves to a point where international travel is available once again.   As I write this story from a cattle vessel, there are two Indian engineers onboard who joined the ship in Singapore to monitor some specialist equipment during the voyage to Fremantle. By the time they arrived in port the virus infection had become a pandemic and they were refused permission to leave the ship in order to fly home. Since then they have sailed to New Zealand, China, Townsville,  Vietnam, Townsville, Vietnam again and still have no idea when they might be able to leave.  After our next return to Australia, if they are not permitted to leave the ship when it docks in Gladstone, Queensland, they will sail to Chile where the ship will load with a cargo for China before they can have their next opportunity to leave the vessel and go home. The first person onboard in each new port is the Pilot (distant centre of photo with white shirt and mask – in Vietnam). The Captain and bridge crew are protected from infection by the Pilot with full PPE suits, masks and gloves. This is the only entry point to the ship where all visitors will be checked for permission to enter then undergo a temperature measurement and have their details recorded. Each person entering the ship has their temperature taken, must wear a mask, wash their hands in sanitizer and must be accompanied onboard the vessel by a crew member (blue suit bottom centre) who also wears a full PPE suit, mask and gloves. The onboard stockman, Dave Kermode (left), is dressed in PPE suit, gloves and mask to escort the Vietnamese quarantine staff for their inspection of the livestock prior to discharge. Since the terrorist attacks of 911, ports around the world have become extremely restricted areas so only essential personnel can gain entry to the port. In this photo of the discharge wharf in North Vietnam there are only the truck drivers and a modest number of stevedores. All must wear masks. This photo was taken by Dave Kermode in China at a recent discharge. The people in white PPE suits are the Chinese authorities (quarantine, immigration, agent etc) while those in dark suits are the crew who will accompany them to their specific destinations onboard. This photo is from Dave Kermode taken during a recent discharge in China with extreme precautions with stevedores loading trucks in full PPE and access blocked to the ship’s discharge ramp walkway. 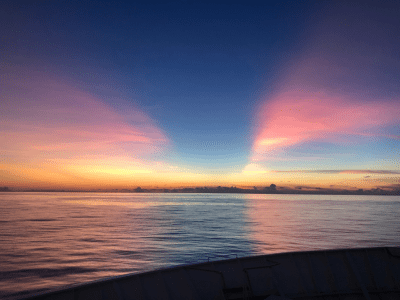 The South China Sea has lots of pirates and politics but there is definitely no virus out here.