Myanmar has by far the largest beef cattle herd in South East Asia with a population in the order of 15 million head, to support a human population of about 60 million. This herd represents more than all the other Greater Mekong Region cattle herds put together:

But the beef cattle herd in Myanmar really isn’t a tool for producing beef but primarily a source of draft power that is absolutely essential to drive the vital but largely non-mechanized Burmese agricultural sector. The Burmese beef cattle genetics are relatively good as farmers need to breed big, strong cattle to help them get their work done.

In addition to this primary need for the essential services of millions of draft animals, there are a host of other reasons why Myanmar is not likely to convert their very large cattle resource into a beef production machine within a decade or more.

Head of the list of secondary issues is border security or rather the lack of it. Ethnic rebel groups have been negotiating with the central government with some recent success but the most strategic trade route from northern Myanmar to China remains a no-go area with sporadic rebel fighting continuing to disrupt any chance of normal trading activities.  The Karen group in the south east facilitate the annual crossing of about 150,000 head of cattle and buffalo which are on-sold in the markets of the Thai border city of Mae Sot.  Local traders then distribute them far and wide across South East Asia from Hanoi and Ho Chi Minh, Bangkok and Kunming in southwestern China. This border trade is a revenue earner for the Karen rather than a national trading policy, which could easily be disrupted if the peace making process goes sour.

With the majority of the population of the Buddhist faith, the local slaughter of cattle and the domestic consumption of beef is very limited. Quality product for the big city hotel and restaurant trade is largely supplied by high value imports. In Yangon, wet markets stalls selling beef are very scarce and hard to find. The beef price at this stall was AUD$8.77 per kg when this photo was taken in December 2015. Myanmar is the only country I have found where the price of beef can be the same or less than chicken and pork!

Having outlined some of the short to medium term reasons for the status quo to remain, the incredibly strategic location of Myanmar in respect to China will probably mean that in about a decade or so, one of Myanmar’s most important exports to China will be live cattle or beef or both.

If you look at the map and imagine the plans that China probably has for regional development then the case for the opening up of Myanmar to Chinese trade and infrastructure seems irresistible. 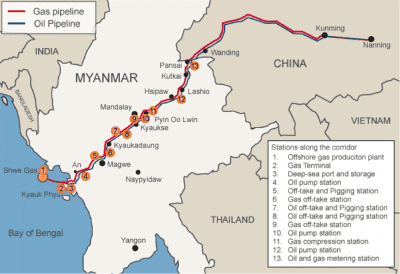 The map above shows how China currently accesses some of its oil and gas imports through the Bay of Bengal via Burmese pipelines. This is a very efficient route compared with the normal run where tankers must sail from the Middle East down through the Straights of Malacca, around Singapore and back up through the South China Sea to the east coast. This infrastructure is a win win for both countries.

China has also built a massive freeway and rail link (still under construction) which connects the primary national transport networks in the east to the tiny, far western border-crossing town of Ruili (near Pansai on the map above). There is nothing else for these incredible Chinese investments to achieve except facilitate huge volumes of trade to and from Myanmar and eventually continue construction all the way down to the major Burmese cities and coast as they have already done with the oil and gas pipelines. This new road is part of the incredibly expensive section of the G56 Hangrui Expressway connecting Kunming and Ruili i.e. a road to nowhere – unless it eventually continues on into Myanmar. The 3000 km G56 Hangrui expressway finishes at the bridge over the Ruili River (See photo below) which connects Ruili (China) with Muse (Myanmar). The Jiegao Bridge over the Ruili River between China and Myanmar (Muse) is the current end of the G56 expressway. The expressway connects the Hangzhou Metropolitan area on the east coast (21 million people) and much of southern China with the 165,000 Burmese living in Muse.

All that needs to happen for these astronomically expensive Chinese infrastructure investments to be put to good use for the cattle trade is :

The happy irony of the “failure” of the Burmese cattle industry to participate in the recent Chinese live cattle buying frenzy from Thailand, Lao, Cambodia and Vietnam is that this hoovering up of huge numbers of cattle occurred at relatively low prices. The resulting massive collapse of supply across the region now means that if Burma does eventually decide to generate exports from its very large and intact beef production resource it will be entering the market where the real prices are at historic highs.

Whatever happens, the future for the Burmese cattle producers is bright as their vitally important industry will be a winner with rising global values of beef cattle insuring that their “hidden treasure” beef herd will always be a huge asset to both the nation and individual farmers regardless of how it is utilized.