Slaughter steer prices continue their upwards movement within the government’s approved range of Rp46 to Rp48,000 per kg live weight.

Using a range of January prices from Lampung to Bandung, I have set the indicator rate at Rp46.5 for this month. I am advised that the government has also capped the retail price of fresh beef at Rp130,000 per kg for wet markets in the West Java region.

Unfortunately these rates are nowhere near enough to keep up with the continuing prices rises from Australia forcing both importers and butchers to absorb significant losses in order to keep trading.

Butchers responded with a three day strike from Wednesday the 20th of January across the greater Jakarta area. As reported in Beef Central, importers have reacted with a plan to import live feeder cattle from Mexico.

At today’s Mexican prices of about USD$2.10 per kg live weight farm gate combined with the use of the largest vessels, each carrying a little over 20,000 head, the preliminary sums appear to add up with an estimated CIF price of less than the current Australian import cost of around USD$3.80 CIF Jakarta.

The immediate challenge for Indonesia is to establish a workable health protocol from Mexico followed by the coordination of the financing which will require large sums to be committed many months before the Mexican feeders will be received, fattened and sold. Given the very unattractive options of continuing loss making imports from Australia or embarking on a high risk Mexican venture, it is fortunate for Indonesia that they have the option of importing cheap frozen Indian buffalo beef.

The quality of this product is clearly inferior to fresh beef but it still represents a high protein, red meat alternative which can be sourced in large volumes and distributed across the archipelago through well-established supply chains.

I am told that there is a substantial quantity of buffalo beef in Indonesian cold stores while Reuters reported in late January that the Ministry of Agriculture intended to import a further 100,000 tons of frozen product from Brazil and India to ensure supplies through the rest of 2021. A surge in smuggling of Indian buffalo from Malaysia to Medan across the straits of Malacca will also help to boost supplies.

With feedlot capacity down to 35-40 percent, imports of alternative sources of beef need to be expedited to ensure shortages don’t arise later in the year. 2021 Ramadan commences on 12 April with the Lebaran holiday from 13 May.

Beef is not the only commodity causing problems with rising prices.

Indonesia imports a large volume of its soybean requirements from the USA where prices have risen sharply in recent months. Soybean importers are required to sell their product at the Department of Agriculture ceiling price of Rp8,500 per kg while the average import price is currently Rp9,500. The faltering world economy, hammered by the impacts of Covid 19, political posturing and seasonal factors has precipitated multiple disruptions to world supply chains resulting in food price inflation across the globe. This is a new reality that consumers and governments will be dealing with for decades to come. Volatile food production simply can’t keep up with the consistent rise in world demand.

At the end of 2020 monthly cattle imports to Indonesia from all Australian ports were around 20,000 in November and 34,000 in December producing an annual total of around 467,000. Considering the difficult import environment at the beginning of 2021 it would not be surprising to see this figure reduce to somewhere closer to 350,000 for the coming calendar year.

Darwin feeder steer prices continue their spectacular rise, shooting past $4 with quotes of $4.10 not uncommon and even a reported bid for a small consignment at $4.25.  These sort of prices cannot last as none of our customers can afford them so an eventual decline is certain although it is unlikely to arrive until the northern dry season commences in May. In the meantime, a huge wet season, low national herd numbers, demand for feeders to eat the grass in southern Australia and the disappearance of “surplus” heifers from the feeder market to commence herd rebuilding are all working together to hold Australian domestic prices stubbornly high despite falling demand from importers.

Prices for cattle in Townsville are following a similar trend with slaughter stock suitable for Vietnam selling for around $3.90 per kg live weight while feeder steers are likely to cost $4.10.

In my last report I included a request for assistance with the cost of translation into Bahasa Indonesian. This appeal has been successful with a number of offers received. I accepted the first offer which was from the PT Arsi Indo Graha company based in East Java which supports the Indonesian beef slaughter industry through the introduction of safe and improved slaughtering practices from Australia. I am very grateful to this company for their support and also to the other companies and individuals that offered their kind assistance.

Slaughter steer prices are up again for the third month in a row with this month’s increase reduced to an average of Dong1,000 to produce an indicator rate for January of D81,000 per kg live weight.

There continues to be a large difference between prices in the north and the south with Hanoi rates for 500kg steers from D81 to D86,000 per kg while HCM city range is D78 to D80,000.

Bulls are more expensive due to their low fat content at Dong 83-85,000 per kg live weight.  These prices have resulted in a collapse of demand with abattoirs in the south killing a majority of local cattle while in the north slaughter numbers are much reduced in line with falling demand. National feedlot capacity is down to 60% and expected to decline further over the coming months. Vietnamese consumers appear to be refusing to pay higher rates for retail beef resulting in a rapid drop off in demand for Aussie imports. My reporter advises that retail rates are essentially unchanged over the past six months.

The national Tet holiday runs from February 10th to the 16th this year with the sharing of special meals with family members one of the most popular activities. Vietnam is under unusual pressure during this Tet period through a combination of diseases causing serious disruption to their national economy including a second wave of Covid 19 in the north along with the ongoing African Swine Fever (pigs) and Lumpy Skin Disease (cattle) reducing the supplies of popular foods across the region.

November cattle imports were about 33,500 while numbers declined in December to just over 20,000 head to produce an annual total of about 297,000. On the assumption that cattle prices remain strong for the beginning of 2021 it would not be surprising to see imports fall back to 250k or less for the current calendar year. Live buffalo from the NT are substantially cheaper than live cattle so there may well be a significant increase in buffalo exports to reduce the overall cost of shipments. Following my request for funding for the Indonesian translation, the Northern Territory Buffalo Industry Council Inc. has very kindly offered to translate this report into Vietnamese as this is a major destination of Northern Territory buffalo live exports.

Once again, slaughter cattle prices were relatively steady with an average of Y36.3 for Beijing and Shanghai. The Chinese New Year, the year of the Ox, runs from the 12th until the 26th of February in 2021.

Retail beef prices increased by about 3-5% in Beijing and Shanghai for both the wet markets and supermarkets. Pork prices also rose by similar levels in both cities. My advice is that this is due to a combination of factors including Chinese New Year holidays, Covid 19, reduced box beef imports, African Swine Fever and a traditional trend for increased consumption of beef during the winter months. 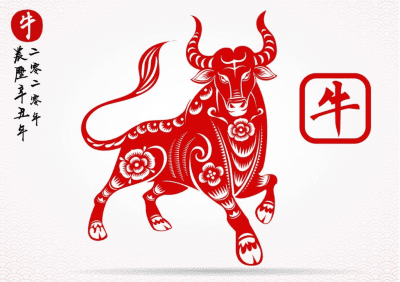 Photo from 2021happynewyear.com.  This is the year of the Ox.

Correction. As a result of a number of comments that the live slaughter cattle prices in my report were too high I contacted my source and have finally discovered the error which was essentially a language issue where my request for a live slaughter cattle price was not clear enough. This has now been corrected and a new price has now been provided which I hope and expect is in line with the rest of the cattle prices across the Philippines. Any further feedback to confirm this would be appreciated.

The new slaughter cattle price is 130 peso per kg live weight which converts to AUD$3.51 per kg.  This price is derived from Mindanao so it may vary from prices in other parts of the Philippines. I have adjusted the graph above and included the prices for the last two months to begin a new record.

For the 2020 calendar year a total of 20,800 cattle were imported which is an increase or around 30% on the previous year.

Slaughter cattle prices declined this month on slow demand which may well be a result of the recent surge in Corona virus cases. Slaughter rates slipped from 105 to 101 Baht per kg live weight during January while feeder prices fell even further from 130 to 120 Baht per kg live during the month.

As the graph below shows, Thailand has done well to keep its Corona infection rates to a low and manageable level for most of 2020 until December/January 2021 when cases have surged to over 800 per day. 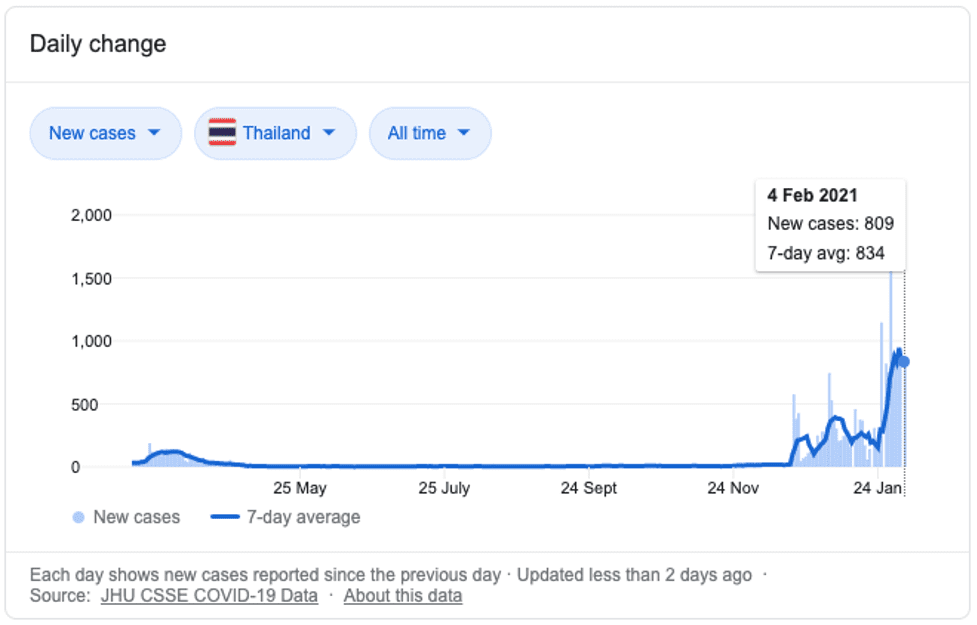 See the photo below from my December report showing some of the dry aged, grass fed Hereford beef presented at Neil’s Meats in the Prahran market, a suburb in east Melbourne. I thought it was a particularly fine display so I took this photo when my sister took me there just before christmas. Two nights ago, Lach Mackinnon very kindly asked me to his home for dinner (in another east Melbourne suburb). When dinner was served, his wife Sophie explained that the perfectly cooked, bone-in ribeye she prepared was Hereford beef from Neils meats in Prahran. Absolutely magnificent. Thankyou Lach and Sophie. And thankyou to the Hereford producer and Neil’s Meats. After eating every delicacy over the Christmas period there simply is nothing better than the best quality beef, cooked to perfection. Sorry turkey, lobster, chicken, lamb, pork etc. it’s an unfair contest because beef is so far in front it can’t be matched.