Fat cows are selling for as low as Rp38,500 in Lampung while rates of Rp41k or better are possible for the very best stock in West Java.

The weak market is probably a combination of two factors, reduced demand during the Islamic calendar month of “Safar” (this year it is 30th September until 28th October) which I am told is a time when celebrations, weddings and parties are less common while the large numbers ready for sale from the feedlots are simply too many for the market reflecting the large feeder imports during June (60k) and July (78k). This large feedlot output is still in its early stages so the animals offered are not overfat yet but if demand doesn’t pick up substantially then the numbers of very fat cattle will be significant by the end of November.

Butchers hate overfat cattle so the vicious cycle commences where fat cattle are retained because the feedlot hopes for a better price while these fat cattle grow still fatter at significant cost and the price offered falls even further. Preliminary figures for October suggest that imports were at a much more sensible level of around 45,000 head.  MLA has confirmed that the official import numbers for September were 45,000 head so the slaughter cattle market is likely to return to normal supply levels by January/February.

I have been informed by reliable sources that during October importers were advised that their import permits are once again freely available to all importers as long as they agree to follow the new requirement of importing breeding heifers at a rate of 5% of their feeder numbers.  A meeting of all importers has been called by the Ministry of Agriculture during early November to provide the industry with the details but it appears that any penalties resulting from previous breeder import failures have been cancelled. The timing of this new initiative is likely to be frustrated by the shortage of surplus breeding females available from northern Australia. See the MLA graph below showing the magnitude of the massive female slaughter rates in Queensland (low feed reserves cause farmers to sell their breeding cows to slaughter before they begin to starve). Once the northern drought breaks this coming wet season, the supply of surplus breeding heifers will dry up and the price of what is available will reach historic highs. 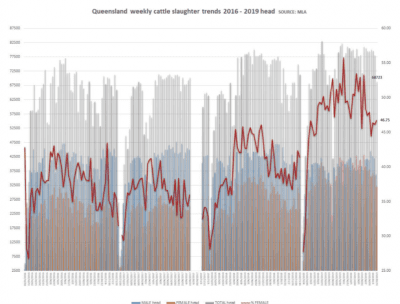 October saw Syahrul Yasin Limpo (NasDem politician) appointed as the new Minister for Agriculture. Mr Limpo is from Sulawesi and is a career bureaucrat and politician. I rang quite a few people around the industry but none that I spoke to had any experience dealing with him so we will just have to wait to find out his approach to Ag policies.

Traders report that there is plenty of Indian beef in the market place while there is still no confident predictions about when Brazilian beef will hit the market. What has been claimed by traders is that the price of this product is predicted to be higher than Indian buffalo but lower than Aussie product. Considering the impact of the drought and world markets on low end Australian beef, the future prices for this product are likely to rise strongly once the drought breaks so Brazilian beef might end up with a wide margin of safety below the limited and expensive Australian competition. See the photo below of Indian buffalo beef “Daging Kerbau” for sale in the Giant supermarket at BSD City, South Tangerang for a price of Rp80,000 per kg or AUD$8.33.

Darwin feeder steers prices for late October have been ranging from AUD$3.20 to $3.33. I will use $3.30 for this month’s indicator price. 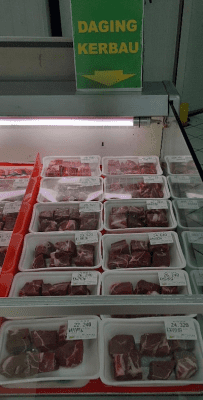 Slaughter cattle prices (for cattle sourced from Australia) have risen for the first time in many months with a jump of about Dong1,000 per kg across the board. This has taken the slaughter steer indicator rate to Dong74,000 per kg while bulls and the very best steers can achieve as high as Dong 77,000 per kg (AUD$4.87) in Hanoi where cattle prices are always higher than in the south.

Townsville remains the dominant port for Vietnam as it is ideally placed to supply the 80/20 slaughter/feeder mix currently required by the Vietnamese. Monthly shipping numbers are surging: 11,800 in July, 23,500 in August and 25,500 in September. The average monthly export for 2018/19 was 20,000 head.

My agents report that beef prices remain relatively stable so it appears that the main change is an increase in consumption volumes for beef rather than its  price. This seems to fit well with the fact that pork supplies are restricted due to the African Swine Fever (ASF) epidemic. It also accounts for the very large number of press articles promoting the production of locally bred cattle which are so desperately needed to help plug the widening gap between shrinking local supply and growing demand. 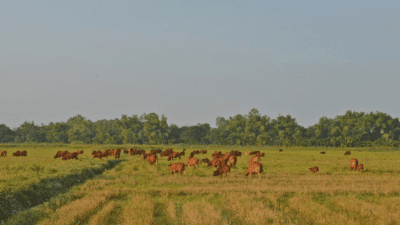 Photo from the internet:Vietnamese cattle are a very handsome and productive red Bos indicus breed but there is just too little grazing land available to allow for a significant recovery in the national herd. It can only go one way from here. 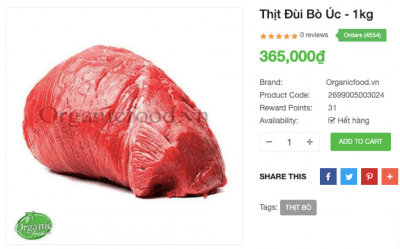 Vietnamese continue to be the most effective and aggressive internet beef marketers in the region. Dui Bo is knuckle. This price represents a 25% premium for Organic product.

Slaughter cattle prices have been relatively stable at their recent highs with the average of the rates in Beijing and Shanghai the same as last month at Y32.5 per kg. The same cannot be said for pork which my agents report has risen by almost 50% in Beijing and around 17% in Shanghai during October.

The ongoing catastrophe of ASF continues to play out across China (and the rest of the region) with the government desperately trying to increase imports by aggressively licensing new sources of imported beef, chicken and pork from around the world while they do their best to bring the epidemic under control so they can begin the massive task of herd rebuilding. The ASF map below does not show any new outbreaks recorded for the end of October but the overall picture remains a total disaster. Simon Quilty provided a valuable update on the ASF situation after attending a conference in China during the last week of October. A Chinese expert pointed out that for the next 3-5 years the local pork supply will experience a production gap of 15-20 million tons per annum. Total world exports of pork are about 8.5 million tons with EU, Canada and the USA producing 80% of this figure. ASF is already having enormous social impacts in related industries creating new sources of social and commercial disruption leading to unemployment and a reduction in the progress of national poverty alleviation programs. Just imagine the problems posed by the urgent need to dispose of 150 plus million pigs spread randomly across the nation in less than 12 months. The bottom line is that the only real hope for a relatively quick recovery (3-5 years minimum) is if a vaccine can be developed but this will take a long time to bring to the market so the tragedy will continue to roll on for many years yet.

China’s increasing demand for imports of meat will push the Australian industry to provide more product at a time when production is about to collapse with the end of the drought, whenever that might be. At least in the tropical north, a relatively normal wet season will see a very large proportion of breeding females retained in the herd which will result in a rapid fall in stock available for slaughter. The combination of this exceptional global demand at the same time as a collapse in the Australian capacity to supply will drive Aussie cattle prices to historic highs. A weakening AUD$ will only add fire to these flames. Photo from AsiaNews.it : so many dead pigs across China are creating huge disposal and environmental problems. The longer you delay, the worse it gets. Photo from the Vietnam News : simply burying so many dead pigs is an extremely difficult, slow and expensive process. Photo from ScienceMag.org showing ASF pig disposal in Russia. The cost, effort and environmental impacts of cleaning up are a very nasty additional burden to add to the initial loss of the pigs, jobs and future pork production.

Slaughter cattle prices have not changed this month although my agent reports that beef prices have made some small upwards moves in what is expected to be an ongoing trend if the ASF outbreak continues to expand.  At the moment the authorities have been successful in restricting the disease to Luzon but their chances of keeping it that way are limited given the experience in the rest of the region. As happened in China, pork prices have actually fell following the outbreak as a result of consumer concern and a flush of supply as producers slaughter stock over and above normal volumes to protect themselves against the future movements of the virus. Prices are likely to remain depressed for about 6 months when the shortage of supply begins to bite. FAO map showing a fresh outbreak in Luzon during the last week of October. Other new outbreaks continue across Vietnam as well as North and South Korea.

Slaughter cattle prices have dipped sharply across Thailand as a result of a new outbreak of Foot and Mouth Disease (FMD). This has caused local prices to drop to a range of 85 to 90 Baht per kg live weight. I have used a figure of Baht 87 for this month’s indicator price. FMD will result in the blocking of exports to regional neighbours as well as the general disruption to national stock movements. Thailand remains the only major pig producer in the region to continue to maintain its freedom from ASF. Photo from the Cobram Woolworths in northern Victoria late October : A great selection of beef with a few gaps in the offering because there were so many customers buying so much beef (including me) that the staff were having a battle keeping the shelves stocked. Well done Woolies.