Slaughter cattle prices have edged up slightly as the oversupply during December was not quite as serious as during November with the indicator price rising to Rp39,500 per kg. Overfat steers in Lampung have been discounted to Rp38,500 while high yielding steers can achieve Rp41,000 or more.

The Brazilian beef has well and truly arrived in Indonesia with lots of product in the wet markets of Java with prices as published last month (see list below). Knuckle remains around Rp90,000 per kg which keeps it just above Indian buffalo price.

Packaging in the photos below shows that both JBS (Friboi) and Minerva have significant volumes in the market. The Brazilian packaging appears to be much better than Indian buffalo. Photo from a Jakarta wet market : Friboi is one of JBS brands.

African Swine Fever (AFS) has now been formally confirmed by the Indonesian authorities as reported in the FAO update map below.

The official numbers as of the end of December are 28,000 pigs dead in North Sumatra since the initial deaths commenced on the 4th of September 2019. Sumatera and Java have only limited numbers of pigs while Bali and the Eastern Islands have large populations as their cultures are predominantly Hindu and Christian respectively.

Quarantine measures have been stepped up to help prevent the spread of ASF into these locations but given the huge numbers of Chinese tourists arriving on more than 10 direct flights from China to Bali every day, I don’t like their chances. 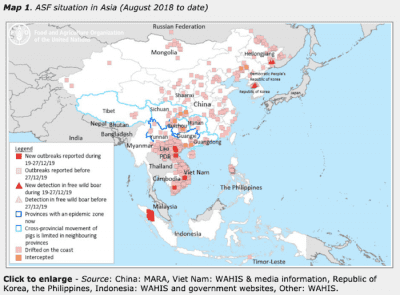 FAO Map : The Indonesian outbreak area shown in red above is in North Sumatera which is one of Indonesia’s main incoming smuggling areas as it is such a short distance across the Malacca Straits from Malaysia.

Darwin feeder steer prices have weakened a little to an indicator rate of $3.25 per kg landed Darwin at the end of December.

Slaughter cattle prices have risen again this month with Dong500 per kg live weight being added to most categories of stock.

This is despite a significant reduction in the demand for pork (down about 20 percent according to government figures) as consumers are put off by both high prices and negative sentiment from the general spectre of diseased pigs. The government has been trying hard to address these problems with a range of initiatives from dramatically increasing imports (100,000 tonnes for the Tet holiday period) to cracking down on traders hoarding product for the upcoming Lunar new year. Tet is celebrated by holidays from 24 to the 29th of January with the actual Tet New Year’s Day on the 25th)

Official statistics show that pork accounts for 70-75 percent of the diet of Vietnamese consumers, poultry accounts for 20-25 percent, while beef, buffalo, sheep and goats only about 5-10 percent. Aussie live cattle and beef producers are one of the few winners from the ASF disaster with even stronger demand likely in the short to medium term. Photo from the internet : Marketing of Aussie beef.

Slaughter cattle prices have remained steady with the slight reduction in the AUD price above due to currency movements only.

Beef prices in both wet and supermarkets are very erratic with no pattern to follow as beef and pork prices go both up and down in Beijing and Shanghai during December.

This level of market disruption is not surprising given the massive movements in supply and demand for all proteins as new outbreaks of ASF continue to appear while the Chinese government is scouring the world searching for additional sources of every sort of protein.

Almost every week there is an announcement in the press of a new deal being signed opening up access for another country to export products into China. The coming Chinese New Year festival period which runs from 24th to 30th of January will only put further strain on overstretched supply chains.

No change to the high prices for slaughter cattle in the Philippines as the domestic economy continues to charge along with low unemployment, strong demand and supply for food at steady prices so everyone can enjoy the new level of prosperity.

The Philippine authorities appear to be doing a good job of restricting the spread of ASF which is still limited to the original outbreak area in Luzon. Since the first confirmation on 25th of July there have been a total of 24 ASF outbreaks in 9 provinces of Luzon Island. As of the end of November 136,000 pigs had been depopulated.

Thai prices have increased sharply this month on the back of the promise of the new demand from Kunming. This has also resulted in a lift in the beef prices in the local wet markets. The potential demand from Kunming is huge so if this market gets going it will change the face of the Thai beef industry.

Thailand continues its combination of good management and good luck as it is one of the few countries which remains free of ASF.

I visited Ethiopia during late November. It is a very beautiful place but I was surprised by the primitive state of their domestic agricultural systems. See below the method of threshing the grain using heavy bulls walking in circles over the harvested grain straw which is then thrown into the air with wooden forks to further separate the grain from the chaff. Photo : The bulls have their mouths tied shut until the work is finished when they are fed on the remaining chaff. Photo : Across the country butcher shops are usually attached to a restaurant. You go to the window as seen in the photo above and order a specific type and volume of meat which you can either take away or have handed to the cooks through the window connecting to the restaurant. The price of the beef here is Birr$420 per kg = AUD$18.86 cooked to your requirements – usually with bread and salad. Photo : The beef counter inside the Fresh Corner shop. The knuckle was Birr 350 per kg = AUD$15.70 per kg. (the yellow things on the beef are slices of capsicum). Photo : Road infrastructure is generally good although there are very few cars or trucks using it in rural areas. The majority of smaller freight items are moved using either donkeys or mules or on peoples backs. Note the 3G digital tower in the background. Photo : everywhere there is a mix of ancient and modern – note this mule driver is making a call on his mobile phone. Photo : Ethiopia has Africa’s largest cattle population at about 55 million head. This is a weekly sale on the side of the road in the northern regional town of Mekele near the border with Eritrea. Bulls (guess 350 kg) in this market were selling for about Birr19,000 or around 54Birr per kg = AUD$2.44 per kg live weight. Given a combination of the translation difficulties and the reluctance of any traders to tell tourists their real prices this rate may be well off the mark. Beef in the local butcher shops/restaurants was selling for Birr240 per kg or AUD$10.77.