Despite the chaos in all markets including live cattle, prices have remained remarkably steady in Indonesia.

Demand remains weak as restaurants remain closed except for takeaways.

This continues to keep demand for offal at very low levels while hides are also facing a collapse in demand.

But people have to eat and some can still afford beef so with reduced food service demand pulling in one direction and the beginning of Ramadan pushing demand gently upwards in the other direction it seems that the outcome is a steady rate for slaughter steers with quoted prices ranging from Rp38,500 in Lampung to as high as Rp43,500 in Java. I will therefore hold the indicator at Rp39,000.

Reports of retail  prices vary between locations with prices of beef and chicken remaining constant in the BSD area while in central Jakarta prices of fresh food at the wet markets had increased by up to 25 percent.

Indian buffalo beef has almost run out although a few outlets in Jakarta still have some stock.

It appears the national orders for Indian product were placed too late to beat the virus shut down in India so only a small amount is on the water and is not expected to arrive until after Lebaran.

When the Indian supply chain opens up again is anyone’s guess.

The government has also placed orders for frozen product from Brazil (and I hear Argentina) but this will also take a considerable time (guess 6-8 weeks) until it is delivered into the market.

The growing trend of holding back locally bred males for the high priced Qurban festival puts a lot of pressure on slaughter cattle supply for the rest of the year so we may even end up with a shortage of fresh beef in the next two months until the Indian product arrives.

I am advised that there are about 190,000 Australian cattle on feed in Indonesia at the moment so there will be plenty of stock for sale if the market wants to buy them.

Official figures for imports were 34,400 head in March after similar numbers in January (30,400) and February (38,500), all below average monthly figures so there shouldn’t be a large number of overfat stock on hand, even though daily kill numbers are reduced.

Obviously, demand will be driven mainly by the course of the viral infection across Indonesia but the current situation appears from my perspective relatively encouraging.

See below a data presentation from the internet which uses historical death rates and compares them to current death rates with the aim of discovering a more accurate number of deaths caused by coronavirus.

Using this approach the estimate for deaths caused by corona for Jakarta during March was calculated to be around 1600.

While this is a terrible number, when the high population density and limited capacity of the health care system are taken into account, this number appears to be relatively low when compared to all of the other locations on the list.

Anecdotal advice on the current state of the infection in many locations across Indonesia suggest that this lower rate of infection is continuing. Perhaps the virus is not able to spread as easily in the tropical environment. Let’s hope so. 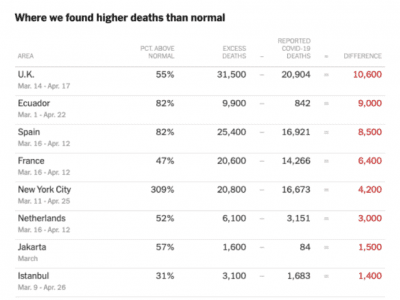 The Indonesian government announced that the proposed breeder cattle imports for 2020 had been cancelled as a result of the covid pandemic.

The graph below from the XE currency internet site shows how remarkably stable the relationship between the AUD and Rupiah has been over the long term. During the last 5 years the exchange rate has varied less then 10% either side of its current rate at around Rp9,800 to the AUD.

Darwin feeder steer prices crashed late in April with some significant sales occurring at AUD$2.60 per kg, a 24 percent drop from the end of March ($3.40).

Since these panic sales the rates have lifted to $2.80 at the end of the month with predictions that the price might settle at around the $3 mark once the selling season gets properly started in May. I have used the figure of $2.80 for the April indicator rate.

Among the mountain of bad news we see every day there is occasionally some good news for those of us involved one way or another in the beef industry.

Essentially, we are part of the global food chain and as disaster hits, see below how people, in this case in Spain, change their spending priorities. Food expenditure increased from about 20pc of total purchases to close to 60pc while almost everything else is reduced.

When the chips are down we are definitely in the right business! 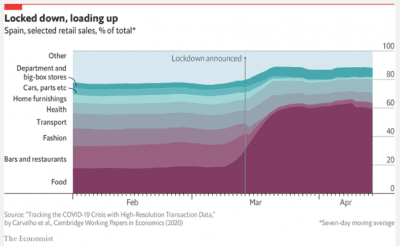 Prices have gone back up again this month with the indicator rate rising to Dong 72,000 per kg live weight.

Anecdotal figures for April are strong and seem to be continuing into May.

I am personally travelling with two shipments of cattle to Vietnam during May and I know of several others.

This encouraging ongoing demand may relate to the relatively low levels of coronavirus reported in Vietnam as a result of extensive lockdowns, testing and other measures taken since early in March.

The shortage of pork as a result of the African Swine Fever epidemic will also be playing a role in keeping demand for beef firm.

My Thai agent reports large exports of cattle into Cambodia during April with the majority of these almost certainly being re-exported to the slaughter markets servicing Ho Chi Minh city.

Prices have eased slightly this month with rates in Beijing down to Y31 and Y31.8 per kg live weight in Shanghai.

Many wet markets remain closed in Beijing while they are now open in Shanghai.

Chicken and pork supermarket prices are up in Beijing while beef remains steady.

In Shanghai where both wet and supermarkets are open, pork prices are up while beef and chicken prices are down.

Prices of cattle and beef have remained stable during April while the cost of most other food items have fallen.

Rice, pork, fruit and vegetables have all seen lower prices as people simply didn’t have enough income to purchase at the usual levels as well as the existing government mandated fixed prices.

Thankfully the Visayas islands and Mindanao (except for the Davao city) are about to be released from quarantine as they have had much lower cases of the virus than experienced in Luzon.

Borders remain closed with Myanmar (imports) and China (exports via the Mekong river) while a new buyer from Cambodia has entered the market with demand for about 1000 head of slaughter cattle per week which are almost certainly finding their way through that country into south Vietnam.

The end result of these market forces has been a rise in the slaughter cattle rates from the high 80’s last month to 95 Baht per kg in April.

China is importing up to 1000 slaughter cattle per day from north eastern Myanmar through the Shan state border crossing of Muse at prices of about AUD$2 per kg live weight so it is not surprising that the market is not yet open for much more expensive cattle via the northern Mekong river route out of Thailand.

My source tells me that the virus pandemic is gradually being brought under control across Thailand with consistently decreasing cases so he is hopeful that internal movement restrictions will begin to be reduced in the coming weeks. King photography: offal @ AUD$7.32 and beef @ $9.77 at Klongtoey market which is the largest wet market in Bangkok. Photo from King Photography : wagyu beef from the On Nut Makro supermarket in Bangkok. King Photography: a roadside beef stall in a suburb in Dhaka, capital of Bangladesh. King Photography: slaughter bulls in a Bangladesh. Impressive cattle in an excellent facility.