The Muslim festival of Ramadan was celebrated from 23rd of April until the 23rd of May followed by the Lebaran holiday on the 24th of May.

Despite the huge disruption caused by the virus, many Indonesians still managed to celebrate these festivals with the most popular way being to enjoy a special meal with family and friends.

Those who prepare these meals try to provide everyone’s favourite family dishes including (if they can afford it) the more expensive products just like the christmas dinner in the west.

Beef is one of the most sought after meals so this festival period has always resulted in a rise in beef demand and prices. This year the increase in demand was present albeit rather subdued. The result was a slight rise in slaughter cattle prices of about Rp1,000 per kg so the indicator rate for May has edged up to Rp40,000 per kg live weight for a slaughter steer.

The April import total for feeders reached 37,000 head which was similar to the monthly rates since January (30,000), February (38,500) and March (34,400). Anecdotal evidence is that the May figure is also close to this number. These monthly volumes are very encouraging for future local market conditions as in the past any numbers greater than 50,000 per month invariably resulted in an oversupply followed by a build-up of overfat cattle and the inevitable downward spiral of buyer resistance, discounting and losses. With an average of less than 40,000 per month offsetting the reduced demand during the pandemic, prices and returns have a much better chance of remaining stable with benefits to both importers and consumers alike. During the one to two month period following Lebaran, demand for beef is traditionally subdued.

My agent in Jakarta reports that Indian beef was no longer available at the local supermarket at the end of May and this was one of the last outlets with buffalo product on retail shelves so it appears that last year’s supplies of Indian buffalo beef have finally ran out. The absence of buffalo beef may also have contributed to the slight rise in demand during Ramadan and Lebaran as locally slaughtered fresh beef and imported Australian beef would have been the only retail options available. I have just been advised by my old friend Robi Agustiar, Indonesian consultant and ex NT station manager, that 672 tons of Indian buffalo beef has just arrived in Jakarta in the last few days. This will provide product to the low end food service sector for a month or so before further supplies arrive from India and Brazil. Movement restrictions associated with the pandemic appear to be easing around Indonesia at least in a limited way so restaurants frequented by travellers like the many Padang style outlets may well begin to contribute to a slow recovery of demand including the important sales of offal to help offset the cost of the beef carcase. 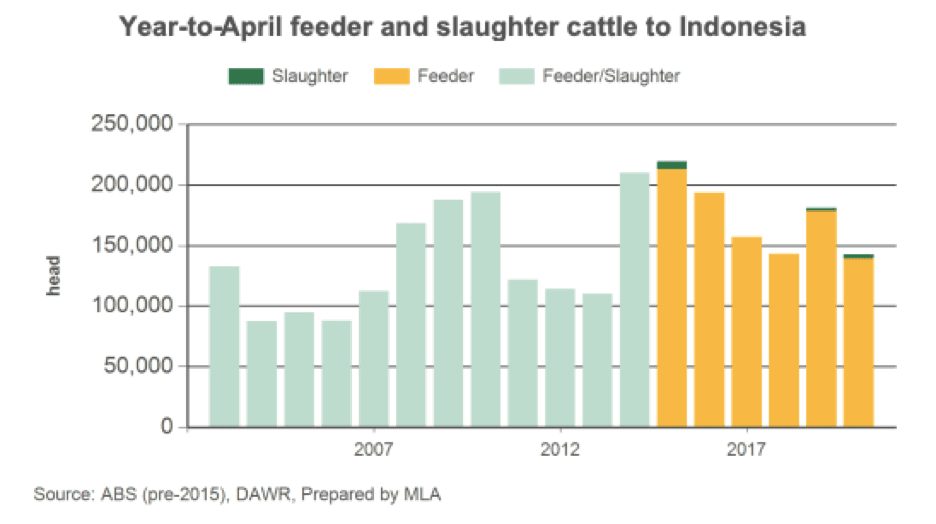 The graph above from MLA suggests that imports for the year to date have been within the recent pre-virus range. If the worst of the pandemic affects are behind us then hopefully demand for the rest of the year may well remain at close to normal levels. Aussie feeder cattle prices will also play a major role in determining Indonesian demand for the rest of 2020.

Darwin feeder steer prices continue their high level of volatility with a rate of around $3.25 at the end of May with even a few quotes as high as $3.40. This follows the wild ride from $3.40 in March to $2.80 and even lower in April.

The table below from MLA lists cattle exports by port showing that Townsville has overtaken Darwin as the main live cattle export port for Australia. Slaughter cattle prices have remained stable in the local currency while live shipments continue at levels significantly higher than previous years, see graph by MLA below. Import numbers for April were 16,500 following an average of about 22,000 for the previous 3 months. Live imports continue to be sourced into south Vietnam from Thailand via Cambodia which is helping to support the Thai domestic prices.

The majority of Vietnamese stock are sourced from Townsville as they currently prefer a mix of about 80% slaughter and 20% feeder cattle. The current market in Australia is extremely fragmented and volatile with a huge number of factors pulling supply and demand in different directions. Some of the latest events of significance include the sudden closure of access to the Chinese market for four large processors while AMH Dinmore has closed its doors for reasons that I am yet to understand. On the one hand, these closures have reduced demand while a generally reduced herd size,  rainfall in some areas and strong demand from interstate has resulted in some serious shortages of supply of slaughter and restocker cattle. If the net result of this tug of war is stronger prices for slaughter ox and bulls then this could well result in a significant slowing of the Vietnamese shipments. 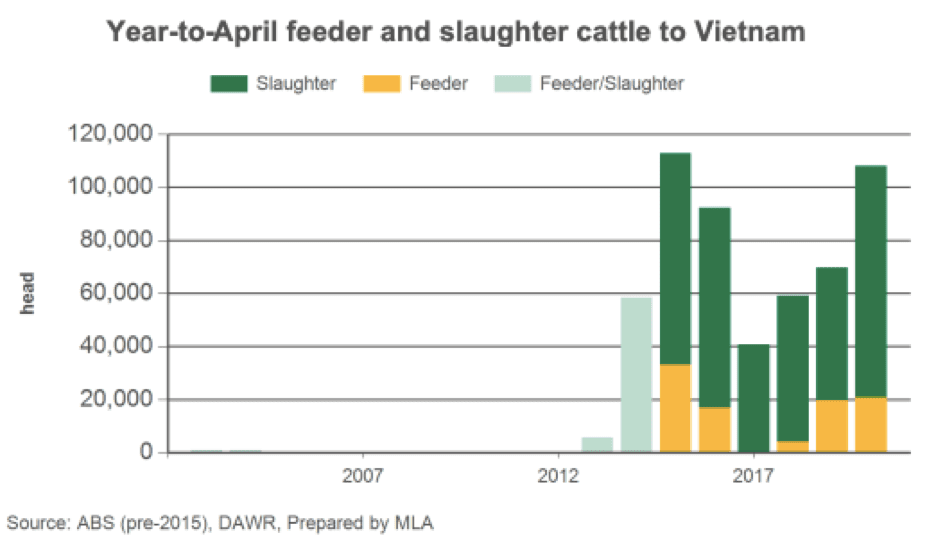 ASF continues to have a serious negative impact on pork production with plenty of ongoing outbreaks especially in the north. See OIE map below. My agent reports that the price of live pigs and pork across Vietnam have reached record highs of around Dong100,000 per kg live and Dong200,000 for pork (AUD$6.58 live and AUD$13.16). In response, the Vietnamese government is increasing imports of both beef and pork from many sources around the world. The Yuan has weakened a little against the AUD while the local price average between Shanghai and Beijing has increased slightly to 31.8 Yuan per kg live weight. More wet markets are open in the Beijing area with prices of all the reported items as erratic as usual. Press reports state that the Chinese economic activity is back to 90% of pre-virus rates.

Amid all the Covid-19 virus drama, the ASF pandemic has slipped out of the news but is still creating havoc for pig producers across Asia. A worrying new development is the identification of ASF infection in wild pigs on the China/Russian border, in the North/South Korea border area and also in Hubei province in central China. Chinese authorities appear to have been quite successful in clearing ASF infection from domestic pig production units but dealing with infection in wild pigs is another problem altogether.

As always, in a crisis with lots of losers there are some winners. Many of the very large, sophisticated pig producers who would have already been practicing high standards of biosecurity as a normal part of their production systems have been able to keep the virus out of their facilities and are now enjoying the fruits of strong production, limited competition and sharply higher prices.

If you think that the corona virus is bad then have look at the CV of the cause of ASF which is a member of the Asfarwiridae virus family.

The ASF virus is much more resilient and deadlier than Corona. OIE summary map for late May 2020 : Note a new infection in N. E. India and the wild boar infections shown by green triangles. Australians know only too well how hard it is to control wild pigs so when they are infected with a killer virus the nightmare is many times worse.

Prices of slaughter cattle and beef have remained stable once again during May. Most areas of the Philippines are now beginning to emerge from lockdown with restrictions limited to wearing masks and social distancing. Prices of food have remained remarkably stable so there was no need for the government to step in and enforce official price controls.

Just a slight increase in local prices for slaughter cattle during May from 95 to 98 Baht per kg live weight. The same market forces are in play as last month with the Myanmar border still closed to imports and the Cambodian buyers still active, sourcing export slaughter cattle for southern Vietnam. The local feeder steer price is Baht 105 per kg or AUD$5.02 per kg live weight. King photography: at the big Klongtoey market in Bangkok once again. 230 Baht = AUD$11 per kg. I am still on a cattle ship, just sailing out of Townsville for my third voyage taking more slaughter cattle to Vietnam for Patrick Underwood’s Australian Cattle Enterprises (ACE).

The ship’s officers are from Croatia while the crew are all Filipinos. I am very pleased to report that the chief cook, Goran Banicevic, is an absolutely outstanding operator working in a very well appointed galley stocked with high quality raw materials. The excellent beef is Australian product from AMH. No complaints. Chief cook Goran in his spacious and well-appointed galley is able to turn out an outstanding range of meals. This AMH product is a huge step up from my last ship which had stocked up with rather tough Brazilian beef supplied by the Singapore provedores.