FUNDS raised by Australian live cattle exporters have helped to expedite the building of a new educational centre to benefit visually impaired and disabled children and adults in Indonesia.

Every year at their annual conference Australian livestock exporters raise money via a charity auction for individuals who have suffered loss through personal tragedy or to support organisations such as the McGrath Foundation, Beyond Blue, Royal Flying Doctors, Foodbank, and the Isolated Childrens Parent’s Association.

At the 2015 LiveXchange conference in Darwin, hosted by Livecorp and the Northern Territory Livestock Exporters Association, a decision was made to donate the proceeds of that year’s charity auction to the Rawinala special school for children with Multiple Disabilities and Visual Impairment (MDVI) in Jakarta. 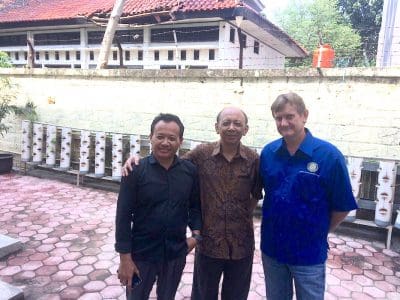 Rawinala chairman Pak Dwi (centre) celebrates the opening of the new building with the building contractor and Dick Slaney.

For eight years the Rotary Club of Jakarta Cilandak, through its then president and now treasurer Dick Slaney, a well-known Australian livestock export industry identity in Jakarta, has been trying to raise money to build a new teacher training facility at Rawinala.

Rawinala is one of only a small handful of MVDI schools throughout Indonesia. This means that 99 percent of affected children have no opportunities to access formal education and support.

$62,000 was raised at the 2015 Livexchange charity auction to go towards the building of the Rawinala teacher training facility.

After eight years of fund raising efforts by the Rotary Cilandak members to build the new facility, the injection of funding from the livestock export industry fast-tracked the process.

With that funding boost the new building has now been completed, and it was officially opened in Jakarta on the weekend.

From this week, the 224 square metre, two-story building will begin training teachers from across Indonesia to provide education to MVDI children and adults in their own communities around the country.

NTLEA chief executive officer Stuart Kemp, who attended the opening on the weekend, said the export industry’s contribution was around 30pc of the cost of building the centre.

“It means a lot to the Australian export industry stakeholders to be able to make such a difference in the community in Indonesia and it was a real pleasure to attend the opening on behalf of the export industry,” he said.

“The new training centre will train teachers to work with children and adults across Indonesia living with MDVI.

“Rawinala is a remarkable facility and seeing the children at Rawinala who live with MDVI, playing music and singing for the opening was quite a moving and very grounding experience.

“The staff at Rawinala do an amazing job teaching these kids independence and providing joy and real quality of life.”

“The centre commences with the first intake today in fact on its long road to increase the educational facilities for MDVI children in Indonesia.

“The Australian live cattle industry played a genuine role in our rotary club being able to realize our dream as quickly as we did.

“Within 18 months of that Darwin charity auction we have our training centre.

“It will stand for years as testimony of the generosity and kindness of the industry.

“Rotary club Jakarta Cilandak is forever thankful for everyone who helped to raise these funds.”

Driven by an awareness of the importance of education for blind people, the Dwituna Rawinala Education Foundation was established in by several Javanese Christian Church activists.

The name Rawinala is derived from Old Javanese, meaning light of heart, which means that “although they can not see, they can see through other senses, including their hearts and feelings”.

Scroll through images below for more pictures from the opening: