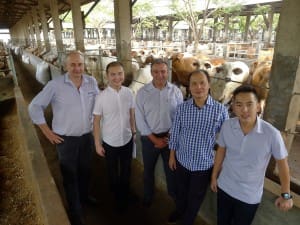 A visit to Indonesia earlier this month represented something of a renewal of ties with the live export sector for Ruralco managing director John Maher.

Earlier in his career Mr Maher spent several years working closely with the live cattle trade, firstly as an international livestock marketing manager for the Australian Meat & Livestock Corporation, and then as the general manager of livestock for Wesfarmers Dalgety. He also served as an inaugural director of LiveCorp.

Today, as the MD of Ruralco, Mr Maher is responsible for managing a diverse and growing publicly listed company that runs the largest network of independently owned rural agency, merchandise and real estates stores in Australia.

Ruralco’s agency network has strong exposure to the livestock sector throughout Australia, but until recently it had no direct involvement in the live export trade.

Mr Maher told Beef Central that a move into the live export sector had been on Ruralco’s agenda for “quite a while” prior to its decision to establish the Frontier International Agri live export business this time last year.

Part of the company’s motivation in launching a bid for Elders Rural Services in June last year lay in the opportunity the move presented to get into the live export space, Mr Maher said.

As history records, Ruralco’s bid to acquire Elders Rural Services was rejected by the Elders Limited board, which described the offer at the time as “inadequate with respect to value, execution risk and other considerations”.

Frontier International Agri made its first shipment in May of this year, and Mr Maher told Beef Central last week that he has been happy with the fledgling business’ performance so far.

Since its launch in May, Frontier has exported 32,000 cattle in 10 shipments.

He told Beef Central that there were three key purposes for his trip.

“One was to meet Frontier’s customers, and obviously to reinforce to them how committed Ruralco is in partnering with Frontier in the live export trade,” Mr Maher said.

“Secondly, I am very conscious of the fact that we want to be dealing with people who are operationally excellent, and so it was important, for me personally as much as for the reputation of Ruralco, that I saw the professionalism of the operational side of our customers, and I came away very satisfied with that.

“The third thing was that I really was keen to see the strength of the relationship between the Frontier staff and their customers in Indonesia, and it exceeded expectations on that front as well.

“Their relationships are very strong, I am very impressed with how they operate, we’re delighted we have partnered with them.”

There is no doubt that Ruralco timed its entry into the live export business well.

When news broke of its plans to launch a livex division early last October, Australia’s northern cattle shipments were running at barely a trickle, under Indonesia’s policy of limiting imports in an attempt to become self-sufficient in beef production by 2014.

However, in late October the outlook for the trade improved dramatically when the SBY Government suddenly abandoned its goal for self-sufficiency by 2014 and opened the import floodgates to relieve a severe beef supply shortage in Indonesia.

The emergence of Vietnam as a major buyer of northern live export cattle has added further strength to the recovery, as has expectations that a new protocol with China could soon open an Australian feeder and slaughter cattle trade to the market (it already buys breeding cattle and dairy cattle).

Mr Maher said there were expectations when RuralCo decided to move into live exports last year that demand would turnaround, but the strength of the recovery had still come as a surprise.

“There was a general belief that it would recover and we were fortuitous in the timing in that respect,” Mr Maher said.

“I think the upside of live export is probably stronger than a lot of us had thought going forward.

“And with Vietnam coming online, and then if the China protocol comes to pass then it is all looking fairly strong isn’t it.”

Mr Maher said RuralCo was heavily focused on keeping a strong and clean balance sheet to ensure it was well positioned to invest in various sectors depending on where opportunities emerged.

“Obviously we see and we’re continuing to see the growth of live exports, so we have got the balance sheet to continue to invest in that if the opportunities keep arising.”

Asked if the company might look to invest in live export trade infrastructure in South East Asian markets, as Elders has done with a  feedlot and abattoir in Indonesia, Mr Maher suggested it was possible.

Mr Maher said he plans to undertake a similar trip to Vietnam and China to visit Frontier International Agri’s customers in those markets as well.