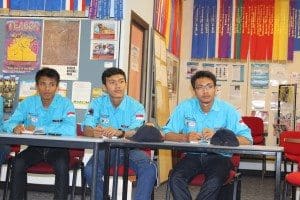 A record 20 agricultural science students from Indonesia have arrived in the Northern Territory to participate in the 2015 Australia Indonesian pastoral student exchange program.

Now in its fourth year, the program was launched by the Northern Territory Cattlemen’s’ Association in 2012 to give animal science students from Indonesia the opportunity train in, experience and understand the northern Australian cattle industry.

The students, from 11 universities throughout Indonesia, are completing an intensive two-week pastoral training course at Charles Darwin University’s Katherine campus, before spending six weeks working in a hands-on role on cattle stations.

The exchange will then be reciprocated when representatives of the 10 cattle stations hosting the 20 students in pairs travel to Indonesia to learn more about the major export market for their cattle.

The Northern Territory Cattleman’s Association describes the program as “a mutually beneficial cultural learning experience that enriches our understanding of our closest Asian neighbours”.

For some of the students this is the first time they’ve left Indonesia, let alone been on a cattle station.

CEO of the NTCA, Tracey Hayes, said the students come from a variety of backgrounds and were representative of Indonesia’s very diverse society.

“We’ve got male and female students from across many different provinces, representing different cultural and religious backgrounds,” Ms Hayes said.

“Each student will all undergo an intensive course in cattle management and then will live, learn and work on a Territory cattle station.

“For many of the students, life on a cattle station will be a complete culture shock. Blistering heat, wide open landscapes, sleeping in swags, moving herds of cattle that number in the thousands – all part of life on the land but so very foreign to our Asian neighbours.

“This program is about taking young Indonesians who have an interest in the cattle industry and showing them what it’s like in Australia.

“We are forging international relations directly between Indonesia’s future industry leaders and our cattle stations.

“The exchange will allow participants to identify synergies and linkages between our two nations and cultures.

However, beyond that, this program is a form of grass roots diplomacy.”

In January this year the NTCA travelled to Indonesia to interview candidates for the program. Hundreds applied, around seventy students made it to interview stage from across eleven universities; however, there were only 20 places to fill.

Subsequently in March this year, at the NTCA Industry Conference, the Deans from the eleven universities along with representatives from the Indonesian, Australian and Northern Territory Governments signed a Memorandum of Understanding to continue the work of the program in to the future. Indonesian and Australian government and industry representatives conducted the offiical signing of the 2015 Indonesian Australian pastoral student exchange program at the NTCA conference in Darwin in late March.

A large component of the training at the campus is focused on equipping the students with skills to ensure their safety when they commence six-week work placements on cattle stations throughout the Northern Territory.

Instructors will take them through basics in livestock handling, horse and bike safety, fencing, working at heights and in confined spaces and first-aid.

Rebecca Gowen from Argyll Consulting, which helps to run the pastoral student program with the NTCA, said the students came to Australia with a good knowledge of theory surrounding cattle nutrition and genetics, but with no practical experience in Australian cattle operations.

“The practical experience they recieve here is quite different to the small numbers in Indonesia and small areas and very quiet cattle, and cattle which you can lead around with a halter,” she explained.

“So this whole concept of big cattle, big spaces, large numbers of cattle, is very foreign to them.”

Mr Biggs said that in several years time, some of the students involved in the program were likely to be in key policy decision making and advisory roles in Indonesia.

“And they will be able to say when they look to Australia, I know that industry, I have worked in that industry, I know what it is like, so keeping this program going for our economic interests, especially in the northern part of Australia, is vital.”