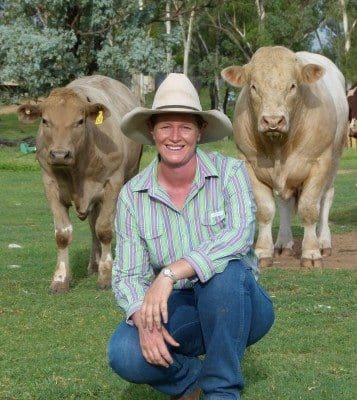 The purpose of the competition, which is organised by LiveCorp and Meat & Livestock Australia, is to evaluate the performance of Australian cattle in Indonesian feedlots, to highlight improvements made in Indonesia, to showcase the skill of Indonesian lot feeders, and to connect Australian producers with the Indonesian industry.

Ms Hartwig will visit the four Indonesian feedlots entered in the competition next month to conduct a visual assessment of the Australian cattle on feed.

Ms Hartwig started her own Charolais stud called Tanic at the age of 15 with her sister Nicole. In 2008 she won the National Junior Judging title.

Today she helps to run her parents’ commercial cattle property as well as Tanic Fitting Services, which specialises in preparing cattle for showing, and running cattle assessment schools for juniors.

“Tania was chosen to judge because of her experience in teaching others how to visually assess cattle and her knowledge across all aspects of the industry,” LiveCorp chair David Galvin said.

Ms Hartwig continues to judge at local Queensland shows and is involved in her local carcase competition.

“I am really excited about travelling to Indonesia to inspect the cattle and to see how our Australian breeds are performing in the feedlots,” Ms Hartwig said.

Ms Hartwig will be assisted by Febrina Prameswari, who currently works for the Live Export Program (LEP) in Indonesia and graduated from the 2014 Northern Territory Cattleman’s Association student exchange program.

The Competition will be judged by combining points from the visual assessment, carried out by Tania, and daily liveweight gain.

The steers are awarded up to 40 points for visual assessment components, such as conformation, fat cover and temperament and up to 60 points for liveweight gain.

The winner will be announced during the LEP Expo in Indonesia on 6-7 April.

“When you are feeding cattle you want the highest daily weight gain as it results in more product and income at the end, however how an animal stands and walks and how it behaves all have an impact on the end result,”Ms Hartwig said.

The cattle entered in the competition include Brahman, Charbray and Limousin-cross from well known Northern Australian cattle stations.

Mr Galvin said the competition would help producers of the cattle understand how they perform in Indonesian feedlots and how their breed might compare with another.