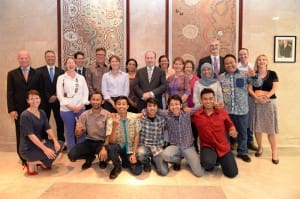 Northern cattle producers and Indonesian pastoral student exchange students meet with digniaries at the Australian embassy in Jakarta. Click on gallery at bottom of page to view more images from the tour

For the past three years the Northern Territory Cattleman’s Association has brought Indonesian animal husbandry students to northern Australia to learn about Australian cattle production systems and to foster greater cross-industry understanding of the unique challenges faced by producers in both countries.

Several of the Australian host families then visit Indonesia to reunite with the students they hosted in Australia and to learn more about Indonesian agriculture and its requirements as a market.

The NTCA recently completed its reciprocal tour to Indonesia for 2014, leading a delegation which included Mataranka Station manager Stuart Austin and his wife Trisha Cowley, a beef extension officer with the DPI&F in Katherine.

Mr Austin told Beef Central upon his return that the value of the relationships being forged between Australia and Indonesia’s cattle industries through the program was impossible to measure.

‘These people-to-people relationships cannot be valued in dollar terms…’

“These people-to-people relationships cannot be valued in dollar terms but hold an immeasurable value in terms of our industry and partnerships in our most important live export market,” he said.

“One can only hope that the powers that be at a Territory and Federal level are able to grasp how important these relationships are to both Australia and Indonesia.”

A total of 34 Indonesian students have participated in the first three years of the program, and the NTCA is hopeful the initiative can continue to grow with ongoing support from the $60m Australian-Indonesian Red Meat partnership in future.

NTCA executive director Tracey Hayes said Indonesia was an incredibly valuable trading partner for northern Australia and the student program was playing a critical role in helping to develop strong and mutually beneficial relationships for both cattle industries going forward.

For northern cattle producers, trading with Indonesia was not simply about “sending 700,000 cattle into a market and then walking away.”

“It is very important for us to have an understanding of the environment Indonesian farmers operate in, the challenges and the opportunities they face, and to contribute through information exchange and assisting them to achieve their production goals,” Ms Hayes said.

Ms Hayes said some of the Indonesian students involved in the first student intake in 2012 were now actively employed in Indonesia’s agricultural sector.

A highlight of the NTCAs recent tour of Indonesia was a function at the Australian embassy in Jakarta where former students gave presentations to dignitaries from both countries about their time in Australia.

2014 student Febrina Prameswari spoke eloquently about her time in Australia, while the delegation also heard from 2012 student participant Wahyu Bolan. Upon graduating from university in 2013 Wahyu worked for an Indonesian cattle importing company and now works for Meat & Livestock Australia in Indonesia under the guidance of MLA’s Indonesia region manager John Ackerman.

‘It was a really powerful and incredible experience…’

“It was a really powerful and incredible experience,” Ms Hayes said of the recent tour.

“The intangible benefits this will bring, it is very hard to put a measure on it.

“Some of the students come from villages of one million people where they are just one of many, and they are given this opportunity to come out to Australia, to learn how to ride a motorbike, to ride a horse and to drive a car.

“They are from villages where no one owns cars, and it is just an incredible experience for them.

“When they go home their families are so incredibly proud of them.”

Ms Hayes said it was gratifying to see the pride that senior Indonesian Government officials took in hearing first-hand about what their students had achieved in Australia.

“They were very proud of what these students have done, they have a strong awareness now of what the program is all about and they want to see it continue to grow and prosper.”

Ms Hayes said the success of the program stemmed largely from the strong level of industry buy-in and producer support involved.

NTCA members gave up their time freely to contribute to the program because they understood the value of building relationships between Australia and Indonesia, she said. She also acknowledged the support the program had received from the Indonesia-Australia Partnership on Food Security in the Red Meat and Cattle Sector, MLA and the Northern Territory Government. 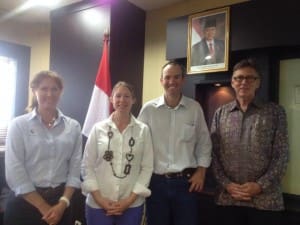 Earlier this year the Indonesian students spent a week with Mr Austin at Mataranka and then two students Choiral Badriyah (Yaya) and Ismail Yusuf (Yusuf) returned to Mataranka Station for a week of station work experience.

“I am particularly passionate about this program as it is so critical to building people to people relationships between our two countries, that spread far beyond just those of us involved in the program,” Mr Austin said.

“They are by far my most favourite students that train at Mataranka with such an energetic and enthusiastic attitude.”

Mr Austin said the story of former student Wahyu, who now works for MLA in Indonesia, epitomised why the program exists. “He credits his experience in Australia as being one of the most important things he has done in terms of what he does now,” Mr Austin said.

The program proved as much a learning experience for the Australian cattle producers involved as it was for the Indonesian students.

The delegation visited a diverse range of agricultural facilities while in Indonesia. Mr Austin said a personal highlight was a visit to the BPTU-HPT Padang Mengatas Training Farm.

The 280ha farm allows Indonesians to be trained in cattle farming before purchasing their own cows. It currently runs 700 cattle and will reach 900 head at the end of the year when a shipment of Simmental breeders arrives from Western Australia.

Mr Austin said the climate and landscape was reminiscent of the Atherton Tablelands with deep volcanic soils providing plenty of nutrients for the improved pastures.

“This was the first place we had seen cattle in paddocks and on grass and were impressed by their management practices that they were trying to pass on to students.

“The Simmental breeding herd were on a 15 day rotation, with goals/standards up in lights on the wall in the main building of a 34.5kg birthweight, 130kg weaning weight, 0.8kg/day weight gain, and 120cm hip height at 205 days.”

He said everyone involved in the program should be immensely proud of what it has achieved to date.

“It is something the students will never forget, and neither will we,” he said.

“Who knows, they might just be handling our cattle when they arrive in Indonesia in years to come.”